Engineer-General Karl Andreevich Schilder is credited with having constructed the first submarine in Russia with an iron hull. Built at the Alexandrovsky Works plant in St. Petersburg and completed in May 1834. The boat had an egg-shaped form, two towers with access hatches and was equipped with an optical viewing tube, one of the first periscope devices for submersibles. An armament of mines and two triple-tube mountings for launching rocket projectiles was to be provided. To defeat an enemy vessel by using the mine it was necessary to stick a core of the mine in a hull, to move away to a safe distance and to blow up the mine by electric fuse.

Trails took place in September 1834 on the Neva River and the nearby island of Kronshtadt in the Gulf of Finland. The craft demonstrated an ability to submerge and was judged quite successful. An improvement version, equipped with diving plane to help control the craft underwater, was constructed in 1835, and with this second boat Schilder successfully destroyed a target ship with a mine in July 1838.

Trails with this boat were regularly conducted near Kronshtadt through 1841, but after some unexplained failure during trails in the fall of that year, Schilder was ordered to halt further experiments-as the boat was recognized unable for combat purposes. Lieutenants Zhmelev and Adamopulo were the first submarine commanders in Russia. 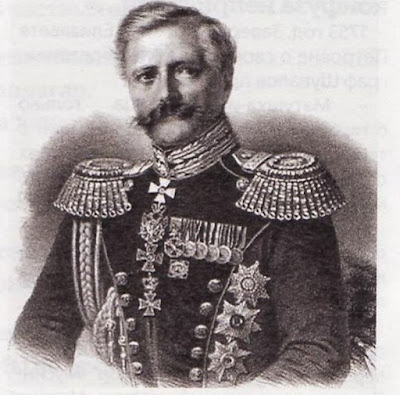 Shilder graduated from a school for column leaders in 1806 and served in the engineer troops as commander of a sapper company and a battalion and as chief of engineers of a corps and of an army.

Shilder developed a new and more effective system of countermining, using horizontal and inclined passages rather than vertical shafts. He also devised antipersonnel mines, stone fougas-ses, and canister mines. He produced an original design for a suspended rope bridge in 1828 and a “wineskin bridge” of quickly assembled, portable pontoons made of rubberized canvas in 1836. Between 1832 and 1836, Shilder and P. L. Shilling developed a method of setting off powder charges electrically.

Between 1838 and 1848, Shilder and B. S. Iakobi built electrochemical and electrochemical-contact naval mines. Shilder provided the designs for the world’s first all-metal submarine, built in 1834, and the Otvazhnost’, built in 1846; the world’s first steamship armed with artillery and rockets, the Otvazhnost’ was a prototype of the destroyer. Among Shilder’s students were the talented engineers E. I. Totleben and M. M. Boreskov.