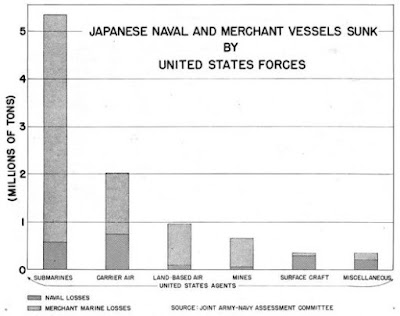 One day after the Japanese attack on Pearl Harbor on 7 December 1941, Chief of Naval Operations Admiral Harold R. Stark declared unrestricted submarine warfare against Japan. On the outbreak of the war, the U. S. Navy’s Asiatic and Pacific Fleet submarine forces included 55 large boats and 18 medium-sized ones (out of a total of 111). Some 73 submarines were under construction.

Yet until 1 April 1942, U. S. submarines only sank a modest 93,300 tons of Japanese shipping, less than one-tenth of what an average of 100 operational German submarines sank in the same period. At this stage of the war, American submarine operations suffered from the early loss of the Philippines, for which the poorly developed Australian submarine bases could not compensate. In addition, operations were hobbled by a doctrine that required submarines to concentrate on enemy heavy warships and by the chronic problems of the Mark XIV torpedoes.

Following the erratic performance in 1942 that yielded a total of 620,616 tons of Japanese merchant shipping, the U. S. submarine campaign gathered pace in 1943. The smaller Sclass coastal submarine and the T-class fleet submarines were gradually replaced by the larger and more capable submarines of the Gato, Balao, and Tench classes. Beginning in mid-1942, the U. S. Navy began installing the first SJ surface search radars in the submarines, which further enhanced their combat value (German submarines, by comparison, only received radars in mid-1944), and in October 1943, the torpedo problems were finally resolved.

The Japanese mercantile fleet amounted to 6.4 million tons at the time of Pearl Harbor. Following the cessation of neutral shipping to Japan, this volume was barely sufficient to cover the needs for industrial and civilian imports (3 million tons) and the movement of troops and supplies across the sea. The situation was briefly alleviated by the capture of 1 million tons of merchant ships during the Japanese advance in early 1942. By mid-1943, however, the U. S. submarine campaign had already eaten up these small gains made by captures and new construction.

In 1943, the U. S. submarine service was fully committed to the war against the Japanese sea lines of communications, even though an operational order issued by Admiral Chester W. Nimitz in June 1943 still listed aircraft carriers and battleships as prime targets. Key traffic patterns of Japanese shipping had been identified, and American submarines operating from Pearl Harbor and Australian bases conducted systematic patrols of such choke points as the “Luzon bottleneck.” Because the Japanese navy failed to respond to the increasing threat and organize valuable transports and cargo vessels into convoys, Japan lost merchant shipping weighing a total of 1,668,000 tons in 1943, of which 1.34 million were claimed by submarines. The volume of imports into Japan fell from 35 million tons in 1942 (already down from a peacetime level of 67 million tons) to 27 million in 1943. In late 1943, the Japanese navy reluctantly committed itself to convoying some of the more valuable transports and cargo ships, but the assets assigned remained woefully short of what was necessary to stem or even reduce the bloodletting. In addition, Japanese escort vessels possessed neither active sonars nor radars, and their depth charges were ineffective. Nonetheless, U. S. submarine losses were substantial.

In response to the Japanese convoys, the U. S. Navy introduced the Coordinated Submarine Attack Groups-small, ad hoc wolf packs. Throughout 1944, U. S. submarines continued to inflict crippling losses on the Japanese merchant marine, amounting to 2.43 million tons. In 1944, imports dropped to a mere 16 million tons. The figures for the key materials were even more alarming. Oil imports fell from 1.75 million barrels a month in August 1943 to 360,000 barrels in July 1944. After September 1943, only 28 percent at best of the petroleum shipped from the southern regions actually made it to the home islands, and during the last 15 months of the war, only an average of 9 percent did. By the time the massive strategic air attacks began to lay waste to Japan’s cities, a substantial part of the industry located therein was already idle due to the lack of materials. The destruction of more than 3 million tons of Japanese merchant shipping in 1944 left barely enough tonnage to cover the basic military requirements of the Japanese army and navy.

During this phase of intensive war on the enemy’s sea lines of communications, the U. S submarines also achieved some remarkable successes against Japanese warships. During the Battle of the Philippine Sea on 19 June 1944, they claimed 2 Japanese carriers (Taiho and Shokaku), and during the prelude to the Battle of Leyte Gulf (for which no less than 29 submarines had been deployed), they sank 2 heavy cruisers and fatally damaged a third on 23 October 1944.

Toward the end of 1944, the diminutive Japanese escort force was raised to the status of an escort fleet and provided with somewhat better means, including aircraft, simple radar sets, and useful depth charges. Thus, in the last quarter of 1944, the Japanese antisubmarine forces reached their peak efficiency (as did the U. S. submarines), sinking four U. S. submarines in October and another four in November. Thereafter, crushing Allied naval and air superiority and the lack of fuel oil put an end to most organized Japanese naval activities, although not before U. S. submarines had scored further spectacular successes against the Japanese fleet. In November, the U. S. submarine Archerfish sank the giant carrier Shinano on its shakedown cruise and the Sealion dispatched the battleship Kongo, and in December, Redfish’s torpedoes claimed the new carrier Unryu in the East China Sea.

The number of U. S submarine successes-of any kind- declined steeply in 1945 for want of suitable targets and because of a highly successful mining campaign in the Japanese home waters that year, which claimed the lion’s share of the 1.6 million tons of Japanese shipping lost in 1945. U. S. submarines entered the last sanctuaries of Japanese shipping in the Sea of Japan in June 1945 to ravage the remnants of the Japanese merchant fleet but found targets exceedingly scarce thereafter.

During the last months of the war, the submarines were confined to seeking what little coastal traffic had managed to escape the mine barrages and the attention of American aircraft. When the war was over, Japan’s merchant fleet had been reduced to 12 percent of its prewar size, and only half of the surviving ships-a paltry 312,000 tons of mostly minor vessels were in operation due to fuel shortages.
In addition to their economic impact, the American submarines played a decisive role in paralyzing Japan’s maritime empire in the western and southwestern Pacific by denying the Japanese the use of their interior lines of communications for the movement of troops and equipment by sea. Thus, they facilitated the advance of the U. S. amphibious forces, which could safely bypass the immobilized and isolated Japanese island garrisons.

The U. S. submarine service started the war with 111 boats, added 203, and lost 52 (50 of them in the Pacific). Of the 16,000 submariners who sailed on war patrols, 3,506 did not return- a casualty rate of 22 percent, the highest of all arms in the American services during the war. Nevertheless, the U. S. submarine campaign in World War II was the only campaign of its type in the history of naval warfare that can be rated a complete success. The submarines played a decisive role in the war by incapacitating the Japanese Empire’s economy. Of the 7.8 million tons of Japanese merchant shipping lost between 1941 and 1945, nearly two-thirds (4.8 million tons) was sunk by U. S submarines, which were also responsible for one-third of the Japanese warship losses. The U. S. Submarine Operational History, however, conceded that scholars would do well to “ponder the fact that Japanese anti-submarine defenses were not the best. If our submarines had been confronted with Allied anti-submarine measures, the casualty list of the submarine force would have been much larger and the accomplishment of Allied submarines much less impressive” (Van Der Vat 1992, 339). 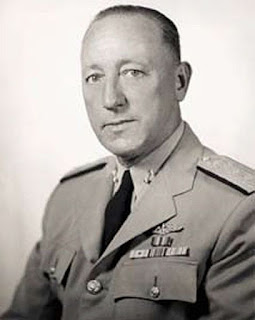 Charles Andrew Lockwood, Jr.
(1890-1967) U. S. Navy admiral who served as commander of the Pacific Fleet’s submarines from 1943. Born on 6 May 1890 in Midland, Virginia, Charles Lockwood graduated from the U. S. Naval Academy in 1912. He commanded submarines during World War I and then evaluated captured German U-boats after the war. He spent most of the interwar years in the submarine service. He taught at the Naval Academy from 1933 to 1935, before becoming chief of staff to the U. S. Fleet submarine commander between 1939 and 1941.

When the United States entered World War II, Lockwood was serving as U. S. naval attaché to Great Britain, a post he retained until March 1942, when he was promoted to rear admiral and became commander of U. S. submarines in the southwest Pacific. Lockwood assumed command during a difficult time. The navy had recently reorganized his command and relocated it to Australia. In addition, U. S. submarine commanders were experiencing serious problems with unreliable torpedoes. Lockwood led the way in ordering tests to determine the cause of torpedo failure. These experiments eventually resulted in securing properly functioning weaponry for the submarines.

In February 1943, Lockwood became commander of submarines in the Pacific Fleet, and that October, he was promoted to vice admiral. Under his direction, the U. S. Pacific submarines became the most effective submarine force in history, utilizing radar, signals intelligence, improved torpedoes, and more aggressive tactics to sink two-thirds (5.3 million tons) of Japanese merchant ships and a third of Japanese warships, at a cost of 52 U. S. submarines sunk.

Lockwood also played an important role in developing procedures to rescue aircraft personnel. In 1943, he adopted a plan that posted submarines in various locations to retrieve downed pilots. This program, dubbed the “Lifeguard League,” led to the safe return of more than 500 Americans shot down over the Pacific.

After the war, Lockwood went on to serve as navy inspector general, Office of the Chief of Naval Operations. He stayed in this capacity until his retirement in September 1947. Over the next two decades, he wrote several books about his experiences. Charles Lockwood died in Monte Serena, California, on 6 June 1967.