The American View of the Type XXI Submarine 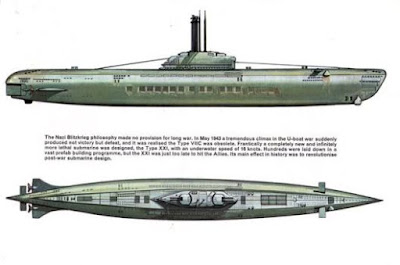 This U-boat was very hush-hush and off-limits to ordinary souls. However, when she shifted her berth to “our” pier (and nicked us in the process), we became friendly with the American crew and gradually talked our way on board for a look-see. We learned that she was U-2513, a brand new Type XXI “electro boat,” one of two such craft allotted to the U.S. Navy as war prizes. Commissioned and commanded by one of Germany’s most famous U-boat “aces,” Erich Topp, she and her mass-produced sister ships had been completed too late to participate in the war.

In our superficial examination of U-2513, we were quite impressed with some of her features, especially her top speed submerged. She had six sets of storage batteries, comprising a total of 372 cells (hence “electro boat”), which enabled her to quietly sprint submerged at about 16 knots for about one hour. This was twice the sprint speed of our submarines and sufficient to escape from almost any existing antisubmarine warship. Alternately, the large battery capacity enabled her to cruise submerged at slower speeds for a great many hours, whether stalking prey or escaping.
The next most impressive feature to us was her Schnorchel, or as we anglicized the German, snorkel. This was a sophisticated “breathing tube” or mast with air intake and exhaust ducts, which enabled U-2513 to run her two diesel engines while submerged. By rigging one diesel (or both) to charge the batteries while submerged, she could in theory remain underwater for prolonged periods, thereby greatly diminishing the chances of detection by enemy eyes or radar.

Nor was that all. Her periscope optics and passive sonar for underwater looking and listening were much superior to ours. Her ingenious hydraulically operated torpedo-handling gear could automatically reload her six bow torpedo tubes in merely five minutes. A third reload could be accomplished in another twenty minutes. The thickness and strength of her pressure hull was said to give her a safe diving depth limit of about 1,200 feet, twice our safe depth limit and sufficient to get well beneath most existing Allied depth charges. She even had an “automatic pilot” for precise depth-keeping at high speeds.

Much later, when some of these details and others about the Type XXI “electro boat” leaked out, they caused an utter sensation in naval circles. Prominent experts gushed that the Type XXI represented a giant leap in submarine technology, bringing mankind very close to a “true submersible.” Some naval historians asserted that if the Germans had produced the Type XXI submarine one year earlier they almost certainly could have won the “Battle of the Atlantic” and thereby indefinitely delayed Overlord, the Allied invasion of Occupied France.

The American evaluators on U-2513 were not so sure about these claims. In the classified report they sent to the Chief of Naval Operations, dated July 1946, they wrote that while the Type XXI had many, desirable features that should be exploited (big battery, snorkel, streamlining, etc.), it also had many grave design and manufacturing faults. The clear implication was that owing to these faults, the XXI could not have made a big difference in the Battle of the Atlantic. Among the major faults the Americans enumerated:
The U.S. Navy did in fact adopt some of the features of the Type XXI “electro boat” for its new submarine designs in the immediate postwar years. However, by that time the Navy was firmly committed to the development of a nuclear-powered submarine, a “true, submersible” that did not depend on batteries or snorkels for propulsion and concealment. These marvels of science and engineering, which came along in the 1950s, 1960s, and later, were so technically sophisticated as to render the best ideas of German submarine technology hopelessly archaic and to assure the United States of a commanding lead in this field well into the next century.
Posted by Mitch Williamson at Monday, March 14, 2016
Email ThisBlogThis!Share to TwitterShare to FacebookShare to Pinterest
Labels: Technical, U-Boat
Newer Post Older Post Home