The Schnorchel and D-Day 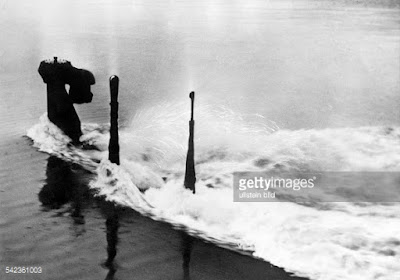 Its camouflaged snorkel head (right) trailing two extended periscopes, a U-boat runs swiftly just below the surface on a shakedown cruise in calm waters. The snorkel's air-intake and exhaust valves allowed a submarine to use its powerful diesel engines while submerged.

Dönitz recognized that "surface warfare for U-boats had come to an end." What he desperately wanted and was waiting for as 1944 began was a true submarine instead of a mere submersible-a vessel that could travel rapidly underwater, stay there for weeks, and attack while submerged. Such a submarine-a compromise version of the long-proposed Walter boat - had been under development since the previous summer. Dönitz had approved its construction in July, realizing that the Walter boat, with its volatile hydrogen peroxide propulsion system, might take years to perfect.

The electroboat, as it was dubbed, represented a new stage in submarine development. It adopted Helmuth Walter's streamlined double hull but operated on conventional diesel and electric engines. The second hull, which stored fuel in the Walter boat, enabled the electroboat to triple its bank of storage batteries, increasing not only underwater speed but the length of time the vessel could travel submerged.

Another innovative device, called the Schnorchel, or snorkel, was a collapsible mast with two tubes that protruded just above the water. The tubes made it possible both to run the diesels to propel the boat and to recharge batteries for the electric engines while submerged at periscope depth. Fresh air to feed the diesels and ventilate the boat came in one tube, and exhaust gases went out the other.
To build the new boat, Albert Speer launched a crash program based on the prefabrication techniques that the Americans had pioneered to build the merchantmen they called Liberty Ships. Each submarine was constructed in eight separate sections, which were manufactured individually at eleven different sites. The sections were then transported to shipyards at Hamburg, Bremen, and Danzig for assembly.

As a stopgap, Dönitz ordered his technicians to fit out existing U-boats with the snorkel. It was an improvement but not a panacea. Though covered with foam rubber to absorb radar impulses, the protruding head of the snorkel stirred up a trail of foam and exhaust gases that could be spotted in the daytime from the air. And U-boats at periscope depth had to travel slower than six knots to avoid breaking the snorkel off.

During trial runs, a problem cropped up in the float valve in the snorkel's head. This mechanism was designed to keep out water and let in air. But in rough seas, the valve tended to jam closed, cutting off the flow of air. The engines, if not shut down immediately, then sucked the air out of the boat, creating a partial vacuum that left the men gasping for oxygen and sometimes damaged their eardrums when the air pressure finally equalized. If a U-boat developed diesel engine trouble while snorkeling, carbon monoxide fumes could incapacitate, and even kill, the crew members.

The men were willing to trade these problems for a measurable increase in their chances for survival. They could submerge by day, operating electrically on freshly recharged batteries, and then snorkel at night, safely out of reach of the hundreds of Allied planes that now patrolled the Atlantic. If need be, they could stay off the surface for weeks. One boat established a wartime endurance record of sixty-nine days underwater.

Only a portion of the U-boat fleet could be equipped with snorkels before the Allied invasion of western Europe, expected in the spring of 1944. Dönitz prepared to oppose the assault with every means at hand. He ordered the nearly sixty U-boats at bases in Norway and France to stand ready to converge on the invasion armada: "Every vessel taking part in the landing, even if it has but a handful of men or a solitary tank aboard, is a target of the utmost importance that must be attacked regardless of risk.''

To many of his commanders, the orders sounded desperate, even suicidal. By some accounts, staff officers who briefed the commanders and crews interpreted the instructions to mean that the U-boats were to ram the enemy ships as a last resort. Harald Busch, a war correspondent assigned to the U-boat branch, later wrote that few men took this interpretation to heart. Busch recalled that the submariners adopted a prudent motto for the invasion: "He who surfaces is sunk!"

The immense fleet of ships and landing craft that shuttled back and forth across the English Channel on D-Day-June 6, 1944-presented the most tempting targets in the history of submarine warfare. Some 4,200 vessels carrying men and supplies plied the narrow waters between England and the Normandy beaches. But hundreds of Allied warships and thousands of planes prevented the U-boats from even getting near them. Day and night, patrols overflew every square mile of the Channel and surrounding waters at least once every thirty minutes.

Only those U-boats with snorkels could remain submerged and survive the first few days of action. The others were sunk, damaged, or forced to turn away. It was June 15 before snorkel-equipped boats scored the first meager successes, sinking two frigates and a landing craft.

Late in August, advancing Allied armies forced the U-boats to evacuate bases on the Bay of Biscay and retreat to Norway. Thanks to the snorkel, all thirty boats ordered there safely made the passage around Ireland and Scotland. But the summer's dispiriting statistics summed up the increasing futility of U-boat warfare. Between D-Day and the end of August, the forces deployed against the Allied armada supplying the Normandy invasion sank five escort vessels, twelve merchantmen, and four landing craft while losing twenty boats of their own.
Posted by Mitch Williamson at Tuesday, July 14, 2015
Email ThisBlogThis!Share to TwitterShare to FacebookShare to Pinterest
Labels: History, U-Boat, Weapons
Newer Post Older Post Home