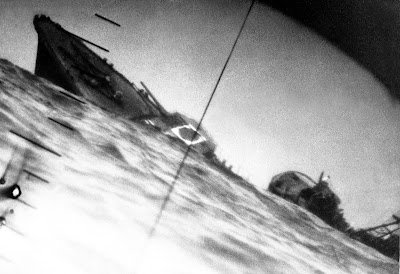 The more important reason for this lack of success in sinking Japanese merchant shipping, however, was the Mark XIV torpedo – the principal weapon then used by the fleet boats. The Mark XIV was a steam torpedo armed with a 500-pound warhead and the Mark VI magnetic exploder, which was designed to set off the torpedo’s warhead when the “fish” was directly under the target’s keel, thus breaking its back. For a variety of economy and security reasons, the interwar-designed Mark XIV torpedo was inadequately tested before it was introduced into the Fleet. Incredibly, its complex magnetic exploder never underwent a live firing test. As the result of these serious lapses, for the first 18 months of the war US fleet submarines were patrolling with defective torpedoes, which ran at depth settings some 11 feet deeper than set and whose magnetic exploders often failed to explode even on those occasions when the torpedoes ran at the proper depth. The number of sinkings by US fleet boats during this period could have been three or four times higher if their torpedoes had not been defective.

A big advantage which the United States submarine fleet had, which partially offset these early problems, was the Navy’s ability from the first days of the war to read significant portions of Japanese naval codes and ciphers. Indeed, the first Japanese warship loss was the submarine I-773, sunk by the fleet boat Gudgeon which was alerted to the passage of Japanese submarines through waters near Midway by the code breakers of Fleet Radio Unit Pacific (FRUPac). At first, intelligence information (derived from cryptanalysis) on the location of Japanese warships was passed informally and on an ad hoc basis from FRUPac to the staff of Commander Submarine Force, Pacific Fleet (ComSubPac). In early 1943, however, FRUPac solved the “maru” code – the special code in which the Japanese transmitted convoy routing messages. By this time, the Japanese had been forced to organize all of their tankers, freighters, and transports (designated “marus” because that was the second word in their names, as in Hikawa Maru) into centrally-directed convoys with specified routes and schedules, to protect them against submarine attack. Thus, the solving of the maru code enabled the US Navy cryptanalysts to derive accurate locations and meeting times for Japanese merchant convoys. From this point on, a FRUPac staffer met with a counterpart from ComSubPac on a daily basis to plot the location of such convoys with the known positions of US submarines on patrol. This new information made it possible to direct submarines to mid-ocean contacts with Japanese merchant shipping targets, thereby avoiding long and fruitless searches. As the numbers of available submarines and torpedoes increased and the problems with the Mark XIV torpedo were solved, this intelligence greatly increased the deadliness of the submarine offensive.

The shortage of available submarines gradually eased during 1942 and disappeared by the fall of 1943. Thirty-six new fleet submarines joined the force in the Pacific during 1942. Fifty-two more fleet boats arrived during 1943, and 76 in 1944. At war’s end there were 169 fleet submarines in the Pacific, together with 13 S Class boats being used for antisubmarine warfare training. As the new fleet subs reported, the inadequate S Class boats were transferred to the Aleutians or retired from service. The new arrivals comfortably outpaced submarine losses, although these too mounted proportionally as the war progressed. While only seven subs were lost to enemy action in 1941-42, 13 were lost in 1943 and 19 in 1944.

The original plan for employment of the US submarines had been to place them at the so-called focal points of enemy shipping – the entrances to the Inland Sea and off the principal harbors of the Japanese Mandates, Formosa, the Philippines, and the Dutch East Indies. As increasing numbers of new fleet boats deployed, more and more of these focal points were patrolled simultaneously.

Finally, in late 1943, there were more than enough operational submarines to cover all of these vital target areas. It was at this point that the submarines began operating in coordinated attack groups or “wolf packs”. Unlike the German U-Boat wolf packs, however, which contained 15 or 20 subs and were centrally controlled by radio communication from shore bases, these US groups consisted of three or four boats coordinated by a leader, often the senior submarine commander in the pack, who maintained local radio contact with his force. When a convoy was encountered by one of the subs in the wolf pack, she would vector her packmates into position for an attack. The attack itself though would not be coordinated. Each of the subs would attack the convoy independently. Because the Japanese never operated large convoys – four to eight marus escorted by from one to four destroyers or escort vessels was average – there were a number of occasions when a submarine sank a convoy single-handed.

By the fall of 1943, the submarine force also had added a new weapon to its arsenal, the long-delayed Mark XVIII electric torpedo. The Mark XVIII was a mixed blessing to the submariners. Because it was electrically propelled it left no tell-tale track to give away the submarine’s position. However, it was a much slower torpedo than the old Mark XIV and thus had a far lower margin of error for target tracking. Yet, with both types of torpedoes in sufficient supply, fleet boats at last were able to go out on patrol armed with full complements of weapons.

The combination of increased numbers of fleet boats, the use of wolf pack tactics, and working torpedoes accomplished wonders in merchant ship sinkings in 1944. In 1942, for example, the subs had sunk only 608,536 tons of Japanese shipping. This figure was slightly more than doubled by US submarines in 1943.

However, in 1944 the Japanese merchant fleet lost 2,383,431 tons of shipping to the submarines. As the result of these staggering losses, by the start of 1945 Japan retained only 40 per cent of the shipping tonnage with which she had begun the war; even after the additions to the fleet made by wartime construction, ship salvage, and captures. The US submarine war truly was strangling Japan’s economic and military lifelines to the remnants of her overseas empire. In 1940, the last year before the eruption of the Pacific war, Japan had imported some 67 million tons of raw materials for use in her industrial economy. During the last full year of the war, though, her imports were down to barely 27 million tons. The import tonnage decreased even more severely in the war’s final months, as the shipping available for carrying raw materials was swept from the seas.

In the spring of 1945, with the Pacific virtually cleared of Japanese shipping by the effects of US and Allied submarine and air attacks, only one important area still remained where Japanese merchant ships traveled largely unmolested – the Sea of Japan. A few US submarines had penetrated the Sea of Japan in the summer of 1943, but the patrols were quickly discontinued because of the dangers posed to the submarines by Japanese minefields laid in all the entrances to the sea. With other shipping targets almost nonexistent, ComSubPac decided to train subs to underrun anchored minefields. After a series of exercises, in June 1945 nine fleet boats equipped with FM sonar for mine detecting, organized into three wolf packs, simultaneously passed through the minefields laid in the Tsushima Strait and entered the Sea of Japan. In 17 days of patrolling there, the subs accounted for 28 ships and 16 smaller craft. They then assembled south of La Perouse Strait (minus Bonefish which had been sunk) and made a successful night surface escape in column through La Perouse (which lies between Sakhalin and Hokkaido) This marked the last major submarine offensive of the war. The isolation of the Japanese Home Islands from the empire’s supporting territories was almost complete.

By the war’s end in August 1945, the US submarine force in the Pacific had compiled an enviable record of success against Japan’s merchant fleet. At the time of her surrender, Japan’s merchant tonnage stood at only 1,500,000 tons – less than a quarter of the total with which she had started the war – and half of this remainder was unusable due to damage. In some 42 months of fighting, US submarines had destroyed 54.6 per cent of all Japanese merchant vessels lost during the war – 1,113 ships, totalling 4,779,902 tons – at a total cost of 49 submarines lost. In large measure, the United States submarine offensives had brought the Japanese war machine virtually to a halt.
Posted by Mitch Williamson at Sunday, July 26, 2015
Email ThisBlogThis!Share to TwitterShare to FacebookShare to Pinterest
Labels: History, Operations
Newer Post Older Post Home