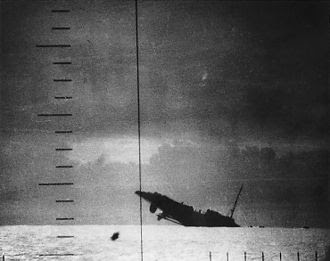 In the years after World War I, United States Navy planners refined Plan Orange, the war plan designed to be employed in the event of a conflict between the United States and the Japanese Empire. An Orange war was expected to be “[an] offensive war, primarily naval, directed toward the isolation and harassment of Japan, through control of her vital sea communications and through offensive sea and air operations against her naval forces and economic life.” As the planners learned more about Japan’s own plans for fighting and defeating a superior US Navy, through the service’s radio monitoring of Japanese fleet exercises and its deciphering of Japanese naval codes, Orange Plan was revised to reflect these changing realities. The results of these changes were then tested during the war games which were being regularly played at the Naval War College in Newport, Rhode Island.

The Navy viewed the mission of its submarine force as being to support the operations of the fleet. The main tasks for the submarine force, therefore, were intelligence-gathering – observing the harbors of the Mandated Islands – operations against the hostile main body, and assisting in the defense of America’s principal Pacific bases in Hawaii and the Philippines, as well as protecting the approaches to the Pacific side of the Panama Canal. Surprisingly, since its war plan envisaged the eventual isolation of the Japanese Home Islands, until late 1941 the US Navy did not contemplate the early use of its submarines for major attacks against Japanese commerce. One of the reasons for this omission, however, was the effect of international law. At the London Naval Conference in 1930, Britain, the United States, and Japan had signed a final agreement which contained an article outlawing the use of unrestricted submarine warfare. Under Article 22 of the 1930 London Naval Treaty, submarines were obliged to conform to the same rules of international law as surface ships when it came to actions against merchant vessels. Submarines were forbidden to sink a merchant ship without having first placed its passengers, ship’s crew, and papers in a “place of safety.” This restriction promised to limit severely the value of a sustained submarine campaign against enemy commerce, since, among other things, it obliged the submarine to expose itself to possible attack by remaining on the surface for a considerable period of time, awaiting the transfer of the intended victim’s personnel to the lifeboats or, indeed, taking them on board for delivery to a place of safety.

Top-level Navy thinking began to change on the issue of unrestricted submarine warfare in early 1941, following the submission of a study by the Naval War College which advocated the establishment of “war zones” within which enemy merchant vessels could be sunk on sight. Although this proposal was not accepted at that time, in May 1941 the Navy approved War Plan Rainbow 5, which authorized the theater commanders to declare “strategical areas” from which merchant ships would have to be excluded, thus incorporating the essential feature of the earlier proposal. In late November 1941, the Chief of Naval Operations, Adm. Harold R. Stark, drafted a cable giving the Commander in Chief of the Asiatic Fleet authorization in the event of a formal war between the United States and Japan to conduct unrestricted submarine and aerial warfare in a specifically designated Far Eastern strategical area.

In December 1941, the United States Navy had 51 submarines based in the Pacific. These boats were of two basic types – fleet submarines and S Class submarines. The fleet submarines, most dating from the mid-1930s and after, were of a number of different classes, ranging in size of from 271 to 381 feet (83 to 116m) in length and up to 2,730 tons in surface displacement. With most of them having a wartime fuel capacity in excess of 90,000 gallons (341,000l), the fleet boats were capable of patrolling 10,000 nautical miles (18,500km) at normal cruising speed, without refueling. The older S Class submarines, designed primarily for a defensive role and first introduced into the fleet in the early 1920s, were 231 feet (70m) in length and up to 950 tons in surface displacement. They lacked air conditioning, which made submerged patrolling in tropical waters arduous for their crews, because temperatures inside the boats could climb to 110 degrees Fahrenheit (45°C). In addition, because the fuel capacity of the S Class submarines was far smaller – less than a third of that of the newer fleet boats – their cruising range was shorter.

At the time of the Japanese attack on Pearl Harbor, 29 of the available US submarines in the Pacific Ocean – 23 fleet boats and six S Class boats – were based in the Philippines. The other 22–16 fleet subs and six of the S Class – were based at Pearl Harbor. On the morning of the attack, however, there were only four submarines in Pearl Harbor, together with the submarine tender Pelias. To the attacking Japanese aircraft, the submarines were not high priority targets, and, as a result, none of them suffered significant damage in the Japanese air raids. Five more Pearl Harbor-based subs were operating in nearby waters that morning and were unaffected by the main attacks. The submarines berthed at Cavite Naval Station in the Philippines were less lucky than their Hawaiian counterparts. When the base was attacked by high-altitude Japanese bombers on December 10, the fleet boat Sealion was wrecked beyond repair and had to be scuttled, and her sister Seadragon was seriously damaged.

In the aftermath of the aerial destruction at Pearl Harbor, which left all the battleships of the Pacific Fleet sunk or seriously damaged, the submarines at Pearl Harbor and Cavite constituted one of the few offensive forces left in the Pacific to slow down the Japanese onslaught. They were rapidly put to use. Within six hours of the Japanese attack at Pearl Harbor, well before the extent of the damage had even begun to be known, dispatch orders from the Chief of Naval Operations to the affected commanders directed “Execute unrestricted air and submarine warfare against Japan.” The first of the Hawaiian-based subs left on a war patrol on December 11, 1941. Others followed over the next two weeks. In all, four headed for operations around the Marshall Islands, and three more left for petrols in the waters off the Japanese Home Islands. Four other submarines from Pearl Harbor were already operating off Midway Island and Wake Island. The Cavite-based subs were also at sea, preparing unsuccessfully to defend the island of Luzon against invasion. By December 11, 22 of the surviving 28 in the Philippines were operating in waters to the east, west, and south of Luzon.

At the outbreak of the war, the Japanese merchant marine was a choice target for attack. Because of a lack of adequate natural resources, Japan had to import more than two-thirds of her basic requirements of iron ore, petroleum, lead, tin, and manganese and all of her required nickel, wool, and raw cotton. Each of the commodities arrived by ship. To meet her immense transportation needs, Japan had some 6,400,000 tons of merchant shipping in December 1941. Although prewar estimates had set a minimum requirement of three million tons of shipping needed to keep Japan’s civilian economy going, initial wartime requirements for the Japanese Imperial Army and Navy forced the drafting of nearly four million tons of shipping for military purposes. This left barely two-and-a-half million tons available to fulfil Japan’s domestic economic needs.

From March 1942, the US submarines operated under one of two commands: Commander Submarine Force, Pacific Fleet, headed (after January 1943) by Vice Adm. Charles A. Lockwood at Pearl Harbor, and Commander Submarines, Southwest Pacific (later Commander Submarines, Seventh Fleet), headed for much of the war by Rear Adm. Ralph W. Christie, at Perth-Fremantle, Australia. The Pearl Harbor-based submarines operated in the East China Sea and Empire waters close to the Japanese Home Islands and off the Marshall, Marianas, Palau, and Caroline Islands, with the Japanese fleet base at Truk a target of particular interest. Hunting grounds for the Perth-based submarines included the South China Sea, the Celebes Sea, and the Java Sea. Among the individual target areas were Cam Ranh Bay and the waters off Manila, Davao (in the Philippines), and Surabaya (in Java). Until the arrival of many additional submarines, however, there were simply too many areas for the available boats to cover. As a result, the deployed submarines were spread thin during all of 1942 and much of 1943.

US submarines were slow to take advantage of the promise offered by Japan’s merchant shipping in the first months of the Pacific War. For example, during the first three months of fighting, the subs sank only 13 Japanese merchant vessels. There were several important reasons for this slowness. One was the conservative tactics used during the early patrolling. Based on their pre-war training, submarine commanders were overly cautious in their attacks on shipping targets – diving too quickly on the basis of contacts and relying on submerged attacks at night rather than attacks on the surface. Moreover, since the submarines operated singly, there was no chance to practice team tactics to overcome resistance from Japanese escort vessels. With the experience gained from their first few wartime patrols, though, most submarine skippers learned to become more aggressive in attacking convoys, and the sinking failures attributable to over-cautious tactics declined sharply.
Posted by Mitch Williamson at Sunday, July 26, 2015
Email ThisBlogThis!Share to TwitterShare to FacebookShare to Pinterest
Labels: History, Operations
Newer Post Older Post Home