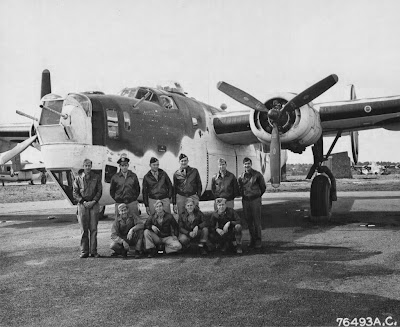 
Perhaps one of the least known but significant roles of the Army Air Forces (AAF) was in antisubmarine warfare, particularly in the European-African-Middle Eastern theater. From the coasts of Greenland, Europe, and Africa to the mid-Atlantic, AAF aircraft hunted German U-boats that sank thousands of British and American transport ships early in the war. These missions supplemented the efforts of the Royal Navy, the Royal Air Force Coastal Command, and the U.S. Navy, and helped those sea forces to wrest control of the sea lanes from German submarines.

Reacting to the ferocity of the U-boat offensive in 1942, the AAF developed and adopted tactics that exploited the submarine’s need to surface frequently. A submarine emerged daily, usually at night, to recharge its batteries, ventilate the boat, and permit crew members to come topside. It often travelled or pursued convoys on the surface because its submerged speed averaged three knots (nautical miles per hour), whereas its surface speed was about fifteen knots, much faster than the ten knots of most merchant ships. Furthermore, submarines remained on the surface to manoeuvre for attacks and usually to fire their torpedoes or guns before submerging. When Allied escort ships discontinued their search for the submerged U-boats, the Germans could emerge again and circle ahead of the convoy to make another attack. Aerial patrols prevented this manoeuvre by forcing submarines to dive frequently and remain submerged too long to catch up with the convoys.

By June 1942, the AAF was conducting two broad types of antisubmarine patrols. At the request of the U.S. Navy, AAF crews often escorted Allied convoys to prevent enemy submarines from attacking ships at close range. However, the AAF preferred to take the offensive by flying routine aerial patrols. Searching coastal waters and areas stretching one hundred miles out to sea required precise navigation, reliable communications, and sudden attacks to surprise U-boats travelling on the surface.

Regardless of the type of patrol, aircrews normally flew hundreds of hours without sighting a submarine. Boredom could not be allowed to dull the crew’s reflexes because a successful attack had to take place no more than fifteen to thirty-five seconds after a submarine submerged. Surprise was crucial in sinking or heavily damaging a submarine. Once a target was spotted visually or by radar, the pilot achieved surprise by flying in clouds, with the sun behind the aircraft. Attacking at an angle of 15 to 45 degrees increased the chances of a hit or near-miss. The pilot would fly as low as possible, preferably about fifty feet above the water, and would ideally drop the depth bomb within twenty feet of the submarine’s pressure hull. The aircrew dropped depth bombs in clusters of six spaces, to fall at fifty- to seventy-foot intervals. As the aircraft passed over, the crew would also fire their machine guns in an effort to damage the submarine and suppress antiaircraft fire.

A specially equipped four-engine Consolidated Vultee B–24 Liberator was the AAF’s best answer to the submarine threat, particularly in the European-African-Middle Eastern (EAME) theater. The B–24 entered the conflict in the winter of 1942. When the U.S. Navy deployed its escort carriers in mid- to late-1943, the Liberator provided the most effective means for locating and attacking U-boats operating more than four hundred miles offshore. The U.S. Navy and the Royal Air Force (RAF) Coastal Command also flew the antisubmarine plane.

Carrying up to 2,500 gallons of fuel, the modified B–24 had an impressive range—about three hours of patrol time after flying a thousand miles from its base. A mission could last sixteen hours, although the average was ten to twelve hours. The Liberator flew day and night, except in bad weather. The heart of the antisubmarine B–24’s capabilities was its microwave radar equipment, known as Airborne Surface Vessel Detection ten millimeter (ASV–10) radar. A skillful operator could identify a surfaced submarine at more than forty miles and the conning tower at fifteen to twenty miles. Other special equipment included the absolute altimeter, the magnetic anomaly detector (MAD), and the long-range aid to navigation (LORAN).

The absolute altimeter used a modified microwave radar to determine an aircraft’s altitude within ten feet. It replaced the much less exact barometric instrument and permitted aircraft to fly safely as low as fifty feet when attacking submarines. Lower-altitude attacks substantially improved the chances of destroying the target.

The magnetic anomaly detector located any change in the magnetic field of the earth created by a large metal object such as a submarine. MAD-equipped aircraft patrolled areas where submarines had been spotted but had submerged. Crews often combined MAD with a radio sonobuoy, a technique designed to detect the sounds of a submerged submarine. Thus, MAD permitted an intensive air search with a high probability of success.

Aircraft equipped with LORAN received radio signals from three known points, thus allowing navigators to pinpoint their locations within four miles at a range of 1,200 to 1,500 miles from the transmitters. LORAN permitted efficient control of forces converging on submarines for intensive attacks. It also allowed a navigator to guide patrolling aircraft to the most likely location of a surfaced submarine, as determined from intelligence information.

The modified B–24 carried six 500-pound depth bombs; four 20-mm, forward-firing cannons; and six .50-caliber machine guns. In the fall of 1943, several B–24s were fitted with a chin turret housing four more machine guns for increased forward firepower. Depth bombs had shallow fuse settings, and when dropped on a submerging submarine, their blunt shape caused them to sink slowly and explode at a depth of about twenty-five feet. Vessels equipped with adjustable depth charges attacked U-boats immersed at greater depths.

Reorganization of the AAF’s antisubmarine forces was the final strategy designed in response to the specialized demands of the U-boat threat. Serious disagreements had arisen between the U.S. Navy and the AAF over antisubmarine tactics and the control of AAF forces in U.S. waters. To resolve these conflicts and improve the control and training of AAF antisubmarine forces, Arnold decided to centralize the forces under one organization. On October 15, 1942, the AAF established its Antisubmarine Command under Brig. Gen. Westside T. Larson. The I Bomber Command had been the AAF’s primary antisubmarine unit since the beginning of the war, so it provided most of the personnel, aircraft, and equipment for the new command. The new organization introduced unity of command for antisubmarine forces within the War Department. Training, administration, and maintenance also grew more flexible and effective. Although the AAF’s antisubmarine groups and squadrons continued under the operational control of the U.S. Navy, they benefited from the reorganization as well.

By the time the AAF disbanded its Antisubmarine Command in August 1943, the German submarine threat had been reduced to little more than a nuisance. In the Atlantic Ocean between September 1943 and the end of the war, German submarines sank fewer than twenty ships. Although attacks became increasingly rare, the U-boats did tie down large numbers of Allied naval and air forces.

Statistics underscore the menace of the enemy submarine offensive. Germany began 1942 with 91 operational submarines; by 1943, it had reached a peak strength of 212. It built 1,162 submarines, of which 785 were sunk, 156 surrendered at the end of the war, and the rest were scuttled or otherwise destroyed. Despite these astounding losses, the U-boats sank over 2,600 Allied ships, totalling about fifteen million tons of cargo. Between September 1939 and May 1945, German submarines operated over an extremely large area: in the North and South Atlantic Oceans, Caribbean Sea, Gulf of St. Lawrence, Mediterranean Sea, Indian Ocean, Kola Inlet in north Russia; off the east coast of the United States; around the Cape of Good Hope; and along the coasts of Australia and Brazil.

The critical battle of the antisubmarine war took place in the North Atlantic between August 1942 and May 1943, when German submarines sought to drive Allied shipping from the transatlantic sea lanes. In August 1942, the submarines were sinking more merchant ships than the Allies could replace, but by May 1943 the U-boats were sinking too few ships to justify their own losses from antisubmarine forces. Thereafter, the German submarines dispersed to scattered patrol areas.

AAF units from the EAME theater participating in the critical Battle of the Atlantic comprised two independent flights operating from Greenland. Elsewhere in the theater, AAF antisubmarine units concentrated on patrolling the key routes at the Bay of Biscay and protecting Allied shipping approaching the Straits of Gibraltar. Despite these important missions, at no time did the number of AAF antisubmarine units active in the EAME theater ever exceed six squadrons.

With their advanced technology and long-range capabilities, AAF forces helped tip the balance of the war against the U-boats in favor of the Allies. Although AAF B–24s destroyed only eight submarines, their extended patrols forced U-boats to submerge and remain ineffective for prolonged periods, allowing essential Allied shipping to escape attack. The key measure of success in antisubmarine warfare is the number of ships not sunk, rather than the number of submarines destroyed. After the war, Dönitz cited the Allies’ use of aerial reconnaissance and attack as decisive factors in the defeat of the German submarines.

On the other hand, strategic bombing proved less effective against German submarine production or basing than Allied leaders expected in 1942. The bombing attacks on production facilities resulted in some destruction, but until February 1944 the Germans managed to compensate for the damage done. The number of U-boats commissioned reached its peak of seventy-eight per quarter in January 1944 and did not decline below forty-nine per quarter until April 1945. The bombers were also unable to destroy U-boats berthed at their bases until the defeat of the submarines in the deep ocean and the capture of the protected submarine facilities on the French coast. Forced to shelter immobile in unprotected harbors along the Baltic, Mediterranean, and North Seas, the U-boats eventually became easy prey to U.S. strategic bombers, and the threat to Allied shipping and troop movements ended.
Posted by Mitch Williamson at Thursday, May 14, 2015
Email ThisBlogThis!Share to TwitterShare to FacebookShare to Pinterest
Labels: Aircraft ASW, History
Newer Post Older Post Home