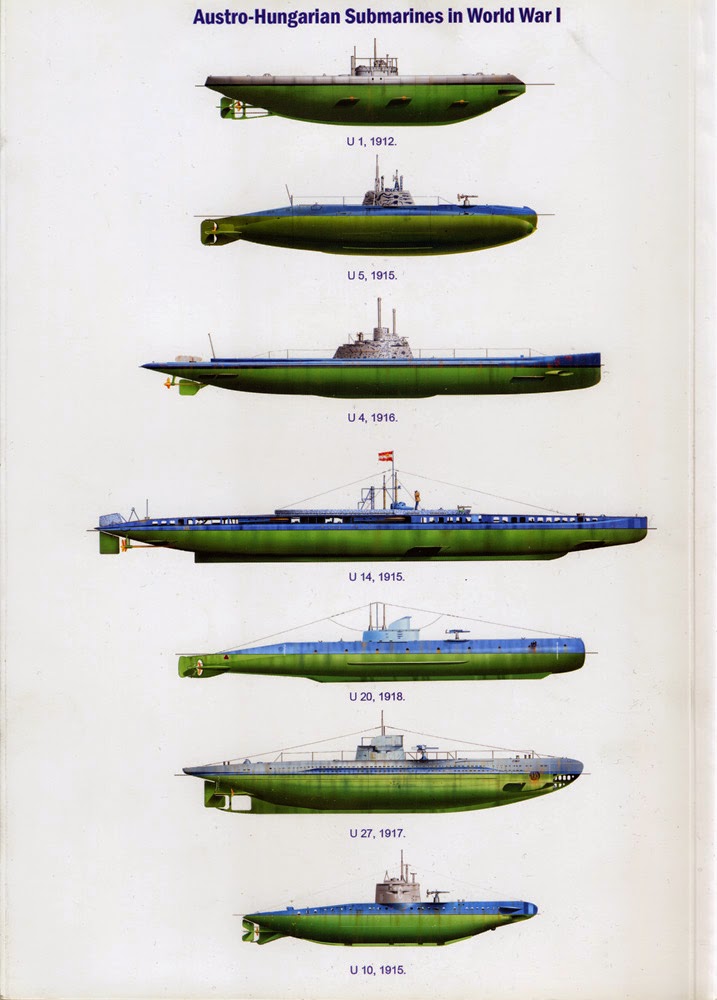 The Austro- Hungarian navy was comparatively late in ordering submarines, their first not being launched until 1908. Initially they were known simply by a number in Roman style, and later the U designator was added but by the middle of the war the roman numerals had given way to Arabic ones, thus duplicating the numbers of some of the German boats.

At the outbreak of war the Austrian sub- marine fleet consisted of seven boats. Of these the first six belonged to three different types each pair being built at either Fiume or Pola. I-IV were badly over-engined ­and suffered from excessive vibration when running at high speed on the surface with their Korting paraffin engines. They were all fitted with three 45-cm (17.7-in) torpedo tubes. As commander of V Kapitanleutenant von Trapp was responsible for sinking the French ­armoured cruiser Leon Gambetta in the Strait of Otranto on April 27, 1915, with two torpedoes fired during a daring and skilful night attack.

In 1914 an order for the next five subm­arines (VII-XI) was awarded to the Germania Yard at Kiel. They were to helve been larger diesel-engine boats armed with five 50- cm (19.7-in) torpedo tubes, but they were taken over by the Germans and eventually commissioned as U 66-70.

Thus the seventh boat of the Austrian navy at the outbreak of war was XII, built originally as a private venture by Whithead's at Fiume, and added to the Austrian navy in late 1914. She was sunk off Venice on August 11, 1915, and later salvaged by the Italians. No submarine was numbered XIII, but XIV was the French submarine Curie which became caught in the nets off POLA in December 1914  refitted ­and entered into the navy and given to command by von Trapp.

By early 1915 the Germans held developed the small Type UB coastal submarines and Type UC small minelayer which could be built rapidly ­and if necessary, transported by rail in section for assembly elsewhere. Some of the UB-Boats were taken to Pola for assembly ­and initially manned by their German crews. In June 1915 they began to be formally handed over to the Austrians, UB 1 becoming X and UB 15 as XI. Later in the year three of the Type UC became XV, XVI and XVII. XVIII was the Italian Giacinto Pullino which was captured in August 1916, refitted and entered into the Austrian navy.

XIX-XXIII were five boats completed in Austrian dockyards in 1917 and were generally similar to the Danish Havmanden Class. XXIV-XXVIII were completed in 1918. From time to time other boats were transformed or loaned from the Germans, mostly the Types VB or UC, and in 1916 VB 43 became the XLIII. In some cases the flag change m­ay have been nominal with the original German crew staying with the boat, which later reverted to the Germany. This may in part have been due to the complication that until August 1916 Italy was at war with Austria-Hungary but not with Germany. With transfer of flag the boats were given Austrian numbers with, among others VB 48 becoming LXXIX ­and VB 105 becoming XCVII.

During the war the Austrians lost seven ­submarines, including both III and VI of the prewar boat­s. Two more were badly dam­aged. 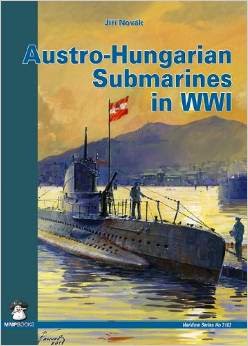