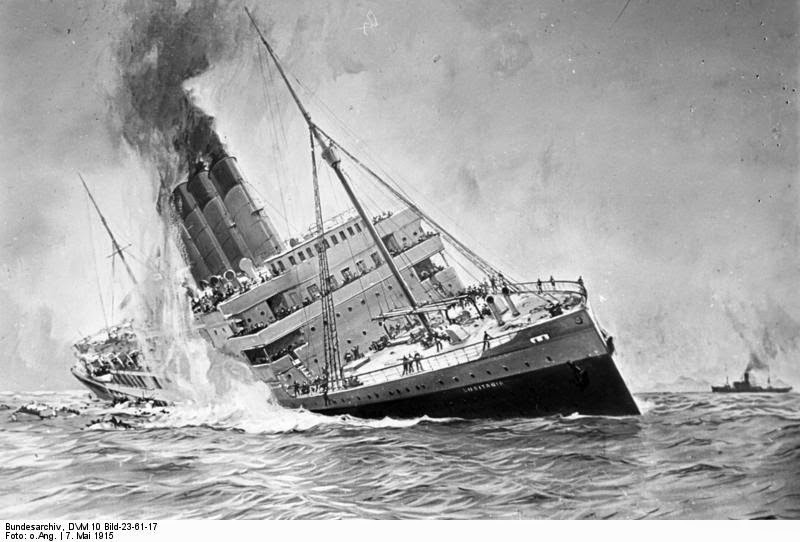 1915 painting depicting the sinking of Lusitania by the U-20.

The German Army's conquest of a large part of Belgium gave a vital fillip to the U-boat war. When the front stabilised after the Battle of the Marne in August 1914, the German right flank rested on the Flanders coast at Nieuport. The Navy soon established a base complex at Ostend, with submarines and light surface forces based there and at Zeebrugge. U-boats were based at the inland port of Bruges and reached the open sea by canals to Ostend and Zeebrugge, allowing them to spend more time at sea in the Western Approaches and the Bristol and St George's Channels. British minefields and net barriers in the Dover Straits were not effective as U-boats soon learned to make the passage on the surface at night. To allow the British to continue believing in the efficacy of their Dover Straits anti-submarine barriers, U-boats based in Germany would 'show themselves' occasionally to Royal Navy patrols.

The Allies' answer to the unrestricted campaign was to increase the number of patrol vessels by impressing every available warship and hired commercial craft. A new type of utility warship, the 'Flower' class sloop, was taken off minesweeping duties and used instead to hunt for submarines. The Auxiliary Patrol was formed out of the large number of steam yachts, trawlers and drifters which were no longer performing any useful function. Armed with light guns, the patrol was sent on fruitless hunts for U-boats around the British Isles. In fact the sea is so large that the U-boats merely had to wait near a busy shipping route until an unescorted vessel came along. If a patrol vessel appeared it was usually possible to submerge without being sighted.

THE LUSITANIA
Nothing illustrates the ease with which U-boats could sink shipping than the tragedy of the liner Lusitania. Most British transatlantic liners had been taken over in 1914 for conversion to armed merchant cruisers or troopships, but with government approval the Lusitania was permitted to resume a limited passenger service between Liverpool and New York. The reasons for this were subtle and complex. First, the giant liner was a visible reassurance to the American public that it was still 'business as usual', and that Britain's position as Mistress of the Seas was not under serious threat. Second, the Germans had put up an ingenious answer to the British blockade, claiming that their U-boats had instituted a counter-blockade of the British Isles. If this claim had been upheld in an international tribunal the Germans would have been within their rights to sink any ship trying to reach the British Isles. However, to be upheld it would have to be proven to be 'effective', and by maintaining a scheduled service to and from New York the British Government was quietly keeping its options open. There was also still some hope that the Germans would never dare to sink a large passenger ship, for fear of alienating the US Government.

Much has been made of the fact that the Lusitania was carrying explosives, and indeed her manifest reveals that she was carrying 37.59 tonnes (37 tons) of small-arms ammunition and fuse nosecaps. It has even been claimed that she was armed, despite the lack of any evidence to show that she underwent conversion to an armed merchant cruiser. True, she had been taken up in August 1914 for that purpose, but she had proved such a glutton for coal that she was struck off the list a month later and returned to her owners. No other auxiliary cruiser carried passengers as well as a cruiser-armament, for the simple reason that the passenger accommodation was needed for conversion to naval use, and the unpredictable movements of a liner under naval control would have taken bookings down to zero very quickly. Nor did passengers and explosives mix; the passenger accommodation was a potential firetrap, and a liner had too little cargo space to make such a conversion worthwhile. The 37.59 tonnes (37 tons) of rifle ammunition and fuses formed the most inert type of munitions, almost impossible to detonate by a distant explosion. Whatever anyone thought, or knew, the Lusitania was carrying when she lay in New York is irrelevant, because the information about her future position could not be relayed to any U-boat on the other side of the Atlantic. When in due course the Lusitania was torpedoed by U.20 off the Old Head of Kinsale on 7 May 1915, it suited both sides to claim that the sinking was planned. The Germans claimed that as they knew about the small cargo of munitions, U.20 was entitled to sink her, while the British claimed it was a Hun plot to sink innocent ships. The truth is that K/Lt Schwieger's log shows beyond doubt that his encounter with the Lusitania was unplanned. He chose to patrol off the Old Head of Kinsale because it was a convenient landfall for ships arriving in British waters. When he saw the four funnels belching coal smoke he thought he was looking at a flotilla of destroyers in line ahead, and only when the target turned did he see she was a liner. As his orders stated that a number of troopships were expected from Canada, he made the reasonable assumption that this was a legitimate target. Any idea that he could have counted positions of guns is ridiculous, and recent photographs of the wreck show no guns. The ship's rapid sinking after what was reported by Schwieger as a second explosion is explained by modern chemists as a probable spontaneous combustion of air and coal dust - a phenomenon only vaguely understood in 1915.

Among the dead were 159 Americans, and this time the US Government's protests were stronger than before. A Note from Washington to Berlin demanded that U-boats must refrain from attacking passenger ships. The Germans did not handle the diplomacy well, maintaining that they had warned potential passengers of the danger. This merely fuelled suspicions that the ship had been torpedoed deliberately. The British did nothing to damp down these rumours, although if anyone had thought the 'conspiracy theory' through they would have concluded that German agents must be in control of the Cunard Steamship Company or even in command of the ship, if such a perfect interception was to be achieved.
Posted by Mitch Williamson at Friday, March 06, 2015
Email ThisBlogThis!Share to TwitterShare to FacebookShare to Pinterest
Labels: History
Newer Post Older Post Home