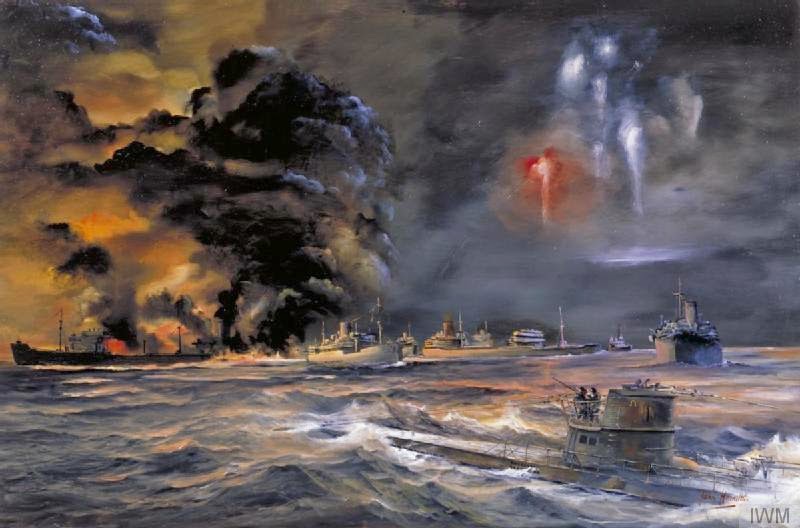 The Canadian warships were by this time encountering a new form of submarine warfare. As the British navy gathered more and more merchant ships into convoys, including a new series, SC, for old, slow ships that sailed from Sydney, Nova Scotia, the Germans were forced to find a way to locate and attack convoys. The successful German response was 'wolfpacks' tactics. More submarines were becoming available from German shipyards, and with these it was becoming possible to set up long patrol lines, with submarines stationed twenty-five or thirty Ian apart - visibility distance - across the ocean approaches to the British Isles. When one of the submarines sighted a convoy, it radioed submarine headquarters in France, which directed all the other submarines in the patrol line to close in on the convoy. During the Second World War submarines were much more effective on the surface than when submerged. On the surface, the submarine's diesel engines drove them at eighteen or nineteen knots, and they were able to manoeuvre quickly to fire torpedoes at three or four ships; when submerged, and reliant upon battery-driven electric engines, the submarines could only move at a walking pace, not fast enough to pursue targets after firing a single group of torpedoes. Therefore, when chasing a convoy, the submarines kept over the horizon, beyond visibility distance from the naval escorts, and then, after night fall, came in fast, on the surface. The submariners could easily make out the shadows of the big merchant ships, but the lookouts on the merchant ships and naval escorts could see nothing of the low submarine hulls.

In several of the early 'wolfpack' attacks on convoys, the German submarine patrol lines succeeded in locating the convoys six hundred or more Ian at sea, outside the zone where the destroyers joined to provide antisubmarine protection. In only one month between June 1940 and May 1941 were the losses of Allied merchant vessels less than 30; total losses for the period were some 540 ships. This spelled disaster for Britain which, cut off from supplies from continental Europe, was now almost completely dependent upon the goods carried from Canadian ports in merchant ships. If the Royal Navy could not more effectively protect merchant shipping, there would be no need for the German army in France to attempt to invade the British Isles: the British population would begin to starve. The only answer was to provide anti-submarine protection to convoys all across the Atlantic.