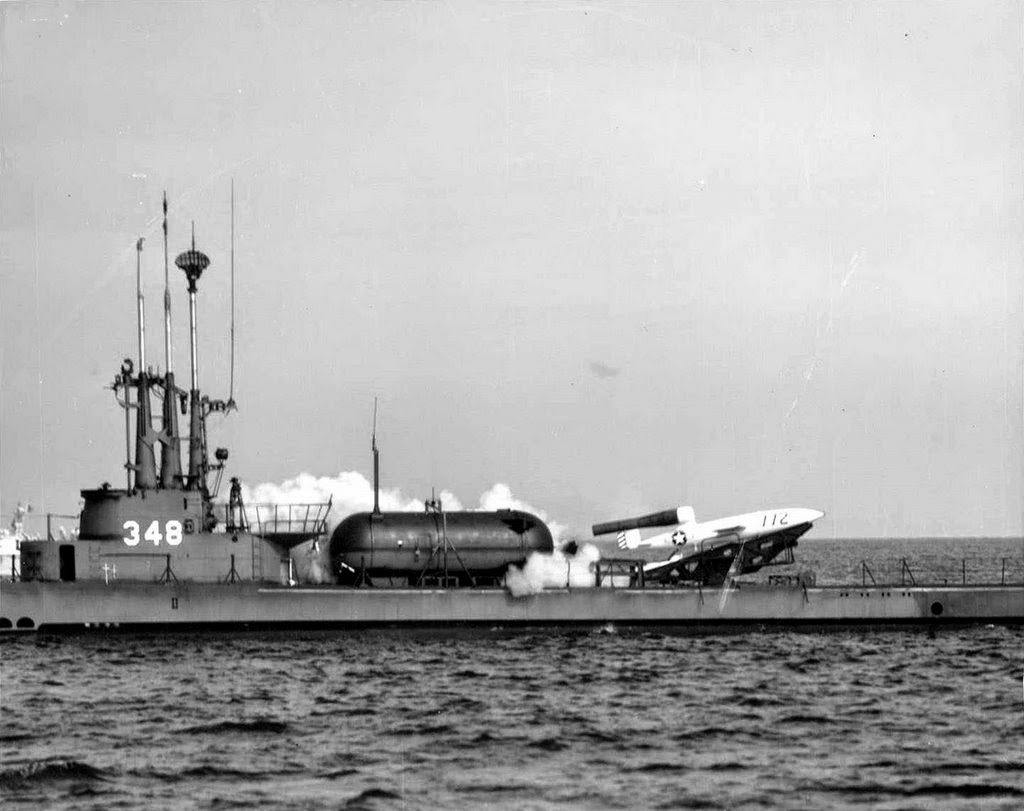 USS Cusk (SS-348) was the first submarine of the United States Navy (and perhaps the world) to fire a guided missile.

And it's due in part to the work of German scientists.

What those German scientists started with their rocket programs! Today there are ballistic missiles (submarine and land launched) , cruise missiles, and so on.

Once, however, there were the German rockets and a race to develop delivery systems for American and Soviet adaptations of a "proven" technology.


Both sides were also quick to take advantage of captured German V-1 and V-2 technology from World War II to begin development of both guided and ballistic missiles for tactical and strategic use, with the U.S. Army initially taking the lead in the United States. Not to be out-done, the U.S. Navy converted two World War II fleet boats, USS Carbonero (SS-337) and USS Cusk (SS-348) to carry a U.S. variant of the German V-1 pulse-jet missile, known as the Loon, first launched at sea in February 1947. Loon's nominal range under command guidance was approximately 50 nautical miles, but using a second submarine as a relay, it could be effective out to 135 nautical miles, with a reported Circular Error Probable (CEP) of 6,000 yards.

Nothing had come of a German plan to tow submersible rafts across the Atlantic to bombard the United States with V-2 rockets, but the US Navy was determined to match the awesome power of long-range missiles to the submarine. In 1947, a submarine fired the first surface-to-surface cruise missile, the KUW-1 Loon (later renumbered LTV-N-2). This improved version of the German V-1 'doodlebug' was carried in a large watertight cylindrical canister on deck, and launched from a collapsible ramp by a rocket booster. It was assembled on deck and then 'flown' by radio commands, either from the parent submarine or from another boat. The culmination of the programme was the conversion of two 'Gato' class, the Carbonero and Cusk in 1946, the first firing being made by the Cusk off Point Mugu on the Californian coast. Even more impressive was a test firing in 1950, when the Cusk fired her Loon, submerged and tracked the missile for 194.46km (105 miles), using AN/BPQ-2 guidance equipment.

It was the birth of the submarine-launched cruise missile. An improved Loon, the SSM-N-8A Regulus, made its maiden flight in 1950. The first Regulus-armed submarine, the USS Tunny, was commissioned in March 1953, and she and the Barbero could accommodate two missiles in a deck hangar. Regulus was a strategic weapon, and the five boats armed with the system were assigned to the Pacific Fleet to counter any threat from mainland China. An improved Regulus II was fired from the USS Grayback in 1958, but when the programme was cancelled that year she and her sister Growler and the nuclear boat Halibut were armed with Regulus I instead. The money saved was diverted to a much more powerful system, the Polaris submarine-launched ballistic missile (SLBM). Although supporters of the Regulus system scoffed at the risk of remaining on the surface to launch it, the submariners would be happier with a system launched from below the surface.
Posted by Mitch Williamson at Friday, March 06, 2015
Email ThisBlogThis!Share to TwitterShare to FacebookShare to Pinterest
Labels: Technical
Newer Post Older Post Home