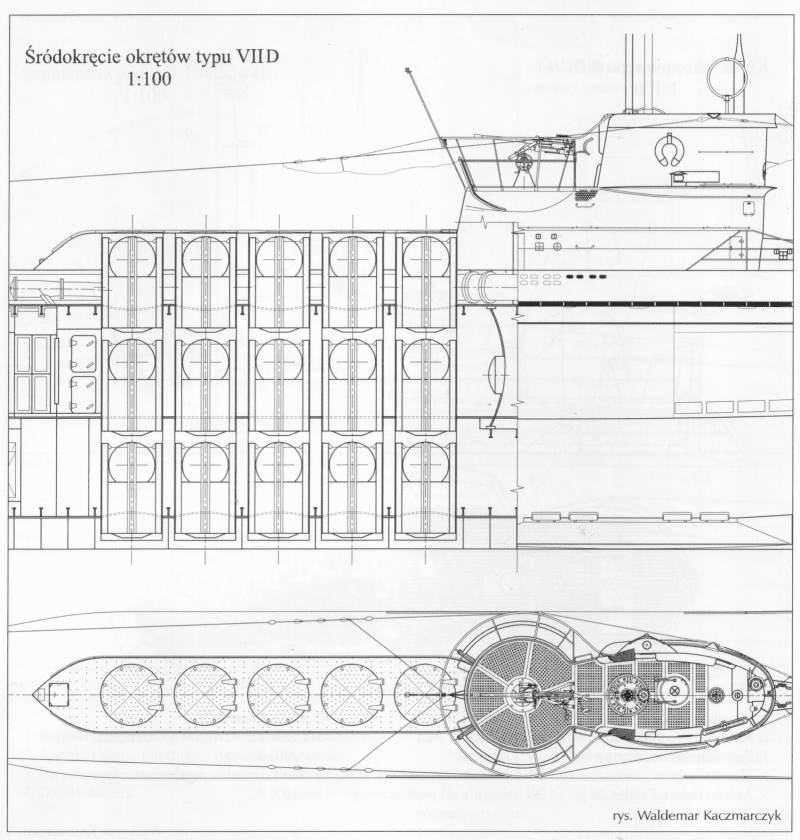 One of the most successful weapons in naval warfare was the mine.  While the smaller U-boars could deliver mines through their torpedo tubes, only the XB U-boats, which were specifically designed as minelayers, could deliver the SMA cable anchored mines. The XBs were large and unwieldy, and could only be used as minelayers since their only other armament was two stern-mounted torpedo tubes.  Because of this, only eight XBs were built and commissioned.

However, the SMA was the best type of mine, so the Oberkommando der Kriegsmarine directed that the Type VIIC U-boat be modified to enable it to deliver SMA mines while maintaining the full offensive capabilities of the Type VIIC. The result was the Type VIID, designed to lay SMA type mines in British coastal waters. Using the basic Type VIIC, a new hull section was inserted aft of the control room, containing five vertical mine launchers which could each carry three SMA mines, which increased overall length from 217 to 250 feet. The saddle tanks were also lengthened, which provided a larger load of diesel fuel, giving the Type VIID greater range than the Type VIIC.  However, due to its increased size and weight, the Type VIID had marginally poorer maneuverability, and a slower top speed and diving time. Six Type VIIDs - U-213 to U-218 - were built by the Germania Shipyard in Kiel and commissioned between August 1941 and January 1942.

EMS Mines
EINHEITSMINE SEHROHR-TREIBMINE (EMS) The Einheitsmine Sehrohr-Treibmine (= standard mine/drifting) was a tube-launched mine which entered service in late 1943. It was designed to float on the surface, moving with the current, and to explode on contact with a target. It became active 10 minutes after launching and sank automatically 72 hours later. It carried 3l lbs (14kg) of explosive.

MINETORPEDO-A (MTA) The Minetorpedo-A was developed to replace the TMA and was, in essence, a torpedo with a mine warhead, which was intended to overcome the problem of the vulnerability of U-boats when laying ground mines in shallow waters. A standoff weapon, the MTA could be programmed to run to any distance up to a maximum of 7,655yd (7,000m) in 220yd (200m) increments. On arriving at the set distance, the motor switched off and the torpedo sank to the bottom where it acted as a ground mine. It had to be used in water less than 66ft (20m) deep for maximum effect.