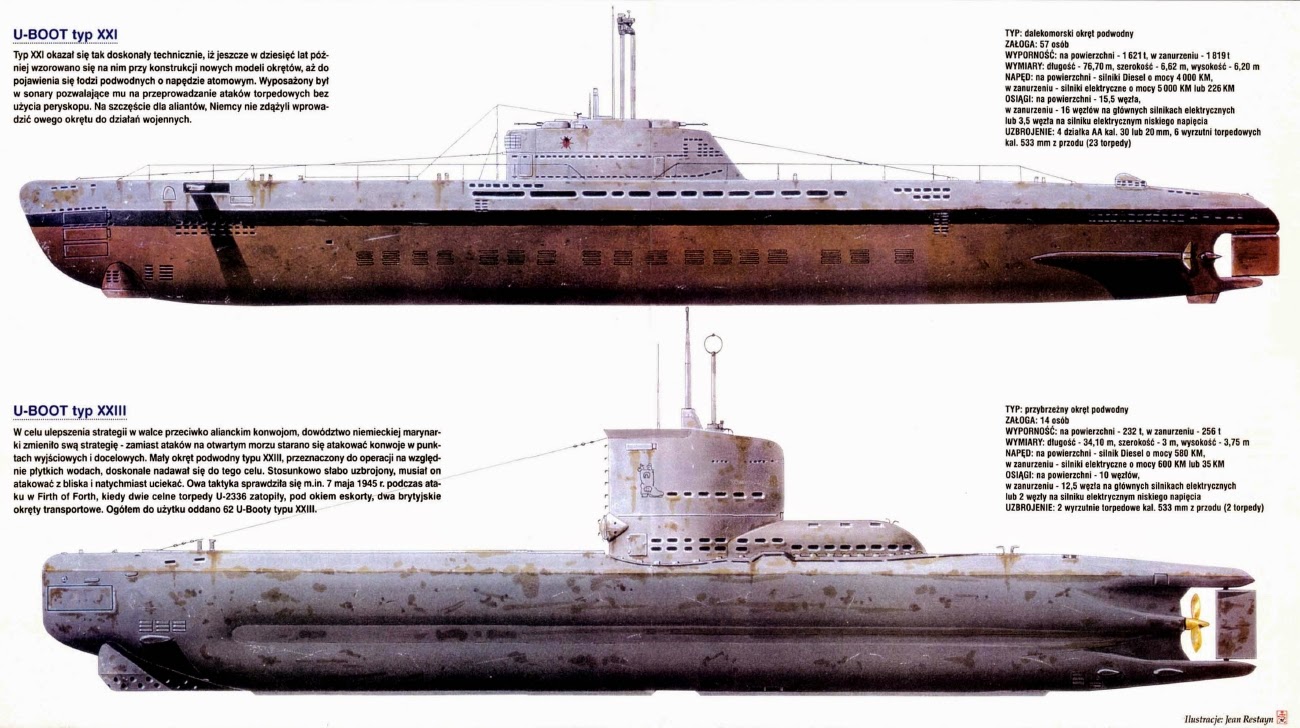 When the Third Reich collapsed in May 1945, teams of American, British and Russian submarine experts converged on German dockyards to locate and recover every scrap of information about the latest U-boat designs. In particular they wanted details of the Type XXI and the even more advanced HTP-driven Type XVII. The Americans and British raised two Type XVIIBs and put them back into service for trials, while the Russians took several hull sections away.

It was 1918 all over again, with the victors almost coming to blows over their shares of the loot. In the end the Americans and British got the lion's share because their armies had overrun the principal shipyards and factories in the West. In all, nearly 40 U-boats were incorporated into various navies, some for trials but others as part of the postwar fleet.

Although the Walter turbine was of great interest, it proved unreliable and offered only limited endurance at great cost. Only the Royal Navy went to the lengths of building HTP boats postwar in an effort to make the system work, and for a while its two experimental boats, HMS Excalibur and HMS Explorer, established a new underwater speed record by exceeding 27 knots. The Type XXI offered a more useful line of enquiry, although the influence of the design itself has been greatly exaggerated by a number of historians and analysts. But there were a number of problems: the hull form had not been tank-tested and proved unstable in service, the internal arrangement of equipment was far from ideal, and there were serious weaknesses in construction. Although the Soviet Navy built a number of boats which closely resembled the Type XXI, the Royal Navy and the US Navy were happier to adapt the best features to fit in with their own designs. Thus the concepts of the Type XXI - the large-capacity batteries and the mechanical reloading gear for the torpedo tubes - became standard around the world.

THE GUPPY PROGRAMME
In 1946, the US Navy began its Greater Underwater Propulsive Power (GUPPY) programme, upgrading the large number of 'Gato', 'Balao' and 'Tench' class boats built during the war.

The basic elements of the GUPPY conversion included streamlining the hull and augmenting underwater power. The prototypes Odox and Pomodon were originally intended to act as fast targets for training surface anti-submarine forces, and to cope with an expected improvement of performance in Soviet submarines. The conning tower was replaced by a streamlined 'sail', which enclosed periscopes and snorkel mast. The characteristic buoyant bow (intended to improve surface performance) was replaced by a round bow, and every possible piece of equipment likely to cause resistance was either removed or made retractable. It was not easy to find space internally for more battery cells because the wartime fleet boats were by no means spacious. The solution was to remove the auxiliary diesel-generator from the after-engine room and reposition it in the space formerly occupied by the magazine for the redundant deck-gun.

Much work had to be done on battery technology to achieve higher output. By accepting a shorter life (18 months) and designing a smaller battery-cell, it was possible to provide four main batteries of 126 cells each (the original boats had only two). This brought new problems, for the high-capacity batteries generated more hydrogen and heat, increasing the risk of fire and explosion. After experimenting with a closed-cell system the US Navy reverted to a water-cooled open-cell system, and the air-conditioning equipment was boosted by nearly 300 percent to handle the extra load.

Apart from minor teething troubles the GUPPY I conversion proved successful. A simultaneous programme to improve the snorkel was running at Portsmouth Navy Yard in New Hampshire. The basic problem was that exhausting gases underwater created more back-pressure than the diesels could handle. The American two-cycle diesels suffered pressure fluctuations when the float valve closed, whereas the wartime German four-cycle diesels were not badly affected. Some components of the Fairbanks Morse and General Motors diesels were redesigned to cope with the stresses, but the ultimate solution was to replace the simple float valve with an air-actuated head valve designed to act rapidly and positively. The opening and closing was now controlled by three electrodes located near the snorkel head. When a wave broke over the head it completed a circuit, directing air to shut the valve.

The exhaust mast was designed to be raised with the induction mast, and to ride about 1.21-2.4m (4-8ft) below the surface. The exhaust port was fitted with baffles to reduce the amount of smoke and haze reaching the surface. A mast similar to that in the Type XXI boats was tried in the USS hex in 1947, but it threw up a highly visible plume of spray. The US Navy boats, being much larger than the U-boats, needed a much bigger snorkel head and mast to draw in sufficient air, and a major redesign of the head was needed to reduce the plume. Three types of snorkel were developed: the original GUPPY I type; a simpler type for the unmodernised fleet boats, and a sophisticated type for fast attack boats. Even nuclear submarines need snorkels; they are needed if the boat is running on the auxiliary diesel-electric system, and it is still the quickest way to rid the interior of the boat of the various contaminants which cannot be absorbed by the air-purification system.

The success of the Odax and Pomodon led to a further 22 'Balao' class boats being converted, but after further improvements all 24 were redesignated the GUPPY II type. In 1950, a cheaper and simpler GUPPYIA was authorised for ten more 'Balao' class, while the GUPPY IIA conversion (16 boats) included streamlining but substituted a bigger sonar installation for the two forward sets of machinery.

The GUPPY concept was adopted by other navies. The Royal Navy converted its 'A' and T' classes along similar lines, lengthening the hulls to accommodate more batteries. The snorkel was also introduced, but nicknamed the 'snort', a copy of the German folding type. Only after the disastrous loss of HMS Affray in 1951, when her snort mast fractured, did the Royal Navy turn to the US Navy's telescopic type, which was enclosed by the sail.
Posted by Mitch Williamson at Friday, March 06, 2015
Email ThisBlogThis!Share to TwitterShare to FacebookShare to Pinterest
Labels: Technical
Newer Post Older Post Home