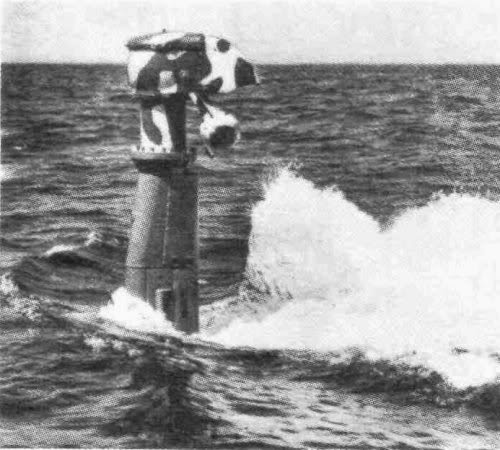 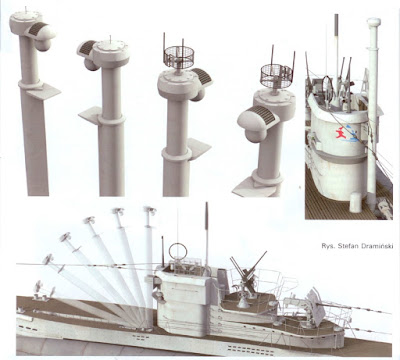 German version of the Snorkel 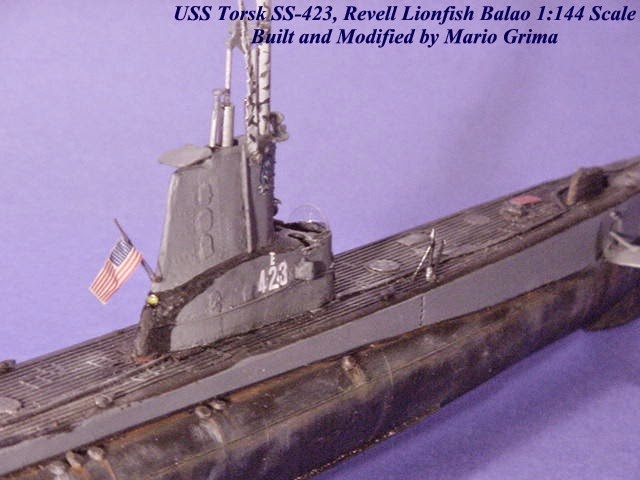 USS Torsk - last ship to sink enemy vessel in World War II: One of several Tench Class submarines still located inside the United States. Nicknamed the "Galloping Ghost of the Japanese Coast," the vessel is the only ship of the United States Navy to be named for the torsk fish. Torsk received two battle stars for World War II service and the Navy Commendation Medal for her service during the Cuban Missile Crisis. She set the all-time record of career dives, at 11,884. She is also the only submarine converted in the Fleet Snorkel program that has the original snorkel.

The Russian BARS CLASS of 1915, the Kuguar, was fitted with a telescoping tube to supply air to operate the diesels while submerged, a forerunner of the snorkel.

To reduce the unbearable losses inflicted by radar equipped escorts and aircraft, U-boat designers resuscitated an idea they had found in captured Dutch submarines in 1940. The Schnorchel (nostril) was an air mast, originally intended to ventilate the interior of the boat, but in 1943 it promised a way to allow a U-boat to recharge its batteries without surfacing. The diesel-generators could be run at full power, while a masthead float valve prevented water from flooding the boat (small amounts of water were vented outboard). Used in rough weather it caused extreme discomfort to the crew by causing rapid changes in air pressure, but the alternative was destruction.

In practice the Schnorchel (later Americanised to 'snorkel') did some damage to morale, and some of the inexperienced U-boat commanders were reluctant to use it for long periods. Radar warning receivers were used to detect hostile transmissions, but the performance of Allied radars outpaced the German scientists' efforts to counter them. Rubber coatings were used to absorb sonar energy and the pillenwerfer bubble decoy was introduced. It functioned like a giant Alka Seltzer, producing flat bubbles in the water, but experienced asdic operators rarely mistook them for genuine targets.

In 1946, the US Navy began its Greater Underwater Propulsive Power (GUPPY) programme, upgrading the large number of 'Gato', 'Balao' and 'Tench' class boats built during the war.

The basic elements of the GUPPY conversion included streamlining the hull and augmenting underwater power. The prototypes Odox and Pomodon were originally intended to act as fast targets for training surface anti-submarine forces, and to cope with an expected improvement of performance in Soviet submarines. The conning tower was replaced by a streamlined 'sail', which enclosed periscopes and snorkel mast. The characteristic buoyant bow (intended to improve surface performance) was replaced by a round bow, and every possible piece of equipment likely to cause resistance was either removed or made retractable. It was not easy to find space internally for more battery cells because the wartime fleet boats were by no means spacious. The solution was to remove the auxiliary diesel-generator from the after-engine room and reposition it in the space formerly occupied by the magazine for the redundant deck-gun.

Much work had to be done on battery technology to achieve higher output. By accepting a shorter life (18 months) and designing a smaller battery-cell, it was possible to provide four main batteries of 126 cells each (the original boats had only two). This brought new problems, for the high-capacity batteries generated more hydrogen and heat, increasing the risk of fire and explosion. After experimenting with a closed-cell system the US Navy reverted to a water-cooled opencell system, and the air-conditioning equipment was boosted by nearly 300 percent to handle the extra load. Apart from minor teething troubles the GUPPY I conversion proved successful. A simultaneous programme to improve the snorkel was running at Portsmouth Navy Yard in New Hampshire. The basic problem was that exhausting gases underwater created more back-pressure than the diesels could handle. The American two-cycle diesels suffered pressure fluctuations when the float valve closed, whereas the wartime German four-cycle diesels were not badly affected. Some components of the Fairbanks Morse and General Motors diesels were redesigned to cope with the stresses, but the ultimate solution was to replace the simple float valve with an air-actuated head valve designed to act rapidly and positively. The opening and closing was now controlled by three electrodes located near the snorkel head. When a wave broke over the head it completed a circuit, directing air to shut the valve.

The exhaust mast was designed to be raised with the induction mast, and to ride about 1.21-2.4m (4-8ft) below the surface. The exhaust port was fitted with baffles to reduce the amount of smoke and haze reaching the surface. A mast similar to that in the Type XXI boats was tried in the USS hex in 1947, but it threw up a highly visible plume of spray. The US Navy boats, being much larger than the U-boats, needed a much bigger snorkel head and mast to draw in sufficient air, and a major redesign of the head was needed to reduce the plume. Three types of snorkel were developed: the original GUPPYI type; a simpler type for the unmodernised fleet boats, and a sophisticated type for fast attack boats. Even nuclear submarines need snorkels; they are needed if the boat is running on the auxiliary diesel-electric system, and it is still the quickest way to rid the interior of the boat of the various contaminants which cannot be absorbed by the air-purification system.
Posted by Mitch Williamson at Sunday, March 08, 2015
Email ThisBlogThis!Share to TwitterShare to FacebookShare to Pinterest
Labels: Technical
Newer Post Older Post Home