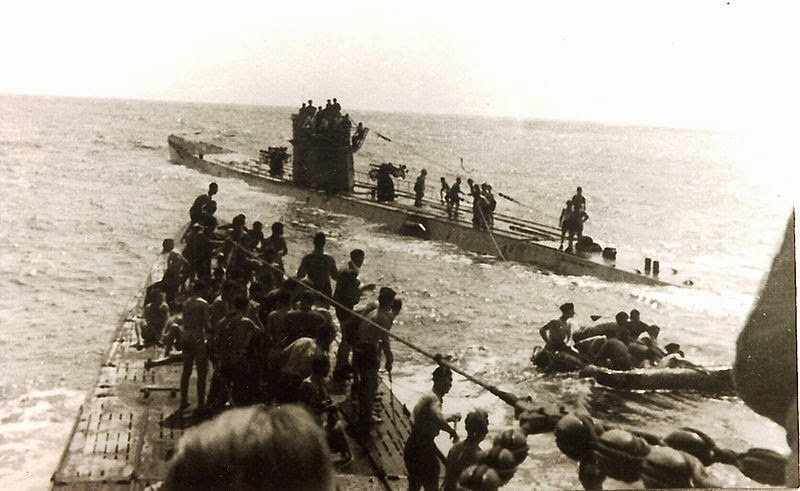 A singularly unfortunate chain of events was taking place in the South Atlantic. Human errors of judgement that end up in costing lives are always to be regretted whether they occur in peace or wartime, and the Laconia affair was one such tragedy that could have been avoided but sadly wasn’t for all the wrong motives. It began some 500nm (926km) northeast of Ascension Island with the torpedoing late at night (2200 hours) of a large Allied transport by the Type IX U-boat U156 on 12 September. Kapitänleutnant Werner Hartenstein, U156’s much decorated commander, had not bargained on the former White Star liner Laconia (19,695 tons) carrying in addition to her crew of 136 a group of eighty women and children, 428 British and Polish troops and some 1,800 Italian POWs at the time of her sinking. Once U156 had surfaced after the attack, Hartenstein was greeted by a quite unforgettable sight of well over two thousand people bobbing around in the water struggling for survival. After informing his superiors in Hamburg, he began picking up as many survivors as possible, stashing them wherever room could be found for them both above and below deck, and helping to cram even more into Laconia’s few usable lifeboats. Helpful though this was, there were still hundreds of others who were clinging to life in the sea and so Hartenstein used his W/T to broadcast in plain language an appeal for help in rescuing these survivors from both friend and foe alike. All sides scrambled to help: Dönitz sent two U-boats (U506 and U507) as well as an Italian submarine (Cappellini) to the scene; the Vichy French agreed to send some vessels from their ports in Senegal and Dahomey; and the British dispatched their auxiliary cruiser Corinthian and merchant ship Empire Haven from Takoradi, but did so with a request for air support from the American base on Ascension Island just in case the German promise not to attack them did not amount to much. After being on the surface for more than two and a half days, U156 was joined on 15 September by the other U-boats that Dönitz had sent to assist in the rescue attempt. All four submarines with Red Cross flags festooned all over their gun decks and their hulls lined with survivors then began the slow process of towing the serviceable lifeboats to a rendezvous with the Vichy French ships that were coming from the West African coast.

On the following day Lieutenant James Harden piloting a US B-24 Liberator bomber from the USAAF 343rd Bombardment Squadron was on his way from Ascension Island to Africa when he chanced upon this strange procession far below him and radioed back to base on Ascension Island informing the American authorities of what seemed to be afoot. It fell to Captain Robert Richardson III, the senior officer on duty that morning, to make the fatal decision of whether to help or hinder the rescue attempt. Richardson decided that U-boats were fair game wherever and whenever they were spotted, regardless of whether they were flying Red Cross flags or not, and ordered Harden to attack the submarines while they remained sitting ducks on the surface and before they had a chance to dive out of sight. It was the wrong move and had tragic consequences. Harden failed to plant a bomb on any of the four submarines, but in straddling U156 he did manage to drop one bomb that landed amongst the lifeboats. Amazed by this turn of events, Hartenstein cast off the remaining lifeboats and promptly submerged, cascading all those survivors that had been living on his hull for several days into the water. In the end, 1,083 managed to survive the entire ordeal, the majority of them being picked up some hours later by three Vichy French warships and taken back to port in West Africa. Although all four U-boats escaped Harden’s bombing and depth charging, Dönitz was so incensed by this example of squalid opportunism on the part of the Allies that he issued the fateful Laconia orders on 17 September. These would be used four years later to convict him of war crimes at the Nuremberg Trials. His orders were quite explicit and indicated that in future no U-boat commanders would trouble themselves attempting to rescue any survivors from enemy vessels other than those drawn from the ranks of captain or chief engineer who were needed for purposes of interrogation. His Laconia orders exposed a deep vein of ruthlessness in Dönitz, but Richardson’s crass error of judgement in the first place in seeking to take advantage of the situation was surely no better.
Posted by Mitch Williamson at Friday, March 06, 2015
Email ThisBlogThis!Share to TwitterShare to FacebookShare to Pinterest
Labels: History
Newer Post Older Post Home