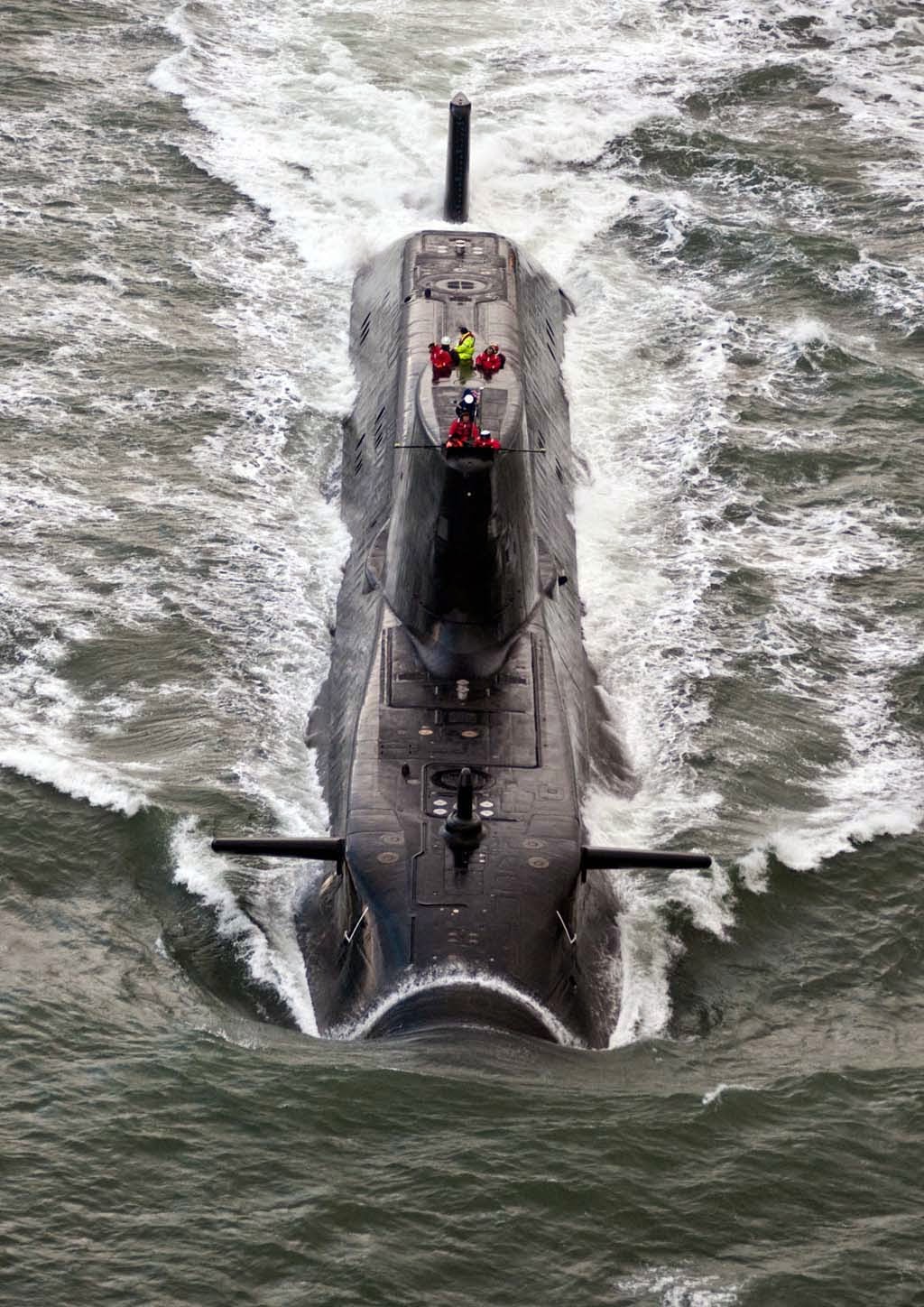 Measuring nearly one hundred metres from bow to stern, Astute is longer than ten London buses. When fully stored, she will displace 7,800 tonnes of sea water, equivalent to 65 blue whales. The Astute submarine has the latest stealth technology, a world-beating sonar system and is armed with 38 torpedoes and missiles - more than any previous Royal Navy submarine. She will be able to circumnavigate the entire globe while submerged and advanced nuclear technology means that she will never need to be refuelled.

UK, Barrow-in-Furness: The first of class Astute nuclear powered attack submarine left BAE Systems’ shipyard at Barrow-in-Furness for the first stage of sea trials designed to prove its capability as the most formidable vessel of its kind ever operated by the Royal Navy.

Astute is now on her way to Her Majesty’s Naval Base Clyde at Faslane where she will be based for her operational life.

“I would like to take this opportunity to personally thank every single person in the business who have played their part in helping deliver the boat, in particular the Dockside Test Organisation and Astute team who have been an absolute strength over the past few months.”

During the transit from Barrow to Scotland, Astute is scheduled to start a period of sea trials that will continue for many months. For much of that time the Royal Navy crew will be accompanied on board by BAE Systems engineers and technicians who will work alongside them to monitor and measure every element of the submarine’s performance against the design parameters.

BAE Systems will also have personnel based at Faslane to deliver the initial in-service support for the submarine.

Astute is the most advanced attack submarine ever supplied to the Royal Navy, incorporating the latest stealth technology combined with a world class sonar system and equipped with Spearfish torpedoes and state of the art Tomahawk land attack missiles to make her a supremely effective naval asset.

Astute is designed to fulfil a range of key strategic and tactical roles including anti-ship and anti-submarine operations, surveillance and intelligence gathering and support for land forces. Displacing 7,400 tonnes and measuring 97 metres from bow to propulsor, Astute is significantly larger than the Swiftsure and Trafalgar class submarines that she will replace but requires fewer crew to operate her due to the advanced technology and automated systems on board.

That technology encompasses many innovations designed to improve operational effectiveness while also reducing costs to help achieve the affordability challenges facing the Ministry of Defence. The 2076 Sonar system is the most effective in the world, giving Astute a key tactical advantage in locating and identifying other vessels, while the stealth characteristics of the submarine design make it the quietest the Navy has ever operated, enabling it to avoid detection and fulfil its role within the ‘Silent Service’, as submarines are known.

Unlimited power is provided by the pressurised water nuclear reactor that is capable of powering a city the size of Southampton, and the Astute is capable of remaining submerged and circumnavigating the globe during a 90-day patrol, creating her own air and fresh water from the ocean. Astute is equipped with a digital optical mast system to replace the traditional periscope and this offers low light and infra-red capabilities to enable her to rapidly capture and analyse visual data, and share it with other fleet assets.

Luxury is not a word that normally appears in the submarine vocabulary – Astute is all about operational capability – but her crew will be the first to each have their own bunk, removing the need for ‘hot bunking’ when during shifts one crewman would occupy a bunk vacated by another. Astute also has a comparatively large and extremely well-equipped galley to ensure the meals that punctuate the round the clock watch system are of the highest standard.