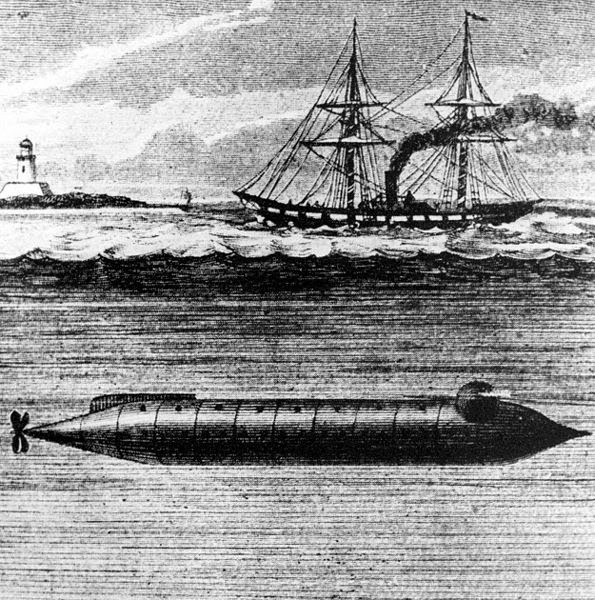 Submarines are defined as watercraft capable of independent operation below the surface of the water. Submersibles have only limited underwater capability. American inventors had experimented with submarines since David Bushnell's Turtle of the American Revolutionary War. Among other submarines proposed or built in the years before the Civil War were two by the Indiana shoemaker Lodner D. Phillips, the second of which succeeded in diving to 100 feet in 1852. Phillips offered his boat to the U. S. Navy but was rejected; he was turned down again when he offered to build another submarine at the outbreak of the Civil War in 1861. Nevertheless, the Civil War stimulated unofficial interest in submarines in both the Union and the Confederacy. The side in war without a major surface fleet is invariably the one most interested in new technology to offset the advantage held by its opponent. It was no surprise therefore that when the Civil War began the Confederacy experimented widely with torpedoes (naval mines) and semisubmersibles (the Davids) and submarines to deliver them.

At least three Northern projects saw fruition. The first, the Alligator, was the brainchild of Brutus de Villeroi, a French immigrant inventor who in 1859 had built a submarine for a Philadelphia treasure-hunting consortium. (Before coming to the United States, de Villeroi had taught mathematics in France. His students, it seems, included Jules Verne, whose 1870 novel Twenty Thousand Leagues under the Sea greatly popularized the notion of submarines.) De Villeroi's earlier project still was extant in 1861 when war came, and he staged a dramatic demonstration in Philadelphia Harbor to promote his concepts. The Alligator was built for the U. S. Navy by the Philadelphia Navy Yard but was never formally commissioned. After ineffective trials in the James and Appomattox rivers (the waters there were too shallow), the boat was refitted at Washington Navy Yard and was dispatched to engage in operations off Charleston, South Carolina. While under tow to the war zone, the Alligator foundered in a storm off the North Carolina Outer Banks on April 2, 1863; no lives were lost. The wreck is still the object of search efforts.