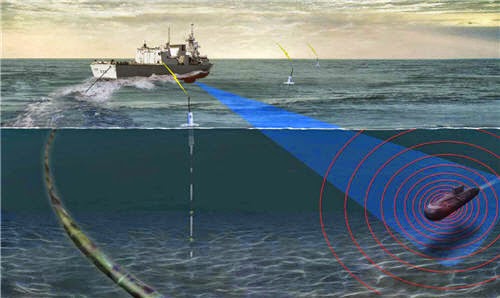 Sonar - SOund, NAvigation and Ranging
The word Sonar is an American term first used in World War II, it is an acronym for SOund, NAvigation and Ranging. The British also call Sonar, ASDICS, which stands for Anti-Submarine Detection Investigation Committee. Later developments of Sonar included the echo sounder, or depth detector, rapid-scanning Sonar, side-scan Sonar, and WPESS (within-pulseectronic-sector-scanning) Sonar.
United States submarines began using sonar toward the end of WW2 to navigate through Japanese minefields. Ned Beach, upon taking command of USS Piper (SS-409), had his first war patrol as skipper of that boat delayed while a sonar device for detecting and avoiding underwater mines was being installed. As a result, he and his submarine only reached Japanese waters, after negotiating through an underwater minefield submerged, just as the war ended.

Radio Operations Aboard US  Submarines
By Robert E. Straub
QC/JK SONAR:
Submarines were equipped with both active and passive sonar gear. The QC/JK gear was located in the Conning Tower. These were companion units with the QC gear being the active and passive sonar and the JK gear was the passive sonar only. Both sonars were manned when the submarine was submerged. A large bearing indicator, for both the QC and JK sonars, indicated the relative position to the submarine's bow of the sound head bearing. The QC sonar had the "pinging" capability, but was rarely, if ever, used due to compromising the submarine's position. The sound heads were raised. lowered and trained from the operating positions in the Conning Tower. The raising and lowering was done by a hydraulic system and the training was done by an electric motor controlled by a handle at the operating station for both the QC and JK sonars. The lowering and raising mechanism for the two sound heads was located at the after end of the forward torpedo room. This allowed the sound heads to be raised inside a protective well when the submarine was on the surface.
The QC sonar was equipped with a straight key and CW could be used for emergency or identifying purposes.
Normally headphones were worn by the sonar operators. However, speakers were available.

JP SONAR;
The JP Sonar gear, passive only, was located in the Forward Torpedo Room and its associated hydrophone was located directly overhead on the main deck. The hydrophone was coupled to the unit by means of a shaft, gear and a crank handle.
Rotation of the hydrophone was strictly by man power. With the hydrophone being located topside it allowed the submarine to "hear" when sitting on the ocean floor.
The sonar operators were trained to fire a special acoustic torpedo with this JP gear.
Late during WWII the JP sonar was replaced with the JT version. This used a larger hydrophone and the training mechanism was improved from the manual operation to a electrical/hydraulic system.
NOTE: I'm not sure of the designers of this sonar equipment, but I do believe that it was the Underwater Lab at New London, which I also believe has changed its name.
#
In World War II, the Americans used the term SONAR for their systems, coined as the equivalent of RADAR. RADAR was considered very glamorous and effective, and they wanted to cash in on the name. To be literal they should have named it SODAR (Sound Detection and Ranging) to be the equivalent of, standardization of signals led to the dropping of ASDIC in favor of SONAR for all NATO countries.

There are two major kinds of sonar, active and passive.
Active sonar creates a pulse of sound, often called a "ping", and then listens for reflections of the pulse. The pulse may be at constant frequency or a chirp of changing frequency. If a chirp, the receiver correlates the frequency of the reflections to the known chirp. The resultant processing gain allows the receiver to derive the same information as if a much shorter pulse of the same total power were emitted. In general, long-distance active sonars use lower frequencies. The lowest have a bass "BAH-WONG" sound. To measure the distance to an object, one measures the time from emission of a pulse to reception.
Passive sonars listen without transmitting. They are usually military (although a few are scientific). Passive sonar systems usually have large sonic databases. A computer system frequently uses these databases to identify classes of ships, actions (i.e. the speed of a ship, or the type of weapon released), and even particular ships.