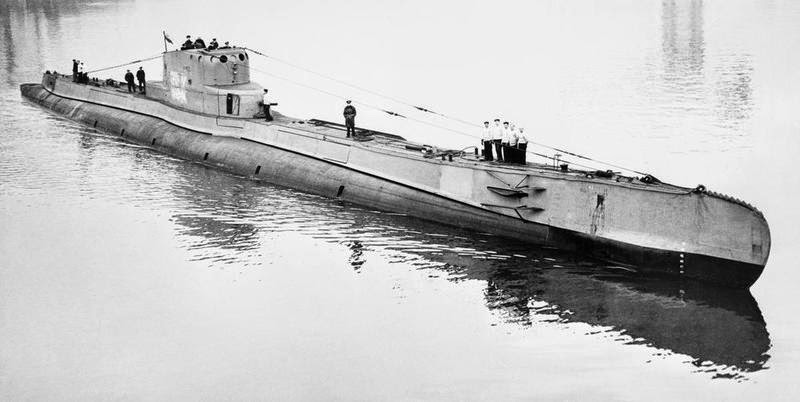 The Polish Navy submarine ORP Orzeł (Eagle) returning to her depot ship at Rosyth in WWII.


The traditional ship prefix in the Polish Navy is ORP (Okręt Rzeczypospolitej Polskiej - "Ship of the Republic of Poland").

ORP JASTRZAB - S CLASS (1918)
The first three boats of this class were built to competing designs from Electric Boat (a single-hull type), Lake, and the Bureau of Construction and Repair (both double-hull types). The Lake design was found unsatisfactory, and the firm built two series of boats to the bureau’s design, the original and an enlarged version. Two series of boats also used the Electric Boat design, the second series being enlarged.

ORZEL CLASS (1938)
These submarines were designed by the Nederlandsche Verenigde Scheepsbouw Bureaux in‘s-Gravenhage, in cooperation with a team from the Polish Navy. They incorporated many features of the earlier Dutch O. 16, including the external trainable mount. The hulls were entirely welded, and all controls were hydraulically operated. The Orzel escaped the German invasion of Poland to the United Kingdom and was mined in the North Sea on 8 June 1940. The Sept escaped and was interned in Sweden until the war’s end, when it returned to Polish service until it decommissioned on 15 September 1969.

ORP Kaszub M-Class SERIES XV (1940)
F. F. Polushkin designed this series of coastal submarines. They had a single all-welded pressure hull with saddle ballast tanks. The design was a great improvement on earlier coastal boats with its much greater range and heavier torpedo battery. None of the class were completed during World War II. Those remaining in Soviet Navy service were stricken in the 1960s.

ORP Wilk -PROJECT 641
This class of long-range submarines was developed to replace the earlier Project 611 type. Like the Project 633 type, they were equipped with a substantially more advanced sonar outfit and could dive deeper than their precursors.

ORP Orzeł - PROJECT 613
Design work on this class began immediately after World War II as a medium submarine to replace the earlier S and Shch types. Detailed examination of German Type XXI boats strongly influenced the final design, which incorporated, in a less pronounced form, the figure-eight midsection and distinctive stern contours of these boats. There were many detail variations between different series of these submarines, mainly in the exact number and disposition of the guns.

Large numbers of these boats were modified for special missions or experiments. Many also went to fleets within the Soviet sphere of influence: 5 to China (in addition to the 21 assembled there from Soviet-supplied components), 8 to Egypt, 2 to Bulgaria, 14 to Indonesia, 4 to Albania, 5 to Poland, 4 to North Korea, and one each to Cuba and Syria. By the early 1980s about 60 boats of the 215 built in the Soviet Union remained in service, and 18 still existed 10 years later.

ORZEL - PROJECT 877 CLASS (1986)
The Project 877 type was designed as an antisubmarine warfare platform with good patrol and reconnaissance characteristics. It was the first Soviet conventionally powered type to use a teardrop hull form. Great attention was paid to noise reduction through rafting machinery, eliminating flooding ports, locating the dive planes further aft, and providing an anechoic coating for the hull. Careful design and choice of materials also drastically reduced the type’s magnetic signature. These boats also introduced extensive automation of both ship and fire control to reduce crew size and improve safety. Later boats incorporated improved fire control systems and the capability to launch wire-guided torpedoes.

Large numbers of this type were built for export, usually with a slightly less capable sensor outfit. Most of the Russian boats went into reserve around 2000, but the export boats are still very active.