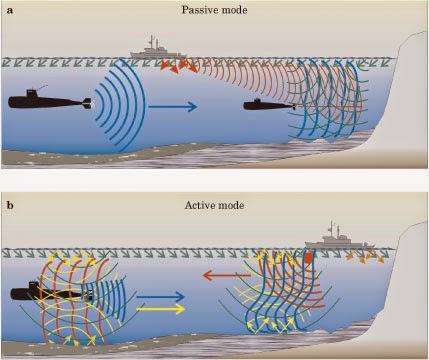 Sonar detection. (a) In this passive sonar scheme, the submarine on the right uses a towed array of detectors to distinguish sounds that originate from the one to the left. The towed array provides a large aperture to discriminate the desired signal (blue) that is distorted by the shallow−water environment and embedded in ocean surface noise (green) and shipping noise (red). (b) In active sonar, the ship sends out a pulse (red). Its echo (blue), distorted by the shallow−water environment, returns to the ship's receiver, which tries to distinguish it from backscattered reverberation (yellow) and ocean noise (green).

Like radio and radar, sound occurs on a spectrum of frequencies. High-frequency, short wavelength signals attenuate more quickly but can be detected with good angular resolution by small antennas, while low-frequency, long wavelength signals propagate further but require antennas with much larger apertures in order to achieve directional reception. To detect a signal, it must be distinguishable from any background noise, whether in the propagation medium, i.e., the ocean or in the receiver itself. The key variable that determines whether detection occurs is the signal-to-noise ratio. There are two basic approaches to maximizing the signal-to-noise ratios achieved by a sonar—antenna gain and processing gain.

Because the optimum diameter or aperture of an antenna varies directly with wavelength, very low-frequency sound reception is maximized by antennas with very wide apertures, which means that sonars designed to detect low frequency sound must be large. This explains the big bow arrays on the early SSKs, and it also explains the use of long line arrays for SOSUS. In the former case, the “gain” of the array was limited by the need to fit it on the bow of a submarine, whereas in the latter case, fixed, ocean floor arrays 1,000 feet in length were used, which maximized the antenna gain possible against even the lowest frequency signals.

High gain antennas increase the signal-to-noise ratio by nulling out reception of noise from all directions except that of the main beam of the antenna, but noise within the main beam remains. Thus, even when the main beam of such an array is pointing directly at a submarine, there is noise that competes with the submarine’s acoustic signature, and at long ranges this noise can still mask the submarine signal and prevent detection. Further filtering of this noise depends on signal processing within the sonar itself.
This processing usually exploits the fact that a submarine’s signature contains both a continuous, broadband spectrum of sound as well as discrete narrowband tonals at specific frequencies along that spectrum that rise above it. These tonals are caused by specific pieces of rotating machinery within the submarine, such as pumps, generators, and gears, whereas the continuous broadband spectrum is caused primarily by flow noise over the hull surface or by propeller cavitation. A submarine’s broadband signature resembles background noise in that it contains a continuous spectrum of frequencies within which sound source levels at particular frequencies rise and fall in random fashion around a mean, over time. By contrast, the narrowband component of a submarine’s signature generates sound at several specific frequencies continuously. Thus, compared to the background noise generated at these specific frequencies, which will average out over time to x, the signal plus noise received at the tonal frequency will average out over time to x + y, with y being the source level of the signal. In order to listen for these specific tonals, a sonar is given a spectrum analyzer that passes an incoming broadband signal through a set of narrowband filters tuned to the frequencies of interest. Narrowband processing will detect signal y as long as it remains high enough to be reliably distinguished from the background noise x. When first used in the early 1950s, it was given the name LOFAR (LOw Frequency Analysis and Ranging).

The significance of LOFAR was that it provided an additional, very powerful tool for increasing acoustic signal-to-noise ratios. For example, at close range, a simple sonar will detect a submarine’s broadband signal simply by pointing the main beam of its antenna at the submarine. The sonar is measuring all the sound it receives in a given direction, including both signal and background noise, and as it points in the direction of the target, the signal increases. As the range to the opposing submarine is increased, the relative strength of this broadband signature compared to the broadband background noise declines until it is drowned out and the signal-to-noise ratio drops below the detection threshold.

Using LOFAR, the same sonar would filter out most of the sound received by its main beam and focus only on those low-frequency tonals where the submarine’s source levels were highest. In those narrow frequency bins, the part of the submarine’s sound signature that propagates furthest is competing only with the background noise that exists at that frequency rather than the entire broadband noise spectrum, and the sonar can therefore detect that narrow component of the submarine’s overall sound spectrum at much greater ranges before noise drowns it out.

The effectiveness of passive sonars depends also on the relative position of the sound source and the sonar, and on the self-noise generated by the sonar platform. In the first case, the important variable is the existence of layers in the ocean which both reflect and absorb sound that strikes them at any but the steepest angles. In particular, there is normally a so-called surface layer ranging from several tens to several hundred feet deep, depending on location and seasonal variations. Most sound generated above this layer stays trapped above it and rapidly attenuates as it bounces back and forth between the surface and the layer itself. Only the sound that strikes the layer at a steep angle penetrates it. In deep water, this sound is then captured and focused by the SOFAR channel. A passive sonar below the layer is therefore far more effective than one that is above the layer, because the signal it seeks to detect will travel much further. Convergence zones, where sound from the SOFAR channel returns and is focused at the surface at approximately 25-mile intervals, are an important exception to this rule, and it is also possible to cover the area between the limit of direct path propagation and the first convergence zone using bottom bounce techniques.

Self-noise is also an important issue for sonar effectiveness for obvious reasons. Any sonar attached to a loud platform will perform less well than the same sonar attached to a quiet one. This is true regardless of whether one is seeking broadband or narrowband detections. Self-noise can be minimized both by reducing speed and through explicit attempts to design a more quiet platform. The methods used to quiet sonar platforms become more elaborate later in this story, but low speed was a factor from the beginning. Furthermore, speed and depth variations between target and source can reinforce each other.

Thus, one key to the passive acoustic approach to ASW at the outset of the Third Battle was the fact that Soviet diesel subs snorkeled on their diesels at 8 knots during long transits to and from ocean patrol areas. At speeds lower than 8 knots, the time spent in transit would simply grow too long, but while traveling near the surface at 8 knots and above, submarine propellers cavitate. By contrast, an SSK patrolling on battery at depth in the path of the snorkeler would neither be cavitating nor putting diesel machinery noise into the water, which would both maximize its detection range and minimize its counter-detection range. Under that particular set of circumstances, the SSK would have a formidable acoustic advantage.

To return to the ASW challenge posed by nuclear weapons and the nuclear submarine, passive acoustics, both broadband and narrowband, became an important element of the response in three areas—ocean surveillance, submarine versus submarine operations, and maritime patrol (VP) operations. Ocean surveillance for ASW was revolutionized by the development and deployment of SOSUS. Submarine versus submarine ASW underwent a similar revolution as a result of the rapid development and deployment of the Thresher, the first quiet nuclear submarine. And finally, the VP community underwent a revolution when it shifted from operations cued by HF/DF that used radar to search for surfaced or snorkeling submarines, to operations in which SOSUS provided the cueing data and acoustic sonobuoys were used to search the datum for submerged submarines.
Posted by Mitch Williamson at Sunday, March 08, 2015
Email ThisBlogThis!Share to TwitterShare to FacebookShare to Pinterest
Labels: ASW
Newer Post Older Post Home