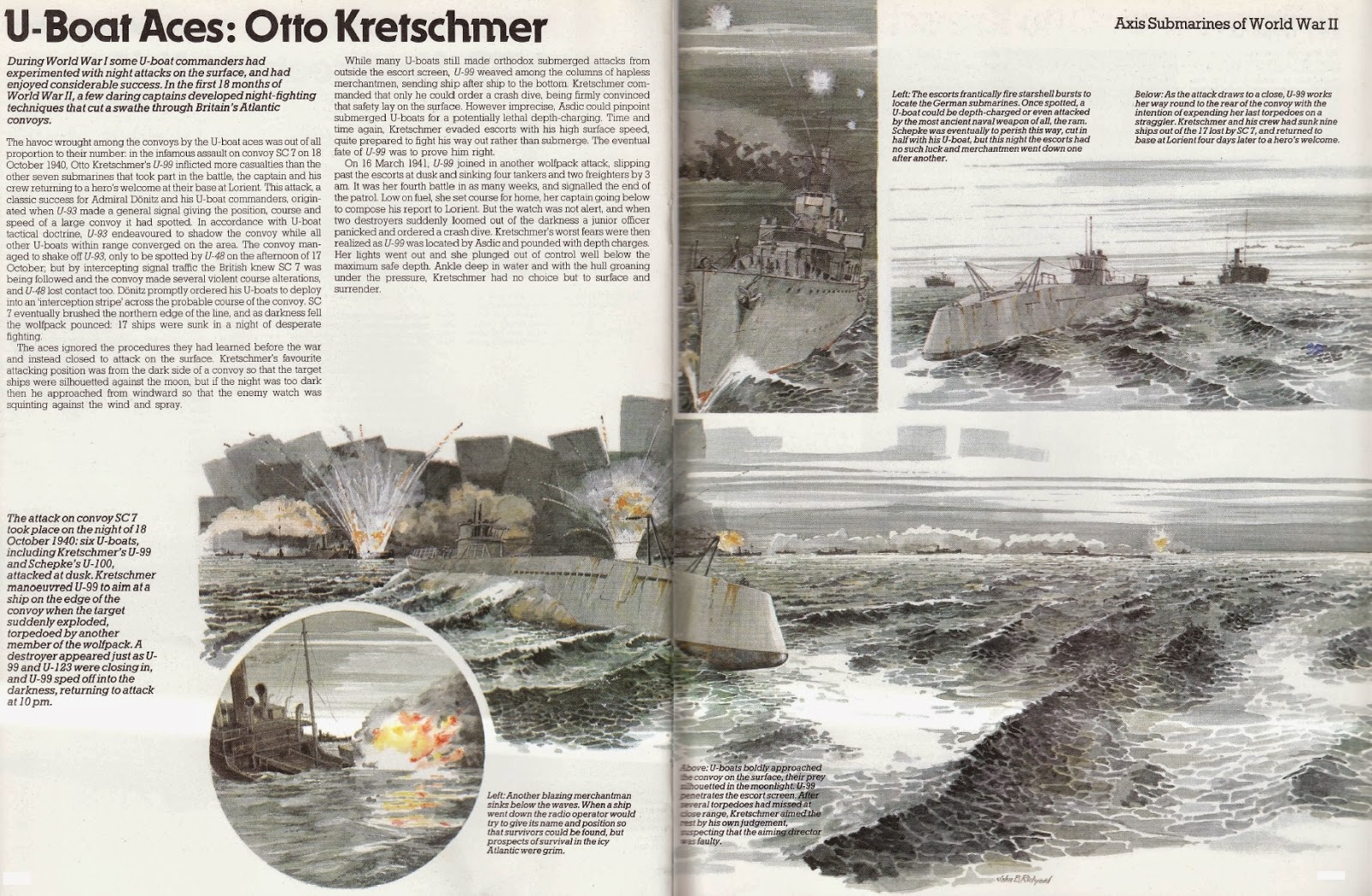 Flotilla Admiral Otto Kretschmer (1 May 1912 – 5 August 1998) was a German U-boat commander of the Second World War, and was the most successful Ace of the Deep. From September 1939 until being captured in March 1941, he sank 47 ships for a total of 274,333 tons. For this he received the Knights Cross with Oak Leaves and Swords, among other commendations. He earned the nickname "Silent Otto" both for his successful use of the "silent running" capability of the U-boats as well as for his reluctance to make radio broadcasts during patrols.

The German invasion of Poland found Kretschmer still in command of U-23, and he was soon sent into action along with the rest of the Kriegsmarine's U-Boat fleet. His first war patrols ranged across the North Sea and around the British coast. Kretschmer's first success came in Moray Firth where he attacked and sunk the Danish 10,517 ton tanker Danmark on January 12, 1940 using torpedoes. The British admiralty at that time thought that the tanker had struck a mine as they did not locate any U-boat in the area. A month later on 18 February, Kretschmer sank the 1,300 ton British fleet destroyer HMS Daring off the Pentland Firth while she was escorting convoy HN-12 from Norway. U-Boat crews almost always avoided deliberately engaging enemy destroyers, so the Daring's destruction was rightly seen as a very skillful attack by both Kretschmer and the U-23.

In April 1940, after eight patrols, Kretschmer left the U-23 and was transferred to the newly-completed Type VII B U-99, and in a sense started his legacy. After two months' training and shakedown maneuvers in German waters, U-99 went into action in June 1940. During the first four patrols of the U-99, Kretschmer started attacking convoys at night on the surface, taking down merchant ships with highly accurate shots, using only one torpedo per target ship in order to save ammunition, and the quote "One torpedo ... one ship" is attributed to Kretschmer from around this time. Kretschmer's tactics were widely copied throughout the U-Boat force, although they achieved mixed results in practice.

His most successful patrol occurred in November-December 1940. During that patrol, Kretschmer and U-99 sank three British armed merchant cruisers, HMS Laurentic (18,724 tons), HMS Patroclus (11,314 tons) and HMS Forfar (16,402 tons). Laurentic and Patroclus were sunk on the night of 3–4 November after they responded to distress calls from the 5,376 ton British freighter Casanare, which U-99 had mortally wounded about 250 miles west of Ireland. Forfar was sunk a month later on 2 December while steaming to join up with and escort outbound convoy OB-251. Put together, the three AMCs totalled over 46,000 gross tons. These three successes earned Kretschmer the number-one spot on the Aces list, and was never surpassed. Klaus Bargsten served aboard U-99 under Kretschmer, before being promoted to captain himself and becoming the sole survivor of U-521 on 2 June 1942. Siegfried von Forstner was another of Kretschmer's student officers aboard U-99 who later received the Knight's Cross of the Iron Cross for sinking 15 ships as commanding officer of U-402.

Kretschmer was also meticulous in his conduct towards the crews of torpedoed ships. When attacking lone merchant ships in the days before wolfpack tactics began in earnest, he had been known to hand down bottles of spirits and blankets into lifeboats and give them the course to the nearest land. On one patrol in September 1940, Kretschmer had also retrieved a survivor of another torpedo attack who was alone in the Atlantic on a small raft and took him aboard, transferring him later to a lifeboat after his next successful attack.

On his last patrol in March 1941, he sank 10 more ships, but these were to be Kretschmer's last victims. On 17 March 1941, during a counterattack by British escorts of Convoy HX-112, U-99 was disabled after repeated depth charge attacks by the British destroyers HMS Walker and HMS Vanoc. Kretschmer surfaced and, under fire from the British vessels, scuttled his boat. Three of his men were lost, but Kretschmer and the remainder of U-99's crew were captured by the British. The same day saw the British escorts scored another success against the Kriegsmarine: another noted U-Boat skipper, Joachim Schepke, was killed aboard U-100 when that boat was rammed and sunk in heavy fog by Vanoc.

Kretschmer's usual standards of conduct were evident during the sinking of his boat; he signaled HMS Walker asking for rescue for his men, took pains to ensure as many left the submarine as possible, and assisted some of his crew towards the rescue nets hung from the British destroyer. Kretschmer's strength was evidently failing in the cold water and his own rescue was at the hands of a British sailor who climbed down the nets and plucked him from the water.
Posted by Mitch Williamson at Sunday, March 08, 2015
Email ThisBlogThis!Share to TwitterShare to FacebookShare to Pinterest
Labels: Biography
Newer Post Older Post Home