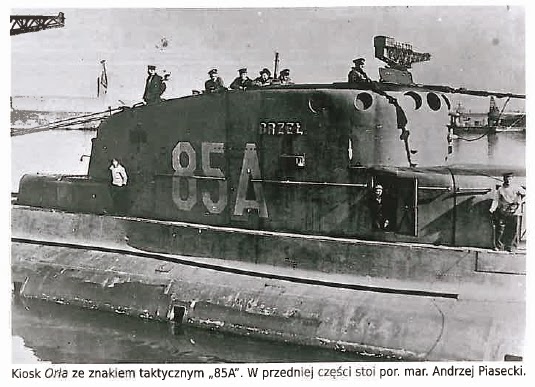 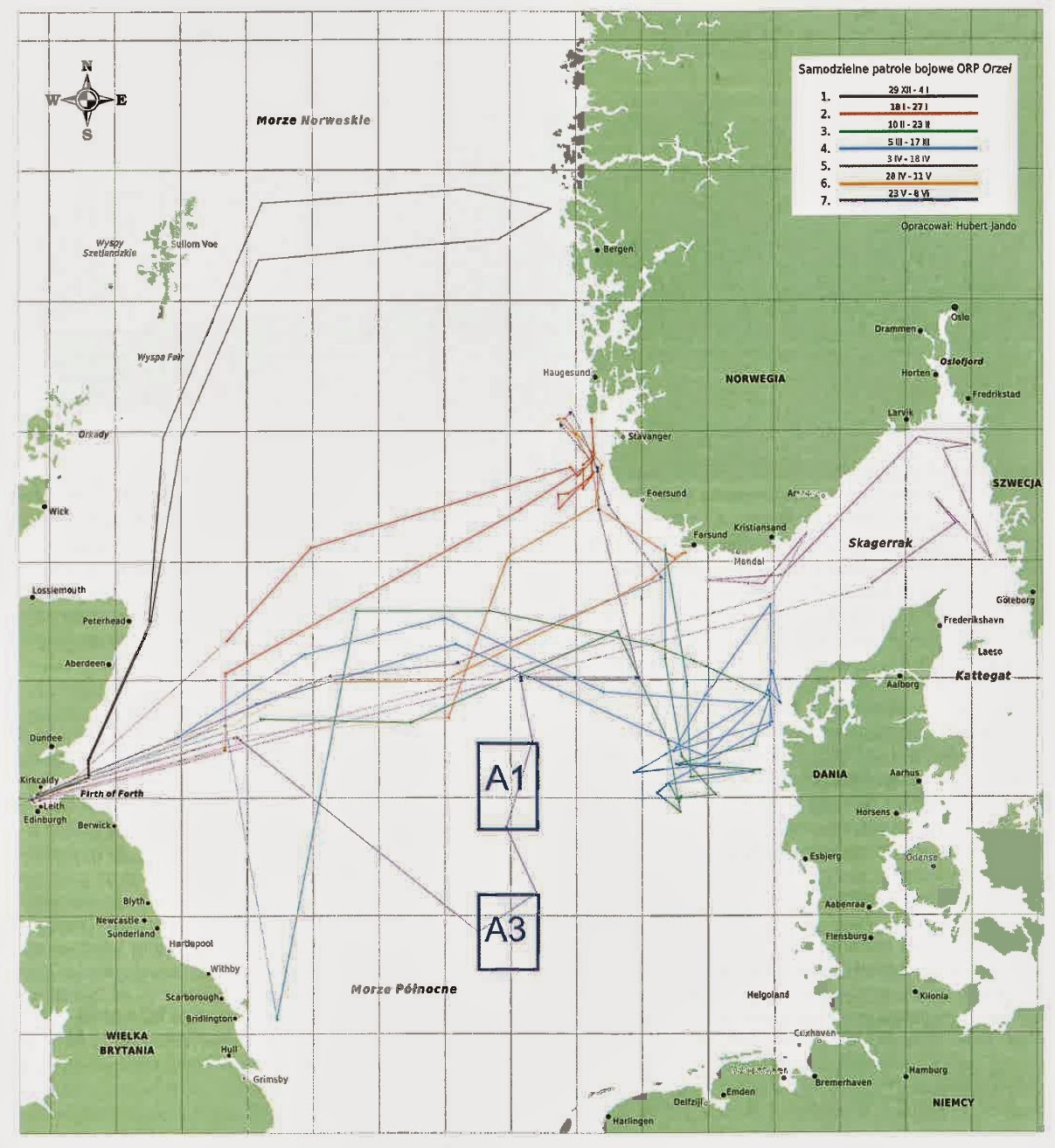 The Escape – September 1939
Orzel was surrounded by Estonian gunboats and armed guards boarded her and confiscated charts. Next day, breech mechanisms were dismantled from the guns, ammunition unloaded and 14 torpedoes removed. Further unloading, on 17 September, of torpedoes from the after tubes proved to be impossible because of sabotage.

The Poles now began preparations for escape. A fairway to the northern entrance of the harbour was sounded under the pretext of angling; mooring lines were partially sawed and the dismantling of various vital parts stopped under the pretense of preventive maintenance. On the night of 18 September, at 0200hrs, Orzel slipped her lines and, under the nose of the gunboat Laine, broke out with two overpowered Estonian guards onboard. She was machine gunned in the harbour area and then struck the breakwater and edged up the bow on blocks. Fortunately, a light breeze formed a screen of exhaust gases which obstructed the view of the Estonian gunners and gave her enough time to break out. Later, Orzel was ineffectively shelled by the Nargön Isle battery.

The main problem was navigation without charts in the confined Baltic waters. Because of the absence of the codebook (destroyed in Tallin) the vessel could not risk a wireless contact with the Hela base because of German listening stations. Fortunately, a list of Baltic lighthouses had avoided requisition and Sub-Lt Mokrski was able to prepare ‘a hand-drawn map with depths given 'in meters and conjectures'.

Following Orzel's break out from Tallin, the Soviet Baltic Fleet reported attacks on Soviet freighters by 'unknown' submarines. This action came to a climax when, on 26 September, the steamer Metallist was sunk, which gave the Soviets an excuse to claim rights to defend Soviet Socialistic Republic.

To deny German accusations of murdering the two Estonians, Lt Grudzinski decided to disembark them on the coast of Gotland and this was done on the night of 20 September. Then Orzel began to patrol in this area. After the internment of Zbik on 27 September, Orzel was the last operational Polish submarine on the Baltic and she caused serious aggravation to the OKM (Oberkommando der Marine), particularly when trying to stop a German vessel three days later. Unfortunately, Lt Grudzinski could not hope for any success trying to execute rules of the International Law concerning submarine warfare, imposed on all the Polish commanders by the C-in-C of the PMW, Rear-Adm Unrug.

To Rosyth and Norway Patrols
On 2 October, the garrison of Hela capitulated and the lonely Baltic patrol of Orzel became pointless. Furthermore, she was desperately short of fresh water. Lt Grudzinski decided to head for Britain, and with the new 'chart' prepared entered the sounds on 8 October and arrived at Kattegat two days later where she remained for 24 hours trying to hunt German ships. The same was repeated the day after, but when a minefield was discovered Orzel headed for Britain.

The arrival of Orzel in Rosyth brought the number of Polish warships in Britain up to five which, under the agreement of 18 November, formed the Polish Naval Detachment in Great Britain.

Early in November 1939, Orzel began an overhaul at the Caledon Yard. Dundee and necessary conversions were made to adapt her to British practice and weapons. Her tubes were refitted to house Mk VIII torpedoes while new breech mechanisms for the guns were ordered from Sweden. These did not arrive before the ship was lost.

On 1 December, Orzel commissioned with the Second Submarine Flotilla in Rosyth under the flag of Capt Stephens (RN) and was given the pendant number 85 A. She then began routine patrols and convoy escort duties off Norway.

On 8 April 1940, during her fourth patrol in Norwegian waters Orzel detected the German steamer Rio de Janeiro (5261 tons gross) of Lillestand. At 1100hrs, she surfaced and, aiming with her breechless gun, she ordered the German crew to abandon ship. One torpedo was fired at 1205hrs but the main bulkheads of the ship remained intact and only a second torpedo, fired at 1315hrs, caused the explosion which sunk the German steamer. Survivors in Wehrmacht uniforms were picked up by local fishing boats and claimed that they were sent to protect Norway's independence against Anglo- French invasion. Actually, Rio de Janeiro had been designated to disembark 400 German troops and war material at Bergen as one of the I Seetransport- Straffel of 15 troopships. Unfortunately, this unmasking of German intentions was not given a proper notice by allied or Norwegian authorities.

On 10 April, staying practically in the mainstream of German invasion traffic, Orzel probably sunk an armed trawler and the next day she had to abandon an attack on a liner because of enemy escort countermeasures.

The sixth patrol off Norway which Orzelbegtn on 23 April was her last. One 2 June, she was ordered to proceed to Skagerrak and three days later was called to end the patrol on 6 June and return to Rosyth. Being overdue by 8 June, Orzel was asked to report her position but this was not done and on 11 June the KierMar- Woj officially announced that Orzel was lost.

In the opinion of V-Adm Horton, Flag Officer (S), which was expressed during the Admiralty Conference of 6 August 1940, Orzel was sunk by an enemy aircraft on 29 May southwest of the German Warngebiet (Warning Zone). This information supported the announcement of the OKM of 29 May, that the enemy submarine was sunk by an aircraft bomb in the middle of the North Sea.

The official statement issued by the British Admiralty after the war, disclosed that the course of Orzel, eastward of her patrol zone, passed through a previously unchartered enemy minefield. Therefore, it was assumed that Orzel was sunk on mines on 25 May 1940 in position 57*N, 3*40'E.
Posted by Mitch Williamson at Friday, March 06, 2015
Email ThisBlogThis!Share to TwitterShare to FacebookShare to Pinterest
Labels: History
Newer Post Older Post Home