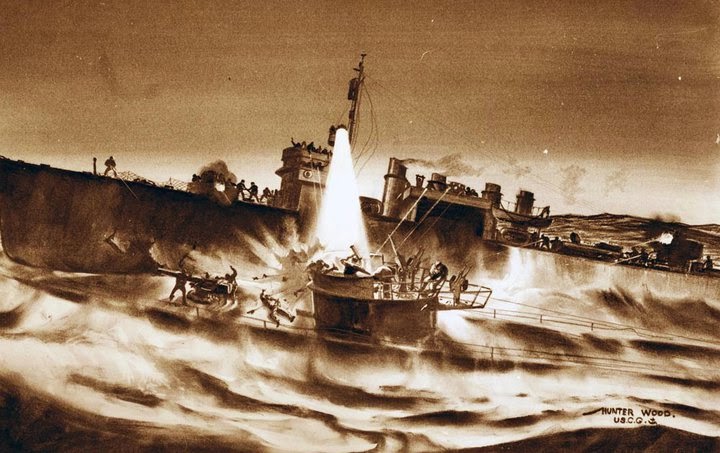 
After an hour of chasing in each other in circles and shooting at each other, USS Borie (DD-215) tried to ram U-405 and ended up in a "V" pattern as the destroyer's keel came to rest on the deck of the U-boat after being lifted by a large wave. The main armament of both vessels could not be used in this position. The result was a bloody small arms shooting match and crews on both sides throwing "everything but the kitchen sink" at each other. Some threw tools. Others threw potatoes at the enemy. While locked together in rough seas, the boats ground against each other. When Borie came down on U-405's foredeck, it caused irreparable flooding in the forward engine room. After a while, another large wave lifted the boats apart. As soon as they were apart, the firing and chasing resumed. Borie tried to torpedo U-405. U-405 tried to ram Borie. Eventually, the USS Borie got off a K gun salvo which crushed the hull of U-405. The U-405 sank rapidly as twenty of her crew launched life rafts. The Borie had problems with progressive flooding. The primary radio had been destroyed by a shell from U-405 so she had been unable to get off any radio messages. Her crew was able to get the emergency radio transmitter working by powering its generator with all of the lighter fluid they could find. They were finally able to radio that they were sinking. All of the 27 fatalities on Borie were a result of rescue operations in heavy seas.