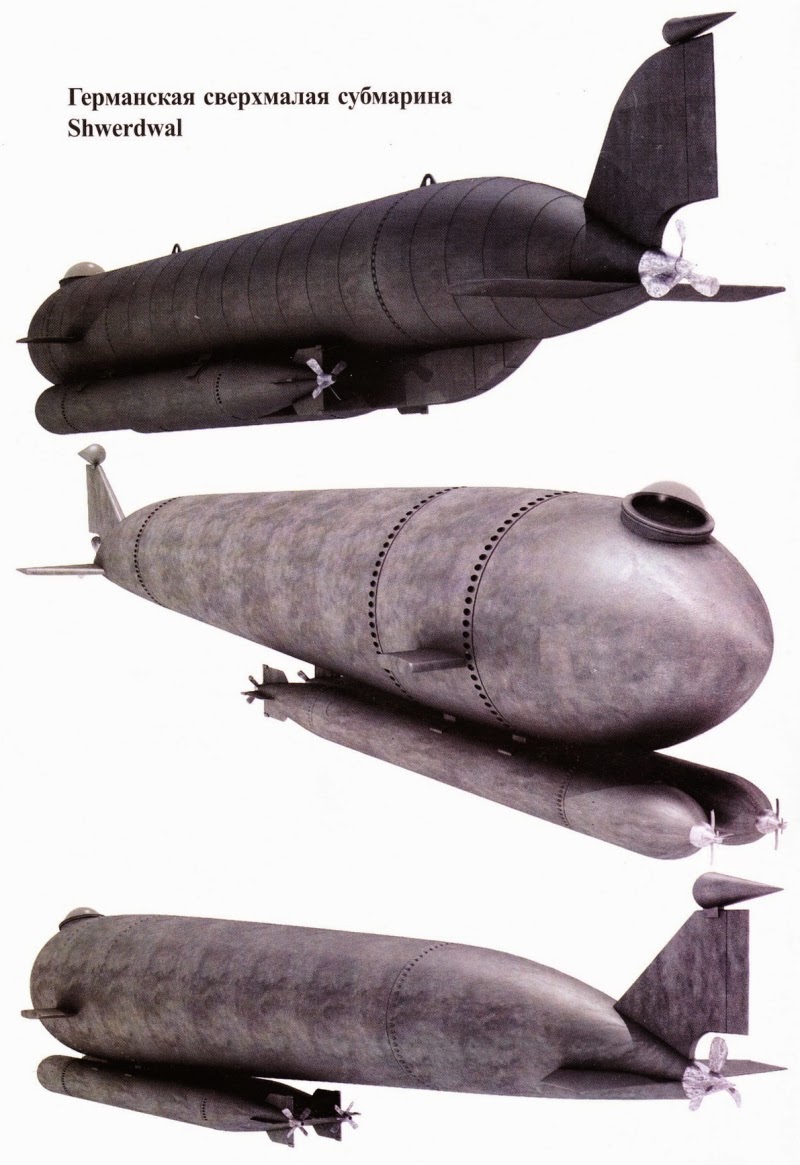 These small, special-purpose naval units, known as the K-Verbände, were established under Konteradmiral (later Vizeadmiral) Helmut Heye in April 1944, and were the nearest thing the German Navy had to a commando/SBS type force. Mention of these units generally brings to mind the one-man torpedo or midget submarine units, and indeed these formed a major part of the K-V, but there were other equally fascinating aspects to this force.

As far as the mini-subs are concerned, several types were planned and built, but in the event, none achieved any significant combat success. The Neger was a very simple device consisting of an electrically powered, manned torpedo, in which the operator sat with a flimsy plexiglass dome for protection against the sea. Below this propulsion unit was slung a live G7e torpedo. When placed into the water, the unit became invisible but for the small plexiglass dome. The unit had no capacity to submerge fully. This was a very basic, and very dangerous, piece of equipment, which was liable to become swamped, difficult to control in anything more than a moderate swell, and easily spotted by vigilant lookouts on enemy vessels. They were, however, used operationally, the first combat use being at Anzio against the Allied invasion fleet. Losses, however, were high, with only 13 returning from a total of 23 launched, and the results did not really justify their use, as not a single Allied ship was damaged.

An improved version, the Marder, was given a limited dive capability and used against the Allied invasion fleet at Normandy on 5 July 1944. A total of 26 Marder were launched, of which 15 were destroyed, for a loss rate of over 50 per cent. This time, however, two British minesweepers were sunk. Three nights later, a further attack by 21 Marder succeeded in sinking a further minesweeper and permanently disabling a light cruiser. Subsequent attacks sunk the British destroyer Quorn, as well as a small number of landing craft, transports and other auxiliary vessels. Although some successes had been achieved, they were at the cost of considerable losses. Many considered their use almost suicidal, and problems in obtaining enough volunteers began to be experienced. One Neger operator, however, Schreibermaat Walter Gerhold, was decorated with the Knight's Cross of the Iron Cross and survived the war.

More advanced designs such as the Biber, a miniature submarine carrying two external torpedoes, had even less success. In one operation in December 1944, 18 Biber set off from their base in Holland. One small ship of just less than 5,000 tons was sunk, but every Biber was lost. The Biber had a disastrous record of losses. One senior naval officer caustically commented that no opinion on their successes could be calculated, as none had ever returned from an operation. From one recovered vessel, it was discovered that petrol fumes from its engine had suffocated the crewman. Many others of those who never returned may have suffered a similar fate. The Seehunde, was a slightly more technically advanced minisubmarine, and slightly less dangerous to its operator. One even survived an attack by a British torpedo boat. Nevertheless, rewards for its efforts were scant, with only four enemy ships being sunk in well over 30 sorties by the Seehunde type of mini-submarine.

Some idea of the ineffectiveness of these weapons can be gleaned from the fact that in March 1945, from a total of 56 sorties by Biber and the newer Molch types, over 40 vessels were lost for the sinking of just 250 tons of enemy shipping.

In addition to the mini-submarines, the K-V also used Linsen, small, fast motor torpedo boats which were packed full of high explosive and propelled at top speed towards their target. Several Linsen and one control boat would be used. The Linsen operator would dive overboard at the last possible moment, leaving the boat to be steered to its target by radio from the control boat, the explosives packed into its hull detonating when it hit its target. The Linsen crewmen would then be picked up by the control boat. These motor boats were to be used against ships and targets such as bridges, etc. These boats were used operationally but did not achieve many successes, a large number of the boats being lost to mechanical problems or to heavy seas long before the target areas were reached. Like the Neger operators, personnel using these boats stood a very high chance of being killed or seriously wounded.

Despite the very low success rate achieved by the Kleinkampfmittelverbände, there can be no doubting the bravery of the K-men themselves, working in tiny, cramped, primitive vessels, in freezing cold, with choking fumes and with very little prospect of survival. A special insignia, consisting of a sawfish superimposed over a knotted rope, was introduced as a decoration for the men of the Kleinkampfmittelverbände. The extreme rarity of original examples is testimony to how difficult it was 50 to earn, and perhaps also of how few survived.
Posted by Mitch Williamson at Sunday, March 08, 2015
Email ThisBlogThis!Share to TwitterShare to FacebookShare to Pinterest
Labels: Crew, U-Boat
Newer Post Older Post Home