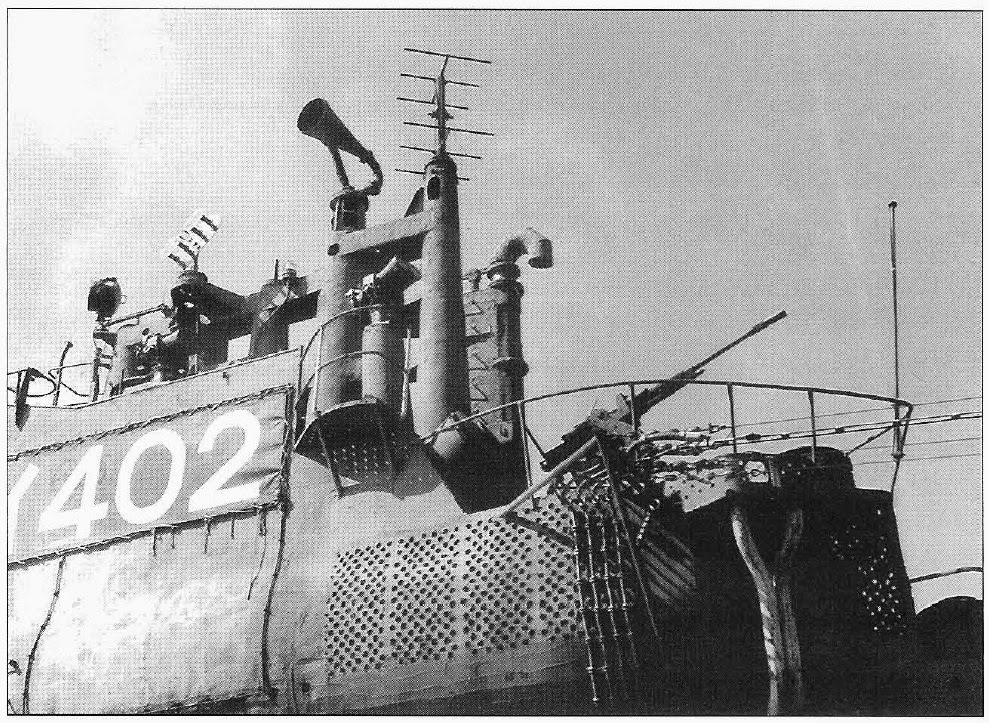 The conning tower of the STo Type boat 1-402. The boat’s Type 22 surface search radar (the funnel-like device) is evident; behind is the air warning radar. Also visible are binoculars for the bridge watch crew. On the aft part of the conning tower is a 25mm single mount.

Radar One of the Imperial Navy’s foremost shortcomings during the Pacific War was its failure to develop radar. This had a crippling effect operationally on its submarine force. The lack of an air warning radar on Japanese submarines increased their vulnerability to air attack, especially at night. This was crucial given the already excessive diving times of Japanese submarines. The Type 13 was the standard Japanese air search radar for submarines; however, it was not until April 1944 that this bulky radar was adapted to submarine use. Performance was mediocre, with the capability to detect a group of aircraft 60 miles (97km) and a single aircraft at 30 miles (48km). To detect Allied radar, Japanese submarines also employed passive measures. The E27/Type 3 radar detector was introduced well before the Japanese fitted radar to submarines; however, its reliability was suspect. Additionally, late-war Japanese submarines had their hulls and conning towers covered by an antiradar hull coating designated "LI."

The standard surface search radar was the Type 22. This set had two horn-shaped antennae, one for transmission and one for receiving. On most submarines, the Type 22 was mounted in front of the conning tower. Performance against a large surface target was reportedly in excess of 21 miles (34km), but was probably much less on a submarine where the set was mounted fairly low to the water.