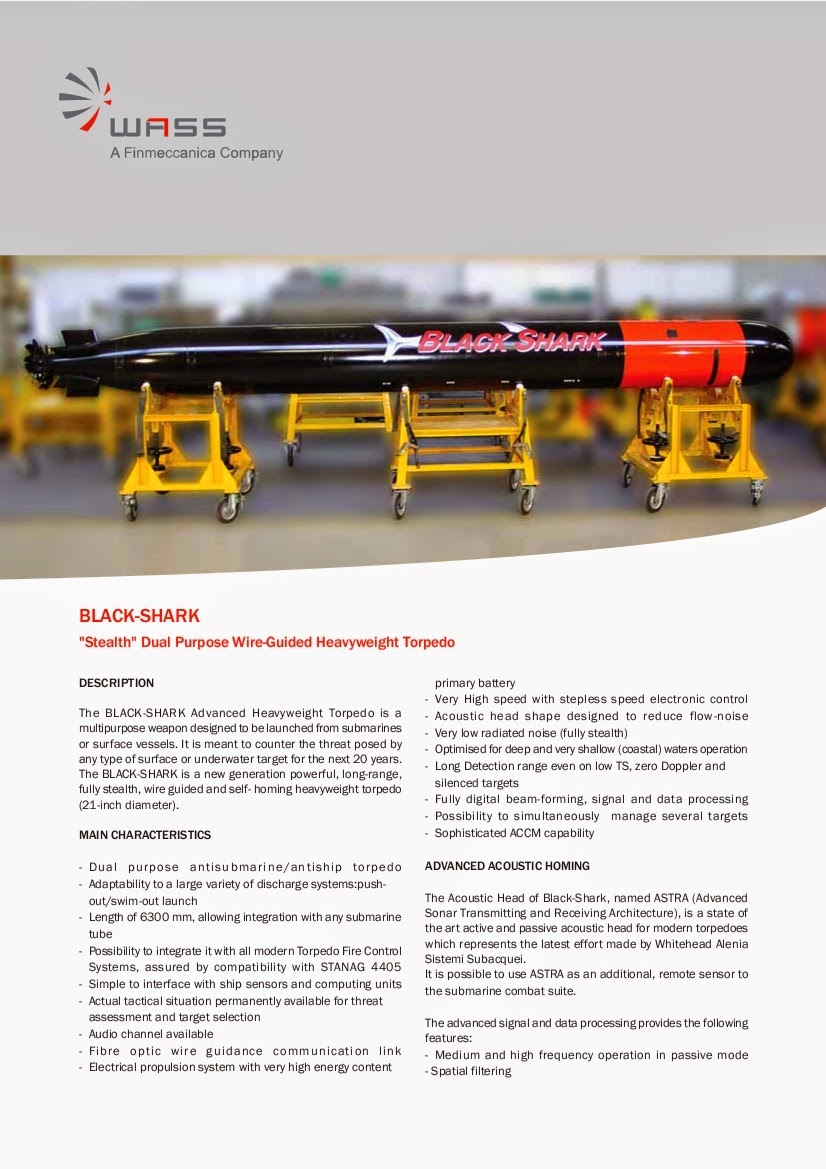 Feb 1, 2011 Christina Mackenzie  |  Defense Technology International
Torpedoes are potent weapons, if rarely used. Excluding the sinking of a South Korean ship last March by North Korea, the last torpedo used in combat was by the Royal Navy in the Falklands War, “and they used a torpedo from World War II,” says Marc Le Roy, director of BU ASM (Business Unit Armes Sous Marines), the underwater weapons business of French naval systems developer DCNS.
Nevertheless, France is investing in the development of a new generation of heavyweight torpedo, the F21, which will be the weapon of choice for its nuclear submarines over the next 30-40 years.
“France is the latest country to develop a new heavyweight torpedo,” says Le Roy. Germany and the U.S., he adds, “have made incremental improvements to existing torpedoes, whereas with the F21 we are developing a completely up-to-date product.”

The F21 is scheduled to be operational in 2016. BU ASM plans to produce 100 of the torpedoes for the French navy’s Rubis-, Barracuda- and Le Terrible-class submarines. “Because these torpedoes are designed as part of the weapon system of nuclear submarines, they need to be extremely safe,” says Le Roy. There must be zero risk of an accidental launch or explosion. DCNS has developed an important component for safe deployment: an energy pack based on an aluminium/silver oxide electric battery that needs seawater for activation—an element unlikely to be found in the submarine.
To meet submarine safety requirements, the F21 will be launched by a technique in which it is pushed out of the boat by a piston, after which a valve in the torpedo opens and lets seawater into the battery to activate it. The battery “provides high energy density and is the best-performing [type] on the market.”

The battery is sufficiently compact that the overall length of the F21—6 meters (19.6-ft.) long with a 21-in. dia.—is compatible with legacy launchers. One problem with competitive torpedoes that are equipped with older-generation batteries is that to achieve the energy for their missions and countermeasures, they “need long batteries, which add so much to their length that they no longer fit into launchers,” Le Roy says. The torpedo must also have enough energy left once it has reached its target to attack and sink it. “We are talking about high-value targets such as aircraft carriers and frigates,” he adds.

This explains the importance of the primary battery as the energy source. The U.K., Russia, U.S. and Sweden have chosen thermal systems as their energy source. France specified this electric system “because it is safe and silent,” says Loic Beaurepaire, marketing and business development manager. “In underwater missions, silence is of the utmost importance to avoid detection by the enemy,” he remarks. “This system enables a totally silent attack.”

The F21 is digital and operates in depths of 15-500 meters, which means it can be used in littoral and blue-water operations. Beaurepaire says that in shallow waters there are “parasite” sounds that confuse torpedoes, which home in on targets acoustically. “We treat the sound signals digitally with the same up-to-date processing as in modern ship sonars, which enables us to largely overcome this difficulty.”

The new torpedo weighs 1.2 tons, has a range of 50 km. (31 mi.), speed of 50 kt., and 1-hr. endurance. It can attack multiple targets and has extended fiber-optic wire guidance. DCNS says it is resistant to most countermeasures.

The warhead contains PBX B2211, a high-impulse, high-bubble-energy, insensitive explosive that conforms to NATO’s Stanag 4439 and France’s Murat (Munitions a Risques Attenues) standards. The torpedo uses an all-electric “fuse-and-slapper” detonation technology. Primarily used in missiles, the plasma-based slapper system is more stable and safer than the conventional electro-mechanical detonation systems in most torpedoes.

The torpedo configuration can be changed from a weapon to a training device, Beaurepaire says. “We just put an exercise section on it instead of an explosive one. We can also change the primary battery, providing it with a secondary battery based on lithium-ion technology, which is reusable a great number of times.”
Posted by Mitch Williamson at Sunday, March 08, 2015
Email ThisBlogThis!Share to TwitterShare to FacebookShare to Pinterest
Labels: Weapons
Newer Post Older Post Home