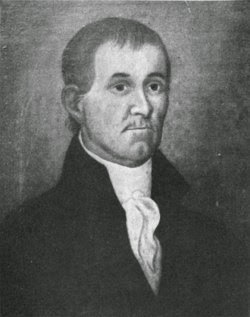 Inventor of the submarine. Connecticut. Born on 30 August 1740 in Saybrook, Connecticut, Bushnell attended Yale University from 1771 to 1775. While at college he demonstrated to skeptical instructors that gunpowder could be detonated under water. He subsequently built a man-propelled submarine that he called the American Turtle, so named because the top-shaped craft of heavy oak beams was said to look like two turtle shells joined together, with the tail end pointed downward. The submarine was unsuccessfully tried in the waters around Boston, New York, New London, and Philadelphia during the years 1776 to 1778, but the American Turtle eventually proved that it could dive, travel and navigate under water, plant a large time-charge of powder against the hull of a ship, and surface.

The submarine never sank a warship, however, primarily because no adequately skillful operator was ever found. With Sergeant Ezra Lee of the Connecticut Line at the helm, the submarine unsuccessfully attacked Admiral Richard Howe's flagship, the Eagle, in New York Harbor in 1776. Two other attacks also failed. Giving up on his submarine, Bushnell switched to developing undersea mines, attempting to blow up the British vessel Cerberus off New London in the following year. The ship's captain saw the device, however, and cut the line that tethered it in place. The mine floated to a nearby schooner, where it exploded, killing three men. Bushnell contrived various other devices to harry British shipping, and his unsuccessful floating-mine attack on the British in Philadelphia in December 1777 inspired Francis Hopkinson's poem, ``Battle of the Kegs.''

Although the public mocked Bushnell's efforts, his inventions showed more promise than anyone realized. His technical qualifications were recognized by the army, and on 2 August 1779 he was commissioned as a captain-lieutenant of the newly organized Corps of Sappers and Miners. On 8 June 1781 he was promoted to captain of the Engineers, and on 4 June 1783 he was given command of the Corps of Engineers at West Point. When that body was disbanded, Bushnell was mustered out in November 1783. He sank into obscurity after the Revolution, taking on assumed names, teaching, and practicing medicine. His place of death is unknown, but it is thought that he died in 1826.
Posted by Mitch Williamson at Sunday, March 08, 2015
Email ThisBlogThis!Share to TwitterShare to FacebookShare to Pinterest
Labels: Biography
Newer Post Older Post Home