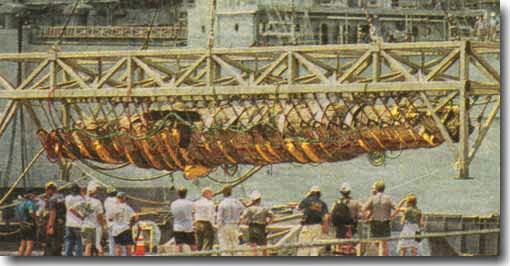 Built from steam boilers in the spring of 1863 at Mobile. Taken by rail to Charleston, S.C. Five crewmen drowned in Charleston Harbor on August 29, 1863, off James Island at the Fort Johnson wharf when it accidentally submerged with its hatches open in 42 feet of water. Was quickly raised. Horace L. Hunley and seven crewmen drowned when human error and mechanical defects caused the submarine to sink during another trial run in 56 feet of water on October 15, 1863, in Charleston Harbor. Raised and called the “Iron Coffin” because of its sinkings with loss of crews. It was the first submarine to sink an enemy warship in battle. On February 17, 1864, the CSS H. L. Hunley rammed a spar torpedo into the USS Housatonic and sank the Union warship. The CSS H. L. Hunley sank on the way back to Charleston with its commander, Lt. George E. Dixon of the 21st Ala. Volunteer Regiment, and its crew.

Some mistakenly believed the submarine jammed the nose into the hole made by the torpedo and sank. Union sailors dragged the area for 500 yards around the USS Housatonic but failed to find the CSS H. L. Hunley. After the war some erroneous report said it was about 100 feet from the USS Housatonic, with bow toward the USS Housatonic. Probably sank due to the hatch being open on its trip back to Charleston when a large wave hit. Originally thought by some to have been removed by Benjamin Maillefert for the U.S. Army Corps of Engineers along with the USS Housatonic in 1872–73. P. T. Barnum offered $100,000 for the recovery of the submarine. Searches were made for the vessel in 1876. Clive Cussler’s National Underwater and Marine Association (NUMA) with the University of South Carolina and the Institute of Archaeology and Anthropology discovered the vessel in Maffitt’s Channel on May 3, 1995, off Sullivan’s Island after years of searching. The submarine was in 28 feet of water with 3 feet of silt over it. It was tilted at a 45° angle about 4 miles outside of Charleston. There was some controversy regarding its prior discovery by E. Lee Spence. On June 13, 2000, divers recovered the vessel’s 17-foot long iron pole, which had carried its torpedo. Raised on August 7, 2000, amid much fanfare by the work boat Karlissa B. Straps were used to lift the vessel out of the mud. The South Carolina Institute of Archaeology and Anthropology, the U.S. National Park Service, and the nonprofit Friends of the Hunley were involved. About $17 million from public donations, the State of South Carolina, U.S. Department of Defense, and others were used to recover and restore the submarine. Hauled into Charleston to a lab in the old U.S. Navy Yard at the Warren Lasch Conservation Center. The submarine was conserved, explored, and the crewmen’s remains were removed in 2001. Among the items recovered was Lt. George E. Dixon’s lucky 1860 $20 gold piece, which had been given to him by his girlfriend, Queenie Bennett of Mobile. The gold piece had deflected a bullet at the Battle of Shiloh and probably saved Dixon’s life. A Union dog tag from Ezra Chamberlin of the 7th Conn. Regiment was also found in the submarine. Many had toured the sub in the lab, and a permanent exhibition will be set up. The recovered crew was buried amid much ceremony.