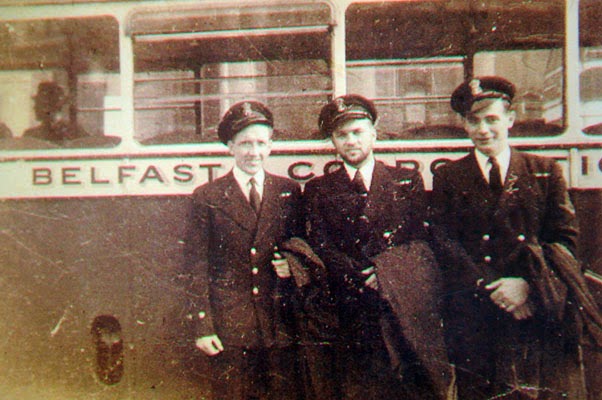 Terry Nordman (centre) is believed to be the last survioring crewman of a celebrated navy coup against a German ship which captured the public's imagination during the dark days of World War II.

VANCOUVER — Canadian seaman Terry Nordman dodged Nazi torpedoes in the North Atlantic, but his finest hour came during a little-known naval action that began on the West Coast.


The surprise seizure of the German blockade runner Weser in 1940 brought home Canada’s first prize of the Second World War and cheered a public hungry for some good news.

Nordman, who was 18 at the time, says the cargo ship’s capture likely prevented armed enemy raiders from being resupplied and wreaking even more havoc on the world’s oceans.

He says the feat was made all the more amazing because of the ad hoc way the Canadian naval force was put together.

Nordman was one of 100 green crew members aboard the navy’s Prince Robert, a hastily converted passenger liner outfitted with six-inch guns in North Vancouver.

Nevertheless, the navy pulled it off with a coup de main that made headlines across the country at the time but which has mostly been lost amid the conflict’s greater horrors.

“We didn’t want any of those ships going back to Germany,” says Nordman, 90, a quiet silver-haired gentleman who walks with the aid of a cane and has recently moved back to Vancouver.

Nordman, who may be the ship’s last surviving crewman, says the episode deserves to be remembered.

He was looking for a job on Vancouver’s Skid Row when the blue water service found him in 1940.
“I didn’t want to fight so much as I wanted three square meals a day,” the physically fit, Finnish-born Nordman says. “The only thing I’d ever done was row boats in Northern Ontario.”
The pay was $1.85 a day.

The bare-bones and understaffed Canadian navy, which was almost totally unprepared for war, was gearing up for combat as fast as it could when Nordman reported for duty in Esquimalt, B.C.
Warships were being conjured up by throwing guns on peacetime vessels such as the Prince Robert — even though it lacked the heavy construction favoured by naval architects.

It was a 6,892-ton, former passenger ship which looked like a scaled-down Queen Mary before taking on the lines of an armed cruiser.

“There was a lot of shaking every time the guns went off. It was not made for it,” Nordman says.
The shortcomings were mitigated by the presence of old salts such as Cmdr. Charles Beard, who had been with the navy several decades when put in charge.

Beard had a few tricks up his sleeve as he guided the Prince Robert on its secret mission to Mexico.
The Weser was an express German cargo ship which was well-known in Vancouver before the war.
It could do 17 knots, was 487 feet long and weighed 9,180 tons.

It had been slipping in and out of neutral ports in Central America trying to beat the British blockade, and was holed up in Manzanillo.

Naval authorities suspected it was being used to refuel German U-boats or resupply armed merchant raiders plying the Pacific Ocean.

Beard planned to lay off the coast during the day and close up at night behind a headland where he could spy on the enemy without being seen himself.

The Weser had to be secured in international waters before the Germans could wreck it with pails of gasoline placed around the ship for the purpose.

Patrol work off Manzanillo was hot and sweaty during the pitch-black nights, says Nordman.
He was on lookout on Sept. 25, 1940, when the German ship made its break.

“I noticed one part of the ocean was darker than the rest. I informed the bridge and they took over,” he says matter-of-factly.

The operation was flawless.

A single shot across the bow persuaded the Weser to halt and the Canadians quickly launched armed men in boats to overwhelm its crew.

Storming aboard with grappling hooks, the bluejackets captured 58 prisoners, 19,000 barrels of fuel oil and 15 cows.

It was quite a coup.

Nordman said German Captain H. Veit took the defeat hard on the voyage back to Canada.

“He strutted around on deck and wouldn’t talk to anyone,” he says. “We played hockey with the rest of the Germans during the day and guarded them at night with machine guns.”

A grateful nation cheered the ship’s return to Esquimalt as a White Ensign flew over the Swastika.
Prime Minister Mackenzie King sent his “hearty congratulations” and the British Admiralty signalled a job well done.

The Weser was valued at $1.5 million, but rumours of $500,000 prize money being distributed to the Robert’s crew never materialized.

“That was a lot of B.S.,” says Nordman. “As soon as the prisoners were dropped off, we hurried south again.”

The Weser was renamed Vancouver Island and put to work carrying vital war supplies to England. She was sunk by German torpedoes in 1941.

The Prince Robert ended her days as a luxury Italian cruise liner.

Nordman spent much of the war as a sonar operator aboard corvettes guarding convoys.

He saw terrible things such as severely burned men crying in the water after their tanker had sunk.

“It was a shocking thing. All you heard was screams. We left them behind for someone else to pick up. Our job was to get the sub, not the men. You never forget that,” he says.

After the war, he founded a sauna company in Montreal and sold real estate in the Bahamas.

He is paid a $1,200 monthly naval pension and has a daughter in New Westminster, B.C.

He says there were more fireworks elsewhere in the war, but nothing compares to the textbook triumph on his maiden voyage aboard the Prince Robert.