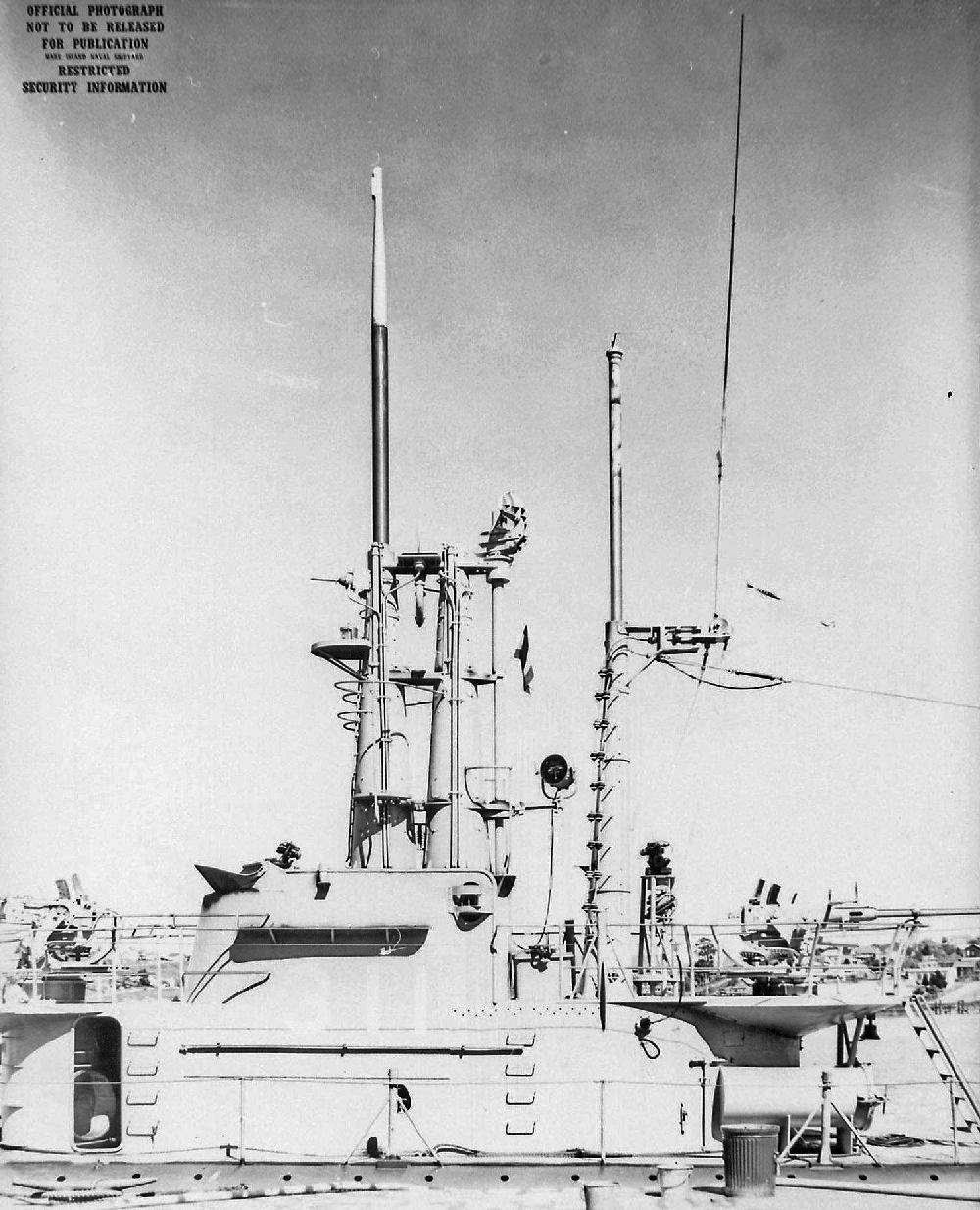 Photo of port side of sail and antenna arrangement of Archerfish (SS-311) at Mare Island on 25 March 1952.

The bridge structure or fairwater, now usually termed the 'sail', (called the fin by the Royal Navy) is a special case in surface seakeeping. If it is dry enough, even a submarine with relatively low freeboard can operate on the surface; hence the significance of the changes in the American 'S' class in 1917-18. The earliest submarines were provided only with small armoured' watertight conning towers, in which their commanders could stand when they were submerged. Before the development of periscopes, the only view was from ports in this tower, and it was standard practice for the submarine to rise intermittently to just awash during its approach to the target. Surface performance was another matter. At first, there were no permanent bridges, and orders had to be shouted down an open conning tower hatch. The conning towers of early British submarines were so short that high waves could wash over them, swamping the boat.

It was natural for the early periscopes to pass through the conning towers into the control rooms below. But the British view was that the conning tower per se was no more than a passageway between the control room and what became a permanent bridge. There was little point in passing the periscopes through this relatively narrow tube. The first British submarine with this type of conning tower was C-19 in 1909, and this system persisted in all later boats. A recent British official historian observed that there was a conflict between a desire to increase the length of periscopes (to increase periscope depth for safety) and the need to be able to dive in shallow water, which in turn made a low silhouette attractive. Typically British conning towers had upper and lower watertight hatches, to provide extra security against flooding by wave breaking over the bridge.

The US Navy followed a rather different path. From the large V-4 on (1927), it placed periscope eyepieces in large conning towers rather than in the control room located in the pressure hull proper. Total periscope length was fixed by the height of the structure above the bridge, which determined in part the size of the silhouette the submarine presented on the surface; when housed, the lower end of the periscope was nearly at the keel. However, periscope depth was determined by the height of the eyepiece above the keel; by placing its eyepieces in the conning tower, the US Navy (and other navies employing similar configurations) gained about 10ft. They also gained in periscope height above water, hence range, when the periscope was used for look-out on the surface. In most US fleet type submarines, the conning tower contained an attack centre from which the captain operated, although most of the ship controls were in the compartment below. This separation led to later demands for amalgamation of the attack centre and the control room.

The separate conning tower's great disadvantage was its bulk adding resistance underwater. That was no great problem as long as high underwater speed was not demanded, but in 1946 the US Navy began to develop a fast (underwater) submarine, which became the Tang. One of the first measures taken was to forego the conventional conning tower, to reduce the bulk of the fairwater enclosing the periscopes, snorkel, and surface bridge. Perhaps surprisingly, the loss of periscope depth was not universally accepted, and both Darler (diesel) and Seawall (nuclear) of the mid-1950s had small conning towers justified entirely in terms of increased periscope depth. Later designs lacked conning towers; underwater speed was far too important.

Conning tower design is only one factor affecting another important aspect of submarine design, performance near (but by no means at) the surface. The classic problem of a submarine at very shallow depth is that sudden changes in trim (as when a torpedo is fired) or even violent waves can so change its buoyancy as to cause it to surface inadvertently, to broach, and 0 to expo e itself. The entire issue might be thought obsolete in an era of nuclear submarine, but that is so far not the case that attempts to eliminate the ail (as a major source of underwater drag) in US submarines have generally died in the face of requirements for periscope-depth performance.

Historically, depth keeping was essential if an attacking submarine was to be able to make periodic periscope observations of its target; the periscope was the only effective attack en or. Then near-surface depth keeping became important for snorkelling; the snorkel had to be kept out of the water, but not too far out (ie too detectable). For example, at least in early installations, each time a wave shut down the snorkel air intake the diesels would begin to suck air out of the boat so violently that air pressure would drop rapidly. Nuclear propulsion solved that problem, and it might be argued that the periscope is of little value in submarine v submarine duels. But this is not the only important current submarine role. For instance, the covertness of the submarine makes it an ideal platform for collecting electronic and even photographic intelligence, for both of which it mu t project sensors out of the water. The public discussion of US submarine intelligence mission into Soviet fleet operating areas (using Sturgeon class boats) can be read alongside statements that this design shows a much taller sail than its predecessors, a feature which would keep the submarine deeper under water when at periscope depth, and thus would make it less responsive to surface wave motion.
Posted by Mitch Williamson at Friday, March 06, 2015
Email ThisBlogThis!Share to TwitterShare to FacebookShare to Pinterest
Labels: Technical
Newer Post Older Post Home