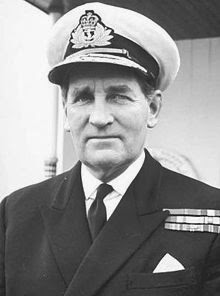 Vice-Admiral Sir Ian McGeoch, who has died aged 93, was a wartime submarine ace and a serial escaper after being captured by the Germans in the Mediterranean in 1943.

McGeoch's most famous exploits in submarines came in the period between November 1942 and April 1943. On his first war patrol he was deployed off Naples to ambush any Italian battleship which might threaten the Allied landings in North Africa.

He hunted and missed a German U-boat, but when an anti-submarine schooner was sighted the same afternoon McGeoch surfaced and fired a few shots to persuade the crew to abandon ship; he then boarded and searched her before setting her on fire. He allowed an armed merchant cruiser to pass unmolested, but the next day another U-boat proved too tempting to resist - it was not an easy attack, however, and McGeoch's torpedoes missed their target.

A day later - determined not to waste his one remaining torpedo - McGeoch took Splendid inshore, where he could see two merchant ships under the escort of two destroyers. Picking the larger and more modern of the destroyers, he scored a direct hit.

Returning to Malta, McGeoch saw an RAF Wellington attack a convoy and disable a merchantman; he surfaced and shelled the straggler until she sank.

What the official record described as an "exhilarating" patrol was further enlivened the following night, when Splendid was forced to turn and dive to avoid the tracks of two torpedoes.

On his second patrol McGeoch and Splendid made a nuisance of themselves on the Axis convoy routes to North Africa, sinking another destroyer. On his third and fourth patrols he sank two anti-submarine vessels and another 19,000 tons of shipping. He was awarded a DSO.

Later McGeoch spotted a 10,000-ton tanker with a powerful escort off Sicily. The conditions were as unpromising as they could be (a flat calm and a bright sun), but he pressed home his attack to within 600 yards and "made a job of it" with three torpedoes. Two days later he sank a 3,000-ton tanker.

In April 1943 McGeoch was awarded a DSC for his bravery and skill in successive submarine patrols, but on April 21 his luck turned. He was in Splendid three miles off the south-east coast of Capri when he was puzzled to see through his periscope a British destroyer; it was in fact a British-built warship, formerly the Greek destroyer Vasilefs Georgios, but now under the German swastika as Hermes.

In good asdic conditions Hermes dropped three accurate patterns of depth charges and Splendid sank to the seabed, where the depth gauge stopped at 500ft. McGeoch blew all his air tanks to raise his submarine to the surface; the crew abandoned the boat through the gun and conning tower hatches while Hermes made direct hits with her main armament, killing 18 of Splendid's 48-man crew.

McGeoch himself was wounded, in the right eye, but stayed in the boat until he was sure that there was no one left alive and that it would sink before the enemy could board it. The entire action was over in 12 minutes.

As McGeoch was hauled from the water into a German motorboat he heard a guttural voice delivering the classic line "For you the war is over", and he thought to himself "No, it bloody well isn't". Thus began a year-long odyssey to reach Britain.

Although now blind in one eye, McGeoch made several escape attempts: he attempted to dig, during the siesta hours, a tunnel from an Italian hospital where he was being treated. He jumped from a train when he was being moved between camps, but was recaptured. After being taken to Rome for interrogation, he leapt from a moving car and made a vain attempt to enter the Vatican.

Later, after the Italian armistice, he was promised repatriation, but the train in which he was travelling was commandeered by the Germans; McGeoch was taken to a prison hospital, from which he simply walked away, eventually crossing the border into Switzerland after a 400-mile hike.

He chose Switzerland - more distant than the Allied front line - because he wanted medical attention, and he was conscious while Professor Adolphe Franceschetti used an electromagnet to draw a jagged sliver of rusty steel from his blind eye.

He was also taken with what he called "the silken dalliance" of Geneva, but was impatient to get home and obtained false papers before walking into France in January 1944. Making contact with the Resistance, he travelled westwards by train and car, then skied across the Pyrenees and into temporary internment in Spain.

From Gibraltar he took passage in the dummy battleship Centurion, and his arrival in Britain was announced to the Resistance by the BBC with the cryptic words le tabac du Petit Pierre est dans la boîte. His reunion with his wife and the child he had not yet seen was delayed until two days later by a debriefing with MI9. He was mentioned in dispatches for his successful escape.

Ian Lachlan Mackay McGeoch was born on March 26 1914 at Helensburgh, where he was inspired to pursue a life at sea by messing about in boats on the Firth of Clyde. He was educated at Pangbourne, and entered the Royal Navy as a special entry cadet in 1931.

In 1933 he served as a midshipman in the battleship Royal Oak, the destroyer Boadicea and the cruiser Devonshire, but six years later began to specialise in submarines.

On the outbreak of war McGeoch was third hand in the submarine Clyde. He passed the perisher in 1940 and was sent to Malta as spare commanding officer. He commanded Splendid during the Allied landings in North Africa (Operation Torch) before embarking on the period in which he became a submarine ace.

After his escape McGeoch attended the naval staff course in 1944 and was staff officer operations in the 4th Cruiser Squadron of the British Pacific Fleet.

In 1946-47 he commanded the frigate Fernie until being promoted commander and sent to work in the operations division of the Admiralty. In 1949 he commanded the 4th Submarine Division in Sydney.

He was naval liaison officer to RAF Coastal Command in 1955-56, Captain 3rd Submarine Squadron in 1957-58, then spent two years as director of the Underwater Warfare Division in the Admiralty. After a year as a student at the Imperial Defence College, McGeoch commanded the cruiser Lion from 1962 to 1964.

Promoted to admiral, he was successively Admiral President of the Royal Naval College, Greenwich, Flag Officer Submarines, and Flag Officer Scotland and Northern Ireland. He was appointed CB in 1966 and KCB in 1969.

After retiring in 1970 McGeoch went to Edinburgh University to study Social Sciences, and in 1975 was awarded an MPhil for his study of the origins, procurement and effect of the Polaris project.

From 1972 to 1980 he was editor of The Naval Review, and contributed to many other service journals. He collaborated with General Sir John Hackett and other senior Nato officers in producing two editions of The Third World War (1978 and 1982), which predicted how a future war might be fought.

McGeoch wrote a wartime memoir, An Affair of Chances: a Submariner's Odyssey, 1939-44 (1991), and The Princely Sailor: Mountbatten of Burma (1996), an assessment of the service career of a leader with whom McGeoch had several times served and whom he had always admired.

Interested in all maritime affairs, but especially in safety at sea, McGeoch took an active interest in all his many nautical associations, including the Royal Institute of Navigation, the Nautical Institute and the Honourable Company of Master Mariners.

He was a member of the Queen's Body Guard for Scotland, the Royal Company of Archers and of the Royal Yacht Squadron.

Ian McGeoch died on August 12, 2007. He married, in 1937, Eleanor Somers Farrie (whom he always called Somers); she survives him with their two sons and two daughters.
Posted by Mitch Williamson at Sunday, March 08, 2015
Email ThisBlogThis!Share to TwitterShare to FacebookShare to Pinterest
Labels: Biography
Newer Post Older Post Home