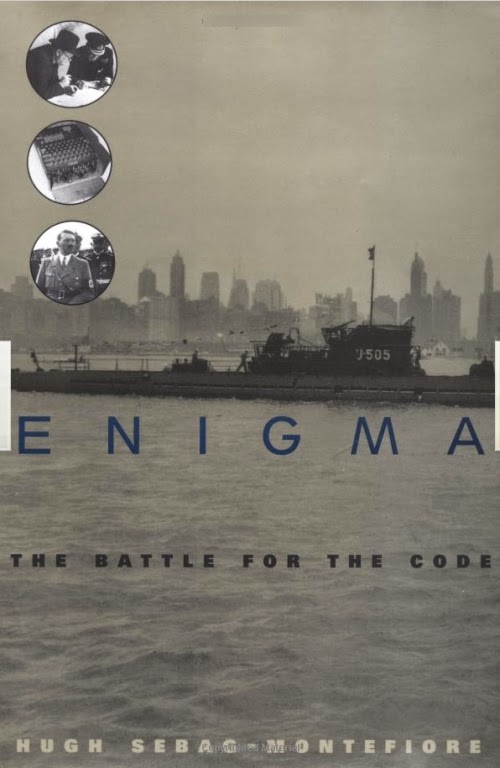 Few of the great espionage successes of the twentieth century were engineered by dashing, James Bond-type agents. Rather, many of the "heroes" of spying were anonymous people performing seemingly tedious tasks of gathering countless bits of information, analyzing them, and trying to assemble coherent conclusions from them. Sebag-Montefiore is an attorney and journalist. The key players in this saga are not the stuff of which romantic action thrillers are made. Still, the story itself, describing the breaking of the German naval code during World War II, is both engrossing and exciting. Much of the information presented here is based on recently declassified documents. The parade of characters includes ordinary seamen, double agents, and technical experts who manage to^B decipher what seems indecipherable, even to some of their peers. The result is a real-life thriller that should entice historians, fans of the spy genre, and ordinary readers who appreciate a tense, dramatic, and superbly told story. Jay Freeman
Copyright © American Library Association. All rights reserved --This text refers to an out of print or unavailable edition of this title.

In a crowd of books dealing with the Allied breaking of the World War II German cipher machine Enigma, Hugh Sebag-Montifiore has scored a scoop. The original 1931 solution to Enigma depended on information sold by a German cryptographic employee. In the course of my own researches on code-breaking, I had learned his name (Hans Thilo Schmidt), his Nazi Party number (738,736) and that he was the brother of a renowned panzer general (Rudolf Schmidt). But neither I nor later authors had gone beyond this point. Gestapo records of his arrest had vanished, files of the People's Court which would have tried him, had been destroyed, the name was common, and the events were well over half a century old. It seemed impossible to learn any more about the World War II era's most important spy-more important than Richard Sorge, more important than Cicero, more important to that conflict than even the atomic spies.
Sebag-Montifiore drove beyond the obstacles to find Schmidt's daughter. She depicted an affectionate father whose sife's family business had failed in the great inflation of 1924, who seduced one housemaid after another, who always needed money. She told of seeing him after his arrest by the Gestapo, of giving him cyanide pills, of identifying his body, of his burial in an unmarked grave next to his parents'. Sebag-Montifiore has fleshed out a name, and we historians of the intelligence world are grateful.
The bulk of the book recounts British naval actions mounted to seize the documents that permitted them to set about solving the more complicated Kriegsmarine version of the Enigma. Some of these sagas have been sung before. But not all have. Many new British and American documents have been declassified in recent years, and Sebag-Montifiore, a British journalist, has a remarkable talent in finding survivors. He has used both sources to tell new tales and to add to the old.
Take, for example, the tale of HMS Petard. Its captain wanted desperately to capture a U-boat and seize its Enigma-not realizing that its associated keying papers were more important than the machine itself, whose innards the Allies had long since reconstructed. The destroyer forced U-559 to the surface off Haifa. Its crew abandoned her, and a Royal Navy officer and two seamen swam to enter her and rescue the Enigma and any papers. They managed to send up valuable papers before the submarine sank suddenly, taking them with her. The papers were sent to the British code-breaking establishment at Bletchley Park, a country mansion northwest of London. There British cryptanalysts, who had not been able to crack U-boat Enigma messages for most of 1942, started reading them again.
Such details have already been told. Sebag-Montifiore adds what was happening in U559 while Petard was depth charging it-carbon monoxide made the crew lightheaded, two members panicked-though unfortunately he does not cite any sources for this. He provides more details on the heroism of the British sailors and tells about King George VI decorating a survivor. So although he does not alter our knowledge of the events in any significant way, he does humanize them more.
He also enlarges the story by telling what was happening on the spy front, how the Germans were led to Schmidt, how they failed to learn of early Polish and French solutions to the Enigma, how a U.S. task force also captured a submarine-the U505, now at the Chicago Museum of Science and Industry. He rightly asserts that Sublieutenant David Balme, whose entering the surfaced U-110 to grab and Enigma perhaps inspired the recent movie "U-571," should have been awarded the George Cross. Six appendixes give technical details.
The books content exceeds its form. It is adequately but not elegantly written. Too many errors of detail and grammar pock it, and the author is prone to clich?. The book's chief merit lies in its new information, though it lacks a summary of the vlaue of the cryptanalysts' work. In addition, a paragraph or two fitting the code battle of the Atlantic into the Allies' great crypologic victory of World War II, which shortened that conflict, would have helped. But the book is superior to the others on its subject. An in a way Sebag-Montifiore is the right man to have written it. His great-great-grandfather once owned Bletchley Park.
--The Washington Post

--This text refers to an out of print or unavailable edition of this title.

From the Inside Flap

Winston Churchill called the cracking of the German Enigma code "the secret weapon that won the war." Now, for the first time, Hugh Sebag-Montefiore reveals the complete story of the breaking of the code by the Allies–the breakthrough that played a crucial role in the outcome of World War II. Until recently, most historians exclusively credited the brilliant mathematicians and professors at Bletchley Park–Britain’s famous World War II counterintelligence station–for breaking the elusive Enigma code. But as this spellbinding narrative recounts, while Bletchley stars such as Alan Turing and Harry Hinsley made outstanding contributions, the critical breaking of the code depended on the work of a much larger group of heroes, most of them unsung.
Masterfully told and engagingly written, Enigma not only presents fascinating new details about the genesis of the code and the secret work at Bletchley but also tells the hair-raising stories of those who selflessly put their lives on the line to provide the codebreakers with the materials they needed. We get a compelling glimpse of the daring exploits of secret agents and spies, naval officers and ordinary seamen–the courageous men and women who risked their lives, and in some cases lost them, snatching the vital codebooks from under the noses of Nazi officials and from sinking German ships and submarines.
From Hans Thilo Schmidt, the German who gave the Allies their first clues on how to break Enigma, to Lieutenant Commander Mark Thornton, who masterminded the capture of codebooks from a German U-boat, Enigma deftly delivers sharply etched portraits of the many heroic but hitherto unknown British and American sailors without whose bravery Enigma would never have been broken.
As the story unfolds, many of the last surviving witnesses to the Enigma drama–some of them speaking on record for the first time–provide unforgettable firsthand accounts, vividly reconstructing their daring exploits. Sebag-Montefiore introduces us to the head of French counterintelligence, who contributes details of the spying and double-crossing that took place in the race to break the Enigma code and discloses little-known facts about how the Poles first cracked the Luftwaffe’s version of the code and then managed to pass it along to the British.
Based in part on documents recently unearthed from American and British archives–including previously confidential government files–and in part on several surviving witnesses to the saga, Enigma tells the stunning story of the brilliant piece of decryption that changed history. --This text refers to an out of print or unavailable edition of this title.

From the Back Cover

"cracking stuff . . . vivid and hitherto unknown details."–Sunday Times (London)The complete untold story of the cracking of the infamous Nazi code
Most histories of the cracking of the elusive Enigma code focus on the work done by the codebreakers at Bletchley Park, Britain’s famous World War II counterintelligence station. In this fascinating account, however, we are told, for the first time, the hair-raising stories of the heroic British and American sailors, spies, and secret agents who put their lives on the line to provide the codebreakers with the materials they needed. Noted British journalist Hugh Sebag-Montefiore tracked down many of the surviving players in the Enigma drama, and these witnesses–some of them speaking on record for the first time–provide unforgettable firsthand accounts of the courageous men and women who faced death in order to capture vital codebooks from sinking ships and snatch them from under the noses of Nazi officials. In addition to these gripping stories, we learn fascinating new details about the genesis of the code and the feverish activities at Bletchley. Enigma is a spellbinding account of the brilliant feat of decryption that turned the tide of World War II. --This text refers to an out of print or unavailable edition of this title.

HUGH SEBAG-MONTEFIORE is an attorney and journalist who has written for numerous British newspapers, including the Sunday times, the Sunday Telegraph, and the Observer. His family owned Bletchley Park before it was sold to the British government in the late 1930s. He lives in London.
Posted by Mitch Williamson at Friday, March 06, 2015
Email ThisBlogThis!Share to TwitterShare to FacebookShare to Pinterest
Labels: Book, Intell
Newer Post Older Post Home