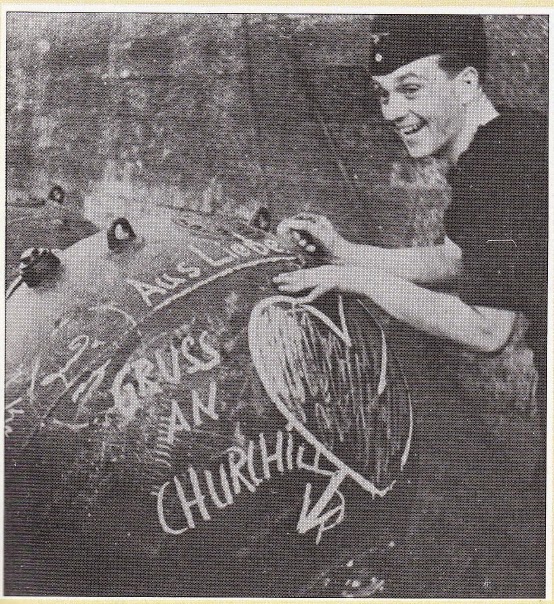 A German sailor inscribes his mine with a suitably facetious dedication. German minelaying was to cause British submarines much inconvenience in northern waters, but German surface vessels proved unable to defeat the underwater threat. 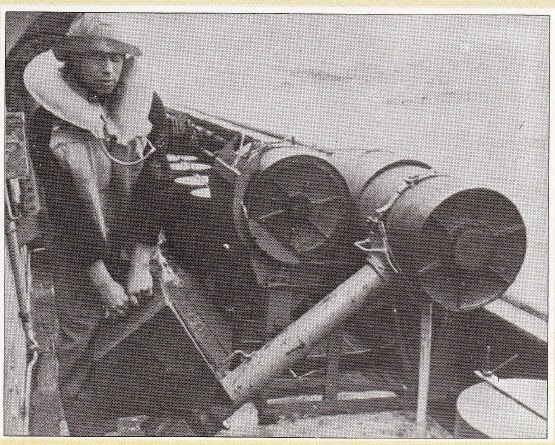 Depth charges ready for action aboard a German escort. As the German army was steadily pushed back by the Russians, so control of the Baltic coast assumed greater importance and the Germans were faced with an increasingly effective Soviet submarine fleet.

Of the Axis powers only Italy had devoted any serious effort to anti-submarine warfare, and so Allied submarines were to face tough opposition in the Mediterranean. By contrast, German and Japanese ASW preparation was weak and. Japan's maritime empire was to pay dearly for this error.

It was fortunate for the Allies that the major enemy powers had not put as much effort into their prewar ASW preparations as into their submarine arms. As far as the British (at least) were concerned, this favourable balance was somewhat offset either by having to operate in poor 'submarine country' such as the North Sea and the Baltic, or initially being obliged to use unsuitable submarines such as the 'O' class boats in Mediterranean waters. To illustrate the former point, the first three British submarine losses attributable to enemy action all occurred in the shallow Heligoland Bight within the space of only three days. The German ships involved were non-specialist auxiliaries, and their lack of sophisticated gear was compensated by the initial failure of the British to appreciate the dangers of operating in such areas. German surface ships were to enjoy little further success in North European waters and it was in the Mediterranean that the British suffered by far the greater number of their losses. The much maligned Italian navy had developed excellent ASW ships in their 'torpedo boats' which, like similarly-categorized German vessels, were really light destroyers. Both they and defensive minefields were used imaginatively, accounting between them for possibly 39 British boats. Interestingly, only four boats were officially listed as lost to enemy submarine action, suggesting far better discipline in surface navigation than that common in the enemy's boats. The end of the Mediterranean war virtually marked the end of British submarine losses to direct enemy action.

Of those boats transferred to the Far East only two or three were destroyed directly by Japanese forces. The Germans, particularly, lacked the AS organization that was so necessary to the Allied cause: the technology, the co-operation between aircraft, carriers and escorts and, above all, the intelligence that was kept a secret so well. Paradoxically, the Germans also lacked the great convoys that proved such magnets to submarines, catalysts to activate the killing grounds where the escorts operated.

Though they could never afford to take chances with Japanese AS forces, the Americans learned early that they had nothing unusual in their armoury. With US submarines operating on the surface at night, they were open (as were those of the Germans) to radar-aided counterattack, but the Japanese kept their escorts a low priority for the equipment and airborne sets were not common before 1944.

Having early developed a radar emission detector, the Japanese were often loth to use their own radar in case their enemy might, in turn: detect them through it. The, Japanese experimented with exotica such as circling AS torpedoes and an early airborne MAD (Magnetic Anomaly Detector) but stored best with the intelligent use of standard weapons such ds deep-laid mines at strategic points and plenty of depth charges. The latter, however, were reduced in effectiveness by the building of too few escorts of too high quality.

Possibly most significant of all was the consistent over-optimism concerning sinkings of submarines by the Japanese. The Americans did nothing to contradict these, with the result that the Japanese always underestimated the weapon that was throttling them and did little to improve their measures to counter it.
Posted by Mitch Williamson at Friday, March 06, 2015
Email ThisBlogThis!Share to TwitterShare to FacebookShare to Pinterest
Labels: ASW
Newer Post Older Post Home