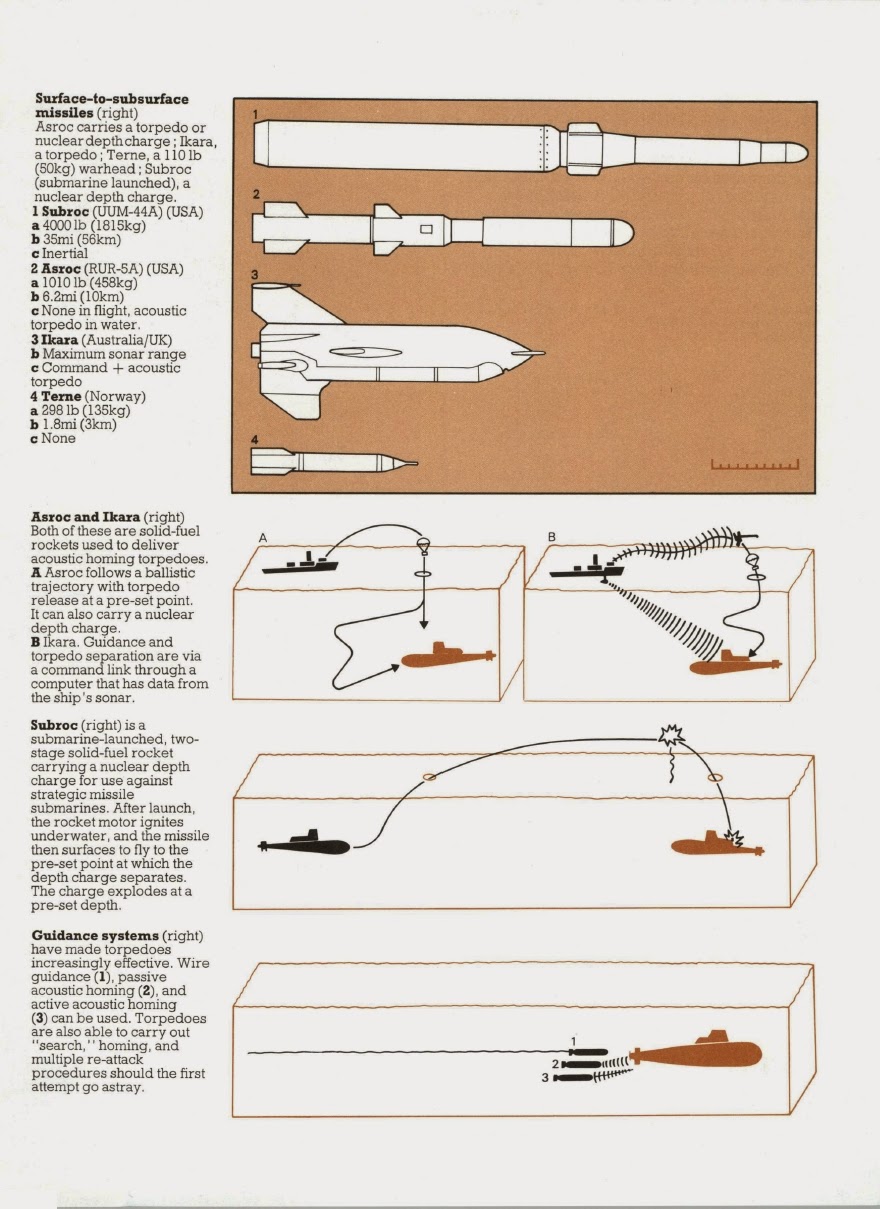 SUBROC
The SUBROC (Submarine Rocket), operational from 1964.6 This weapon provided a means of attacking targets detected by sonar at distances beyond the range of Mk 37 and Mk 45 ASTOR (nuclear) torpedoes. After being launched from a standard torpedo tube, SUBROC streaked to the surface, left the water, and traveled on a ballistic trajectory for a predetermined distance out to about 25 n. miles (46.3 km). At that point the expended rocket booster fell away and the W55 nuclear warhead re-entered the water, to detonate at a preset depth. The warhead could be selected to detonate with an explosive force of from one to five kilotons. Before launching a SUBROC the submarine had to transmit an active acoustic "ping" to determine the range to the target, initially detected by passive sonar. This use of active sonar-however brief-was eschewed by U. S. submarine captains, who throughout the Cold War embraced passive acoustic tactics.

ASROC
First deployed in 1960, the ASROC (antisubmarine rocket) is still the most important ship-launched antisubmarine weapon in the U.S. Navy’s arsenal. It also arms many antisubmarine warships of allies of the United States.

The ASROC developed from two earlier programs, Grebe and RAT (rocket assisted torpedo), which were intended to attack submarines at long range. Grebe was to be a ship-launched, remote-piloted vehicle that could transport a heavy, deep-diving Mark 41 torpedo up to 20 miles. As this was well beyond contemporary sonar range, the project was cancelled. RAT was a much simpler concept, a ballistic rocket carrying a lightweight homing torpedo and launched from rails on gunhouse sides or from a basic freestanding launcher. Its range was 1,500–5,000 yards and its performance matched that of the new SQS-4 sonar that entered service in the mid-1950s.

RAT proved too short-ranged and too inaccurate even for a homing torpedo. Its successor, the ASROC, had a range of 900 to 10,000 yards and was more accurate. Accuracy, however, required increasing the rocket’s fin area, which, in turn, reduced the box launcher’s capacity from 12 rounds, as initially conceived, to only 8 missiles. Nevertheless, the ASROC, when matched with an even longer-ranged SQS-23 sonar, proved a valuable weapon, particularly since it could carry a variety of payloads, including a nuclear depth charge.

In 1990 a new vertical launch version of the ASROC entered service. It offers still greater range (1,000 to 15,000 yards) and, since it uses the standard Mark 41 Vertical Launch System, it allows much greater flexibility in its deployment.
Posted by Mitch Williamson at Sunday, March 08, 2015
Email ThisBlogThis!Share to TwitterShare to FacebookShare to Pinterest
Labels: ASW, Weapons
Newer Post Older Post Home