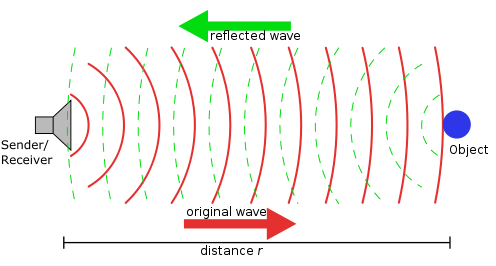 From "Anti- Submarine Detection Investigation Committee," dating to British, French, and American anti-submarine warfare research during World War I. Known as ASDIC (Admiralty's Anti-Submarine Division) in British and Commonwealth navies until the 1950s and the most important underwater detection device since the interwar period. Sonar takes two forms: active, emitting sonic impulses and measuring distance and direction through receiving their reflections; and passive, determining bearing and range through comparative analysis of received sound.

The Allied Submarine Detection Investigation Committee produced an experimental set in 1918, but the first operational units went to sea only in 1928 (aboard British A-class destroyers). All were “searchlight” units using high-frequency emissions (20–40 kilocycles). They had short ranges (to 3,500 yards) and were ineffective at speeds much above 15 knots. Such sets also had a 200-yard dead zone and slow operating rates. They determined direction but not depth. Most navies, in consequence, relied heavily on hydrophones for submarine search and used sonar primarily for attack guidance.

All Royal Navy destroyers were fitted with ASDIC during the early 1930s. This underwater detection device to locate U-boats using sound echoes was refined before and during World War II by British and other anti-Nazi scientists. Improved hydrophones had long been able to detect a U-boat's bearing.

When grouped to receive echoes of sound pulses, they also determined range. ASDIC worked by sending out acoustical pulses that echoed off hulls of U-boats, but also sometimes off the sides of whales or schools of fish. The echoes were heard by grouped hydrophones on the sending ship, so that an ASDIC screen and operator provided the escort's captain with estimated range and position of the enemy submarine. It was limited by the sounds of other ships' screws, rough seas, and onboard machinery of its host ship. Such interference enabled U-boats to hide from escorts inside the "noise barrier" created by a convoy. More importantly, even in optimum conditions early ASDIC could not determine a U-boat's depth.

British and Commonwealth ASDIC operators could locate U-boats to a distance of 2,000 meters by 1940. However, from 200 meters range to source, pulse and echo merged. That meant U-boats were lost to detection before the moment of attack, just as a destroyer closed on its position. Because forward-throwing technology for depth charges had not been developed, the explosives were dropped astern of the charging destroyer across the last known position of the U-boat. Loss of contact, stern attack, and the time it took charges to sink to explosive depth combined to permit many U-boats to escape destruction simply by turning hard away from the closing destroyer or corvette. Admiral Karl Dönitz, head of the Kriegsmarine U-boat arm, countered the threat from ASDIC by instructing U-boat captains to attack only on the surface and at night. That countermeasure was lost to U-boats once the Western Allies deployed aircraft equipped with Leigh Lights. Dönitz next ordered research into absorbent coating and rubber hull paints to reduce the ASDIC signature of his U-boats, but with little success. Similarly, release of a Pillenwerfer noise-maker only tricked inexperienced ASDIC operators. An advanced Type 147 ASDIC set was developed later in the war that tracked U-boats in three dimensions, giving readouts of bearing as well as range and depth. Note: All Western Allied navies adopted the U. S. Navy term for ASDIC in 1943: sonar.

Major wartime sonar developments attempted to address these deficiencies. Power rotation and improved displays enhanced operating rates, and streamlined steel domes raised useful search speeds. Dual-frequency sets (operating at either 14 or 30 kilocycles) enhanced ranges, and tilting transducers eliminated the dead zone. Britain also developed a specialized sonar (Type 147B) for accurate depth determination. A simultaneous line of development, the scanning sonar using an omnidirectional transmitter coupled to an array of fixed receiving transducers, offered a possible solution to the search problem. Such equipment required greater power to maintain its range but could be larger (since rotation was eliminated) and hence could operate at lower frequencies, enhancing performance.

Wartime submarines also carried sonar. Most navies relied on active sets for target detection, but Germany pursued a different course with its Gruppen-Horch-Gerät (GHG) equipment, a standard installation from 1935 on. An array of sound-receiving diaphragms on each side of the bow connected to a pulse-timing compensator provided bearings of received noise. This apparatus could detect single ships out to 16 miles and large groups to 80 miles, but the bearings it provided were insufficiently precise for accurate attacks. At short ranges, however, a supplemental swiveling hydrophone (Kristall-Basisgerät) generated bearings accurate to within 1 degree. Finally, to obtain ranges U-boats carried an active sonar (SU-Apparatus) developed from surface warship sets, although this device was rarely used because its emissions would reveal the submarine’s presence. Late-war trials, however, using GHG together with SU-Apparatus demonstrated that as few as three active impulses sufficed to determine target distance, course, and approximate speed.

Fixed-array scanning formed the basis for active sonar development after World War II, while passive systems evolved from the original German GHG. In the process the two types converged; most modern ship-mounted sonars operate in both active and passive modes, often simultaneously.

Antisubmarine Warfare
The success of sonar led in the interwar period to complacency about the need for further ASW research, since echo-ranging appeared to compromise a submarine’s ability to remain undetected. The fact that most submarine attacks had actually occurred on the surface, where sonar was irrelevant, was not taken into consideration. Submarines of World War II were faster, able to sustain greater depths, and had longer range and more powerful weapons than submarines of the previous world war.
With the beginning of World War II in September 1939, German submarines were once again deployed around Great Britain. They were not charged with destroying shipping, but rather with attacking naval vessels. Over the course of the next year, however, the rules of engagement were expanded and U-boats began concerted efforts against shipping. The Allies instituted convoy tactics at the onset of hostilities, but the fall of Norway, the Low Countries, and France in 1940 gave German U-boats better access to the Atlantic convoy lanes, something conspicuously missing during the last war. This greatly expanded the area where submarine attacks could be expected.

Increasing numbers of Allied escort vessels, long-range aircraft, and small carriers to accompany convoys infringed upon submarines’ ability to attack shipping. Depth charges and launchers became more reliable and powerful. Sonar also greatly improved, and was ultimately able to determine a submarine’s approximate bearing and depth. Such information could be exploited by the newly invented ahead-throwing weapons, the hedgehog and squid. Airborne ordnance, including sonobuoys, homing torpedoes, and devices such as the magnetic anomaly detector (MAD), were becoming commonplace.

Radar, both on surface ships and in aircraft, proved the most important ASW device of the war; radio direction finding (HF/DF) was also extremely important against German submarines. Decoded intelligence also played a major role in the defeat of the U-boats. Whole convoys could be routed around known German wolf packs, while hunter-killer groups composed of escort carriers, destroyers, and destroyer escorts could intercept and sink U-boats. Germany developed countermeasures, but the sheer scale of Allied saturation techniques, combined with the extraordinary production of shipping, made it very difficult for diesel submarines to prosecute the war.

In the Pacific, American submarines waged an even more destructive war against Japanese shipping. Japanese ASW was markedly inferior to that of the Allies, partly as a result of deeply ingrained doctrine that submarines were fleet vessels and deployed only against other naval ships, not merchant ships. Consequently, the Japanese navy had few ASW measures to protect shipping in place before their 7 December 1941 attack on Pearl Harbor.