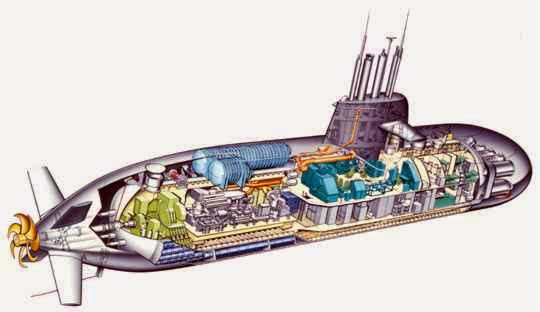 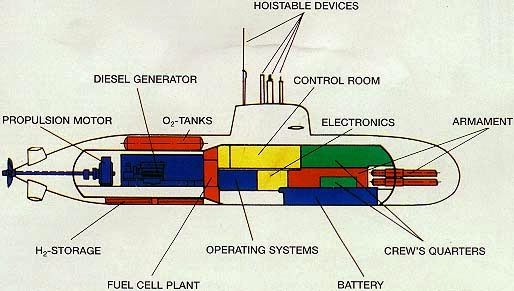 The U212 submarine is capable of long-distance submerged passage to the area of operation. The German Navy has ordered four of the submarines.

The Type 212 is being constructed by Howaldtswerke-Deutsche Werft GmbH (HDW) of Kiel and Thyssen Nordseewerke GmbH (TNSW) of Enden. HDW is responsible for the bow sections and TNSW for the stern section. HDW is assembling the first and third vessels, TNSW the second and fourth. U31, the first of class, was launched in March 2002 and commissioned in October 2005.

The propulsion system combines a conventional system consisting of a diesel generator with a lead acid battery, and an air-independent propulsion (AIP) system, used for silent slow cruising, with a fuel cell equipped with oxygen and hydrogen storage. The system consists of nine PEM (polymer electrolyte membrane) fuel cells, providing between 30kW and 50kW each.

For higher speeds, connection is made to the high-performance lead acid battery. An MTU 16V-396 diesel engine powers the generator from Piller GmbH for charging the battery installed on the lower of the two decks at the forward section of the submarine.

The diesel generator plant is mounted on a swinging deck platform with double elastic mounts for noise and vibration isolation. The propeller motor is directly coupled to the seven-bladed screwback propeller.

What has made a major difference to the SSK in recent years has been the emergence of workable AIP systems. The threat from maritime patrol aircraft is now so severe that in a hostile environment (eg, the North Norwegian Sea or the Mediterranean) an SSK cannot afford to use her schnorkel for more than 20 minutes. What is known as the submarine's discretion- rate, the period between battery-chargings, must be extended if the submarine is to regain the advantage. The purpose of AIP systems is to 'float the load' on the batteries, using the AIP system to run the 'hotel services' such as air-conditioning, hot water, auxiliary electrical power, etc, and so keep the batteries fully charged for any emergency.

THE AIP SYSTEM
During World War II the Kriegsmarine had experimented with a closed-cycle diesel system as an alternative to the Walter perhydrol-fuelled turbine. Postwar, the Americans and British experimented with high-test peroxide, but the Soviet Navy was more impressed with the Kreislauf system, and designed the Project 615 'Quebec' class coastal submarines around the concept. What the Soviets called a 'single propulsion system' ran submerged on an internal supply of liquid oxygen (LOX). The oxygen was added after the exhaust gases were filtered through a lime-based chemical absorbent. The boat could also run its Kreislauf diesel in the normal way, using a schnorkel.

The 'Quebec' had three engines, a 32D 900bhp diesel on the centre shaft and two M-50P 700bhp diesels on the outer shafts. In addition a l00hp 'creep' motor was coupled to the centre shaft and a back-up diesel-generator aft. The boat could be run at slow speed using the centreline diesel only. Soviet records suggest that experiments had started before 1941, probably with the small coastal boat M.92, and other closed-cycle designs were prepared after the 'Quebec'. Because LOX cannot be stored for any great length of time these 467-tonne (460-ton) boats could not operate far from a base. It was also a dangerous system; at least seven suffered explosions, and one of these, M.256, sank after being flooded during firefighting efforts. One boat with the Walter turbine AIP system was built, the 965-tonne (950-ton) Project 617 S.99, known to NATO as the 'Whale' type. The 5.99 made 315 dives using her Walter system, in 1956-9, but in May 1959 she was badly damaged by an explosion, and was never repaired. After these boats were decommissioned in the early 1960s interest in AIP lapsed, but recently the Russian Rubin Bureau announced that it can offer an AIP system for the new 'Amur' type SSK. Information released shows that it is a fuel-cell system (see below).

The most successful AIP system so far is the Stirling engine. Developed from a patent dating back to 1816, the Stirling cycle burns diesel fuel in pure oxygen, in a pressure vessel. The Swedish submarine builders Kockums AB of Malmö own the rights to the Stirling engine, and tested its V4-275R 75kW engine in the serving submarine Nacken. This proved successful, with less vibration than a conventional diesel-generator, and considerably lower noise levels. In fact it is possible to conduct a conversation while standing alongside a running Stirling engine. Since then the A 19 type 'Gotland' class have been built from the outset with Stirling engines, and the system has been evaluated by a number of navies. Despite rumours of submarines running entirely on four Stirling engines, Kockums denies this, pointing out that the amount of LOX required would be impossible to fit into the submarine's hull.

The German Navy followed a different route, funding Siemens and HDW in the development of a Proton Exchange Membrane (PEM) fuel cell capable of generating 40kW. As with the Stirling principle, the idea is an old one, dating back to 1839. In essence a fuel-cell reverses the process of electrolysis, using a chemical reaction to combine hydrogen and oxygen, thereby producing electrical energy, heat and water. The heart of the PEM system is a solid polymer electrolyte in the form of an ion exchange membrane in contract with a platinum catalyst and carbon paper electrodes. The membrane is positioned between the fluid flow field and the cooling units in such a manner that hydrogen ions pass through it and combine with hydrogen anions. As long as hydrogen and oxygen are supplied the fuel cell will continue to produce power.

A single fuel cell cannot produce more than 1.48V and therefore several must be stacked to form a module. The main drawback to the system is the cost of materials, and HD W has so far not offered it for export. The Federal German Navy tested a lOOkW prototype installation in the old Type 205 boat U.I, and the Type 212 boats currently under construction will have a 400kW version.

After the fuel cell trials the U.I was made available by the Navy to TNSW for trials of a closed-cycle diesel AIP system (CCD). This has the advantage of being simple, the most complex part being the water absorption system developed by Cosworth Engineering. The engine exhaust gas is 'scrubbed' with water to remove the carbon dioxide, and in the same process the water vapour is condensed. Surplus carbon dioxide is eliminated by adding a small quantity of argon gas. The great virtue of the CCD system is its use of the same diesel for schnorkelling or as an AIP unit, a great saving in cost. The system is being marketed by TNSW and RDM (as the Spectre system). The TNSW trials with U.I had the rare benefit of comparing like with like: both the fuel cell and the CCD being tested in the same hull.

The only other AIP system available is the French (Module d'Energie Sous-Marin Autonome [MESMA]) system, which uses an oxygen-ethanol fuelled steam turbine. Conceived in the early 1980s by the Bertin company, it was taken up by DCN, the French Navy's design and procurement bureau, in collaboration with Empresa National Bazan in Spain. Although the French Navy has not installed MESMA in a submarine, it has been sold to Pakistan for fitting to new Agosta-90B type SSKs.

The excitement over AIP has led to exaggerated claims about its potential. Some commentators claim that the advent of AIP has created a third category of submarine, the SSK+AIP, but the fact remains that only one navy has a modern AIP system operating. Three more will have systems in service after the turn of the century (counting Italy's acquisition of the Type 212 design), but a number of experienced operators are still not sufficiently convinced to commit themselves.

AIP enthusiasts point to potential developments. The CCD system has great promise, with such improvements as electronic fuel-injection and electronically actuated valves. These improvements will allow the operator to select engine-characteristics from a menu of choices. The Solid Oxide Fuel Cell (SOFC) would use natural gas as fuel, resulting in a single propulsion system for surface and submerged propulsion. Siemens is also known to be working on a fuel cell using methanol as the base fuel to generate hydrogen.

In theory none of the weapons and sensors which equip SSNs are unsuitable for SSKs, but size is critical. A large internal volume is required to accommodate modern electronics and the fuel and batteries needed for reasonable endurance. As U-boats found in World War I, the number of weapon reloads is also critical in deciding how long a submarine can remain effective. As the number of sensors has increased, so has the demand for processing power and displays. Even automation is not the whole answer, because a minimum number of people are needed to cope with battle damage and system failures. Over-reliance on automation results in crew-fatigue on long patrols. During and after the Falklands War the Royal Navy's 'Obérons' were spending 42 days in transit and on patrol, 14,816km (more than 8000 miles) from a dockyard. The strain on the crew after such a long patrol has to be seen at first hand. Even after the Argentine surrender and the formal end of military activity some 'Obérons' had to avoid Argentine SSKs, not knowing what their opponent's rules of engagement might be. This meant that the British submarine had to behave as if her opponent was hostile, but without the ability to take any offensive action to remove the threat.

The prestige of submarines and their undoubted deterrent value means that more navies will acquire them in the next decade. But the enormous throughlife cost of SSNs and their unsuitablity for inshore operations means that the SSK will remain a much more attractive option for the lesser navies. US Naval Intelligence predicts that many more SSKs will be in the hands of non-aligned or unstable countries. Iran's acquisition of three 'Kilos' since 1988 caused something close to panic in Washington, although the Iranians seem to be interested only in safeguarding their coastal waters from hostile incursions. It is a chilling thought that if Saddam Hussein had possessed submarines in 1991, the Coalition naval forces could not have operated with so much freedom in the Northern Gulf.
Posted by Mitch Williamson at Sunday, March 08, 2015
Email ThisBlogThis!Share to TwitterShare to FacebookShare to Pinterest
Labels: Technical
Newer Post Older Post Home