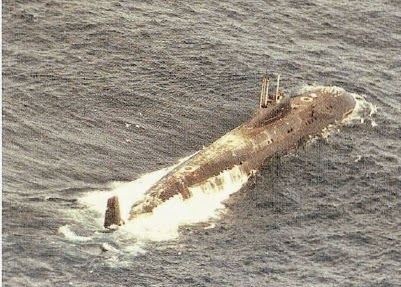 Approximately four Victor III class boats are currently operational with the Russian Navy, the only survivors of a total of 48 boats built from 1968 until 1993 in three distinct variants. By Russian standards they are relatively small but they are nevertheless well armed and equipped. The original Type 671 Victor I displaced 4,300 tons on the surface and could dive to 1,300 ft (400m); 15 were completed between 1968 and 1975. A further seven Type 671 PT Victor IIs entered service between 1972 and 1978 and these had a hull lengthened by 16ft (5m) and displacement rose to 4,500 tons. The current Type 671 PTM Victor II had a further section added to the hull, increasing the length to 345ft (105m) and displacement to 4,900 tons, and could be distinguished visually by a large streamlined pod mounted above the stern which contained the towed array sonar system. One boat was modified to incorporate a trials launch system in front of the sail for the SS-N21 missiles, which are normally fired from the forward torpedo tubes, and this boat is sometimes referred to as a Victor IV (Type 671 RTMK).

The last Victor IIIs built utilised eight-bladed propellers and are much quieter than their predecessors, and are almost comparable to the US SSNs in this respect. A total of 26 Victor IIIs were built, commissioning between 1978 and 1991, but today no more than four are active and all Victor I and IIs have been laid up or scrapped. In the long term the remaining Victors will be replaced by the newer Akula and Sierra classes, although construction of the latter appears to have ceased some time ago.