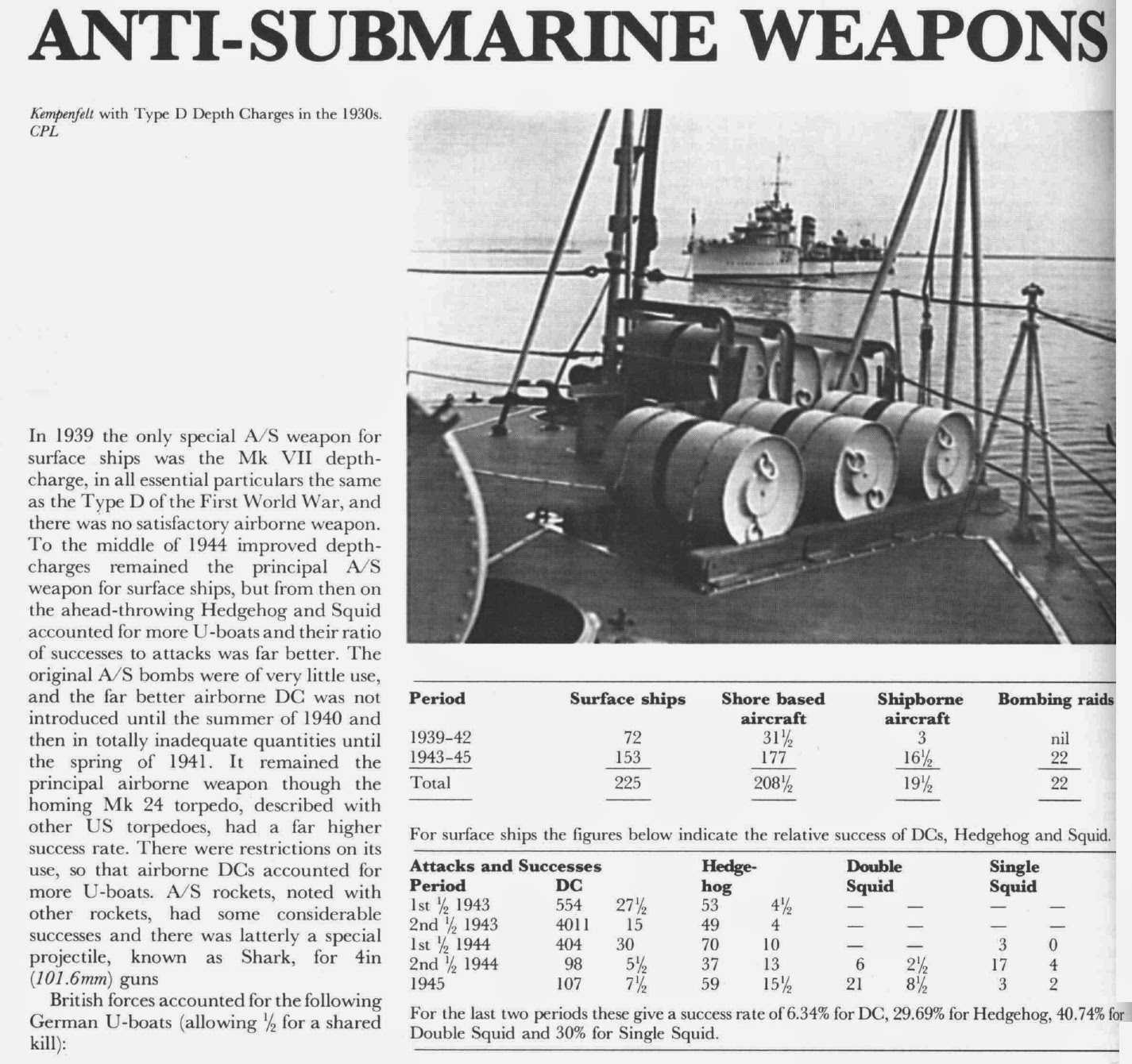 ASW is often assumed to have languished in the years after 1918, but even if budgets were cut much of the basic work had been done, and both the Royal Navy and the US Navy quietly set about equipping their destroyers with sonars. Other nations followed suit, but with varying emphasis, and as ASW was unglamorous it attracted very little attention.

The Royal Navy found that its Asdic-fitted destroyers were generally limited to 10 knots when sweeping an area, and then only in good weather. This meant that hostile submarines would be able to use their high-surface speed to alter the position relative to the convoy escorts. Although one or two submariners tried night attacks on the surface, where the escorts' asdics could not detect them, this innovation was not encouraged, largely because of the danger. The Royal Navy submariners thought principally in terms of attacking enemy warships, understandable because its likely enemies did not rely on seaborne trade to the same extent as the British Empire.

The Admiralty recognised the value of convoy, but was convinced that it would not by itself provide the answer to submarine attacks. A combination of convoy, Asdic and international agreements to limit the number of potentially hostile submarines was seen as the ideal solution. Unfortunately the financial stringency imposed in the late 1920s and early 1930s, coupled with a naive public conviction that another European war was 'unthinkable', made it impossible to create a strong ASW force. A modest programme of replacements for the 'Flower' class sloops was the best that could be done, but these designs were progressively improved until the basis for an efficient escort emerged in time for the naval expansion of the late 1930s. In the 1920s there was a large reserve force of destroyers, and it was presumably hoped that these could be hurriedly fitted with asdics and depth charges in an emergency. However, by the mid-1930s many of these had deteriorated badly, and were unfit for the rigours of war service in any capacity.

Despite the proven record of convoy and Admiralty support for it, there remained a core of enthusiasts who promoted a return to the discredited 'offensive' use of patrols. This clique was only checked by the shortage of ASW ships, and it was recognised by the Admiralty that existing and projected force-levels were too low to provide full protection. While the public mood remained so unrealistic, and air power fanatics were intriguing for the abolition of the Navy, the Board of Admiralty was reluctant to make any case for increasing expenditure on ASW. The understandable fear was that the Treasury would insist on balancing cuts in other critical programmes. An unfortunate side-effect was wishful thinking about the value of Asdic as the complete answer to the U-boat.

The US Navy suffered from much the same problem. Isolationism was rampant, so any attempt to win funding for defending convoys between the United States and Europe would be denounced. The existence of a huge reserve of destroyers also bred complacency, the assumption that an ASW force could be improvised.