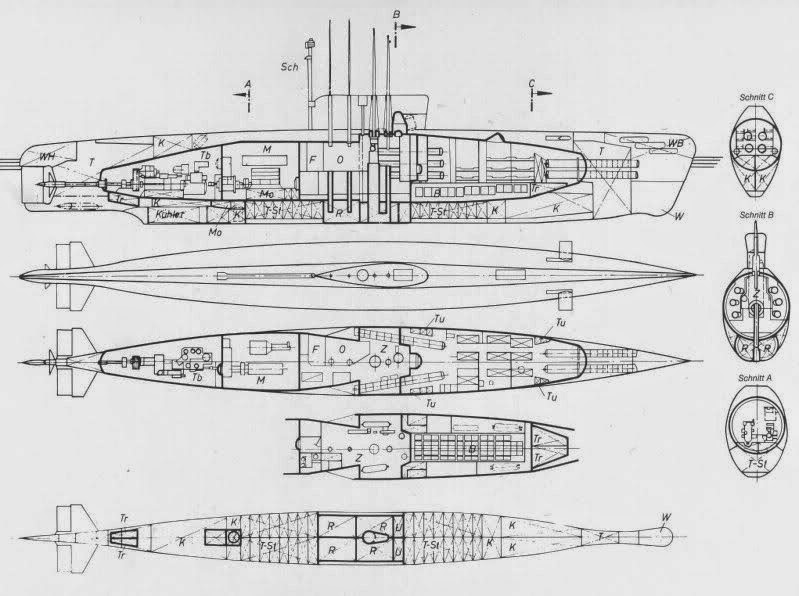 The Type XXVI was a high-seas U-boat propelled by the Walter Propulsion System. They would have had a crew of three officers and 30 men, with ten torpedo tubes, 4 at the bow and 6 in a so-called Schnee organ, and no deck guns. 100 contracts were initially awarded to the Blohm + Voss yard in Hamburg (U-4501 through U-4600) and sections were under construction for U-4501 through U-4504 when the war ended. The other contracts had been cancelled.

The Type XXVI Walter U-boat was intended to become the most important weapon in the German naval arsenal, with performance figures that would not be found in other navies until the nuclear age. Whether it would actually have lived up to these theoretical qualities is, of course, open to conjecture. There were four Type XXVI boats under construction when World War II ended. None were actually completed, so the true performance figures remain a matter for speculation among engineers.

The actual boats would have been numbered U-4501 through U-4504, had they been completed. The degree to which German industry had declined might be illustrated by the fact that these four boats were all that were begun out of an order for 100 units.

The projected performance figures included a submerged speed in the area of 22-25 knots, and a surfaced speed of at least 11-16 knots. A diving depth of about 1,000 feet was built into the design, though whether it could have been safely reached is open to debate. Other German designs intended to operate at such depths proved incapable of actually reaching it without serious leaking problems.

Armament would have consisted of ten 533mm (21-inch) torpedo tubes. Four would have been located in the usual place in the bow, with six more located approximately amidships, firing aft. Access for both sets of tubes would have been from the forward torpedo room.

The Type XXVI would have been the first German combat submarine to have its attack center located in the control room.

While the Walter turbine would have allowed a very high submerged speed for chasing down a target, or escaping an attacker, the need to carry huge supplies of the highly-corrosive hydrogen peroxide fuel limited the use of turbines. For normal propulsion, one of these boats would have used its diesel engine or electric motor. A Schnorchel was fitted, and the head would have been covered in the usual anti-radar coating and contained the most advanced radar detector available.

Other refinements, which were being tested at the time and might have been included, included the first wire-guided torpedoes.

Type XXVI was declined in 3 projects only Type XXVIW had time to undergo construction, estimated capacities:

Type XXVI W
Walter Submarines (Elektric Boot), U-4501 to U-4600
Displacement: Surface 842 tons, Submerged 926 tons
Speed: Surface 11 Kts, Submerged 24 Kts
Dimensions: 56,2 x 5,4 x 5,9 meters
Propulsion: 1 x 580 MWM, 1 x 265 MAN (generator), 1 x 7500 Walter, 1 x electric engine 536 cv, 1 x electric engine71 S
Fuel: Diesel 65 tons, H2O2 97 tons
Autonomy: 7300 nautical miles at 10 Kts, 158 nautical miles at 24 Kts
Armament: 4 TT, front, 6 TT sides
10 spare torpedoes
Crew: 35
Walter drive
U-boats using the Walter drive. This was the biggest R+D project in the Kriegsmarine and it would have had quite an effect if the drive had been reliable and safe. The Walter drive uses highly concentrated hydrogen peroxide (code name Aurol or Perhydrol) as a source of both heat and oxygen. H2O2 has a very high heat of decomposition so one gains quite a bit of energy just by getting to the oxygen in the compound. The oxygen is then used to burn a fuel to get more energy. The main safety problem is that H2O2 is rather unstable and explodes in contact with any organic matter. The main design problem is handling the high temperatures associated with the process. There is also a supply problem since the stuff is hard to make, especially during an air war.

Prof. Walter was a big promoter of H2O2 in various applications, notably U-boat drives, torpedo drives and rocket engines. The Me 163 was powered by a Walter rocket engine. Various other missiles had this power and there was a droppable JATO unit to help heavy aircraft get into the air. There was also a whole collection of torpedo designs, most with names ending in butt (a flat fish) like Steinbutt. These torpedoes typically ran at 45 knots with no wake and an 8,000 m range. The longest range one was Steinwhal which ran 21 km @ 45 knots. The Klippfish with 6500 meter range @ 40 knots powered by a Walter piston engine had passed all the tests to be put into production in 1942, but was held back in favor of the faster turbine models which then ran into technical problems and were not ready until early 1945.

Work on the Walter U-boat drives started in the mid-1930s. Most Walter experimental U-boats came under the Type XVII designation and several prototypes were built, but none went into production. Other Walter designs which never went into production were the XVIII, the hull became the basis for the XXI, the XXII, the XXVI and the XXXV. There were several versions of the Walter drive using pistons or turbines. Several prototype boats used the Walter drive successfully, but there were always problems. None of the drives ever became combat worthy. The safety issue of carrying over 100 tons of H2O2 was never adequately addressed and in itself precluded the use of the drive on the high seas. It was difficult enough handling the small amounts used in torpedoes. A lot of work was done on the Walter drives after the war, but no one ever used it on a combat submarine.

Another big disadvantage of the Walter drive was its limited range. The type XVIII for example carried 204 tons of H2O2 which would let it run for 200 NM @ 24 knots. After that, the machinery was useless. A coastal type, the XVII B could run 163 NM @ 25 knots using 55 tons of H2O2.

I would say the bottom line on the Walter experience was over ambition. It soaked up too much R+D money to the exclusion of anything else and the final product would have been vulnerable to radar during the march since it traveled on a Diesel. The larger Walter U-boats were basically unfeasible for safety reasons and that should have been obvious at the time. On the other hand, the Walter drive was a natural for torpedoes and possibly feasible for small coastal or harbor defense U-boats.

The idea of using the Walter drive in U-boats goes back to before 1933. Actual experimental work apparently started in late 1934. The first experimental U-boat, the type V 80 (80 tons displacement) was launched in 1940. Several full sized boats followed including U-792 and U-794. One of the later large boat designs, the Type XVIII, led directly to the Type XXI electoboat when it became apparent that the Walter drive would not be combat ready for some time.

The Walter drive never made it as a submarine propulsion system for three reasons. No one ever got it to work reliably, certainly not during WWII. H2O2 at the high concentrations under discussion (80 - 85%) is a very unstable compound which is difficult and dangerous to handle, especially in large quantities. Reliably storing something like 200 tons of it on a submarine under combat conditions would have been extremely dangerous. There was also the issue of availability in the required quantities. Finally, the peroxide itself plus all the machinery was usable for something like 8 hours at top speed. Once the H2O2 was gone, the Walter drive became just so much ballast. It should have been apparent by 1942 that this project was a waste of resources and would not lead to a usable result in time to affect the war, however, it offered some useful spinoffs, the hull design for the electroboat and a feasible torpedo drive.

The CO2 which was produced as the only gaseous combustion product was compressed and sent overboard where it dissolved in sea water before it could rise to the surface.

Work on the Walter torpedoes began in 1938. The first model called Klippfisch, used a piston engine and ran 6500 meters at 40 knots. It reached combat status in 1942, but was never produced because a turbine driven mode, the Steinbutt, promised better performance - 8,000 meters at 45 knots. There were many problems with the turbine drive and a whole collection of versions followed all with similar performance. There were also a few long range models which used sea water injection. The best one - Steinwal - could run for 21,000 meters at 45 knots leaving no visible wake. These torpedoes turned out to be unreliable at long range since the mechanism picked up too much salt from condensed sea water. For comparison, the standard high speed torpedo (T I) was steam powered, used compressed air, ran out of fuel after 6,000 meters at 44 knots and left a clearly visible trail of nitrogen bubbles.

Apparently no Walter torpedo reached combat. In retrospect, it is clear that the Walter drive is more applicable to torpedoes than to U-boats and therefore the work on torpedoes should have been stated much earlier and with higher priority. In any event, the handling and storage problems were known at the time and it would have been a lot more realistic to concentrate on a device which uses a few hundred liters of H2O2 instead of a few hundred tons.

A Type XXI armed with wire guided Steinbutt would have made a rather interesting weapon considering the Type XXI sonar was accurate to ½ degree. There was a wire guided torpedo project called Spinne which carried 5,000 meters of wire. Such a torpedo could be guided into a 20 meter wide zone at a range of 2,000 meters without showing a periscope.

Here is how this remarkable engine operated:

The major propulsion system components were:

1. Fuel tanks for theH202 and Fuel Oil. The H202, at a concentration of 80 - 85 percent, was stored in a polyvinyl chloride bag liner within a steel tank vented to the sea. Hydrostatic pressure kept a positive pressure on the H202 feed pump. As the H202 was consumed the bag collapsed and the H202 volume in the tank was replaced by sea water.

2. Three shaft driven metering pumps supplying (1) fresh water from the condenser/cooler, (2) H202, and (3) fuel oil in the ratio 12 to 9 to 1 sent to the catalytic converter and combustion chamber.

3. A catalytic chamber containing porous porcelain "stones" coated with calcium, potassium, or sodium permanganate operating at a temperature of about 930 F.

4. A combustion chamber operating with a flame temperature near 4000F. Fresh cooling water from the condenser/cooler was circulated around the chamber to maintain desired temperature before being admitted to the chamber.

These were the main components of the propulsion system. The engine ran as follows: H202 was pumped into the catalytic converter where it broke down in to H20 (steam) and 02 at high temperature. From there it was admitted to the combustion chamber (steam generator) and mixed with proportioned amounts of fresh water and fuel oil. The high temperature steam generated (1020F) was then fed to the steam turbine turning at about 14,000 rpm. The turbine operating fluid was about 94 percent steam by volume and 85 percent by weight. The turbine exhaust consisted mainly of water vapor (steam), traces of C0, and C02. From the turbine the exhaust flowed into a contact type condenser. The non-condensing components were pumped overboard by the rotary pump. In an early version of this engine these gases were forced overboard by the turbine backpressure. Spray water for the contact condenser was cooled by circulating sea water through the water cooler. Cooled fresh water from the condenser/cooler was pumped back into the combustion chamber where it was again mixed with disassociated H202 from the catalytic converter and fuel oil to complete the cycle.

The Walter engine was an innovative and imaginative concept advanced for its time but probably doomed from the start as a submarine propulsion system by the extraordinary handling problems, safety issues, and costs associated with the Hydrogen Peroxide fuel.